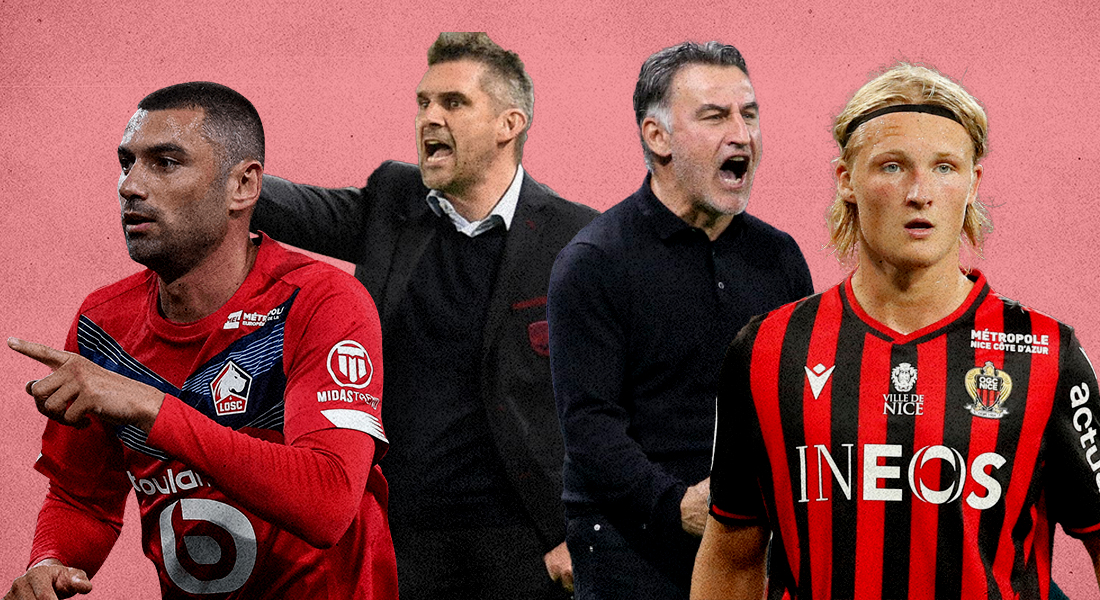 Lille returns to the Stade Pierre Mauroy as the Champions of France for the first time. The defending champions Lille welcome Nice with headed by a familiar face in Christophe Galtier. Both sides drew their first games in the new campaign. A win could morally boost Lille’s chances of defending the title. Similarly, Nice would look to continue their rise in the league with a statement victory.

Jocelyn Gourvennec was handed the reins at Lille following the departure of Christophe Galtier. Galtier led Lille to the league title in one of the best title races in the league’s history. He built a team from hard-working players like Burak Yilmaz, Renato Sanches and Jose Fonte and made the champions. Despite the sensational league win, a financial crisis at Lille meant they couldn’t hold onto him. Gourvennec’s appointment didn’t convince the fans and his debut didn’t help his cause as well. Lille were trailing 3-1 to underdogs Metz and needed a late own goal to draw level at 3-3. He must register his first win to ease the nerves and win over supporters.

The league title-winning Galtier was snapped by Nice as part of the Ratcliffe revolution. Jim Ratcliffe, a British billionaire took over Nice in 2019 and has been backing the club well to see success in the future. He has backed the club well and invested in youth policy. Galtier’s appointment would surely fast-track their progress. They started the new campaign with a 0-0 draw against Reims. Despite dominating the proceedings, they weren’t able to score a decisive goal. Hence, Galtier would look for a momentum giving victory.

Gourvennec has no injury concerns to worry about before picking his squad. Tiago Djalo is suspended for two games following his skirmish with teammate Xeka in the preseason. From his first match in charge, it was evident that Gourvennec favours the 4-4-2 formation. Lille thrived under Galtier in the previous season and his successor is sticking with it.

Burak Yilmaz would lead the line alongside Jonathan Ikone. Renato Sanches should be managed carefully keeping his fitness issues in mind. The rest of the lineup might be unchanged.

Galtier has a fair share of injury troubles to deal with. Midfield duo of Morgan Schneiderlin and Alexis Claude-Maurice are long term absentees. Calvin Stengs, Alexis Trouillet, Evann Guessand are also doubtful ahead of the game.

Nice are expected to play in a 4-4-2 to suit Galtier’s strengths. Euro 2020 hero Kasper Dolberg might return to the lineup after making a cameo off the bench in their opener.

The Turkish international was in red hot form as he spearheaded Lille’s title challenge. He had 16 goals to his name and a further of five assists. Yilmaz has sharp movement in the box with predatory instincts. He also shoots well outside from the box if denied space inside the box.

He suffered a disappointing Euro 2020 with Turkey and would like to put it behind him. Yilmaz scored one goal in the new campaign already and picked up where he left off in the league.

The centre-back duo of Todibo and Dante need to be on their toes to prevent the sharpshooter from getting in behind.

Dolberg had a decent season last time with Nice and headed to the Euros as a hopeful for Denmark. He had to wait for his time at the Euros and when it did come, boy, he took it well. Dolberg scored three goals for the Danes in the knockouts as he took them to the semis.

Finding his form for his country. 🇩🇰 pic.twitter.com/NtBcjyClg8

He impressed everyone with his passing and linkup play on Europe’s biggest stage. Back at Nice, he was slowly gelled into the team after an extended summer. He would be pushing for a starting spot against Lille.

Lille’s defensive midfielder Andre should organize his lines well to break Dolberg’s linkup play and prevent the striker any space and time on the ball.

Christopher Galtier knows the Lille side in and out. He knows the strengths of his team and also the obvious weaknesses. Gourvennec should train his charges not to fall into the trap of their previous manager.

Both sides deploy a 4-4-2 and could cancel each other tactically. Also, both sides would be desperate for a win to get running in the campaign.

Considering the level playing field, FootTheBall predicts an entertaining 2-2 draw as Lille and Nice might negate each other successfully.