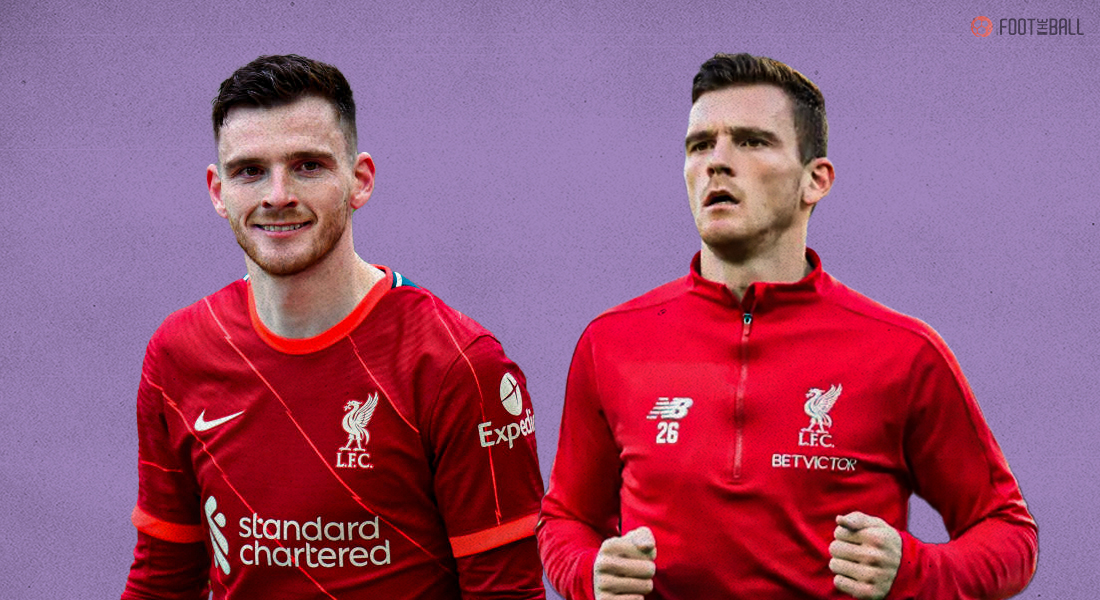 Liverpool might have to do without their first choice left-back Andy Robertson after the Scot sustained an ankle injury in the Reds’ pre-season match with Athletic Club at Anfield on Sunday.

The former Queen’s Park player was attempting to block a cross when he sustained the injury to his ankle in the first half of the match. 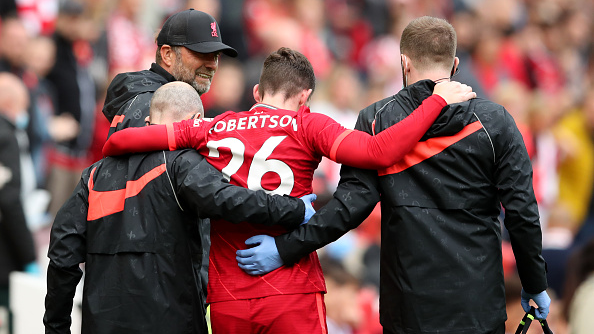 Liverpool have issued a statement regarding the same, saying that the damage will be assessed with the help of a scan to ascertain the extent of the injury.  (FPL managers who have Andy Robertson in their squads will be closely monitoring the situation)

Meanwhile their manager, Jurgen Klopp refused to comment on the injury before Robertson’s ankle had been examined by medical professionals.

As once again a Liverpool defender’s season is put in jeopardy due to an injury, FootTheBall looks at how Robertson’s injury will possibly affect the Reds’ season in 2021-22 and how they can cope with it.

The former Dundee United player may have to spend a significant amount of time recuperating from the ankle injury that he has sustained and this might complicate matters for Jurgen Klopp with the new season in the offing.

Your support today was amazing! Thank you for all your messages, I’m positive but let’s see what tomorrow brings! #YNWA pic.twitter.com/tOFvWrvNgG

The German manager has had to deal with a host of injuries to first-team regulars such as Virgil van Dijk last season against Everton. The Dutch captain suffered an anterior cruciate ligament injury in the 2020-21 season after receiving a challenge from English goalkeeper Jordan Pickford.

The former Southampton player had to undergo surgery on his right knee and consequently, spent almost 9 months on the sidelines, even missing the UEFA Euro 2020 tournament this summer to continue his recovery from the injury.

And now with the new season just around the corner, Andy Robertson looks like he will be taking the space vacated by Virgil van Dijk on the treatment table for Liverpool due to his injury.

Such a development will obviously perplex Klopp who hopes of mounting a title challenge this term in the Premier League. Therefore, let us now assess the options that Jurgen Klopp has in front of him in the event of the worst-case scenario becoming true.

DEARTH OF OTHER ALTERNATIVES AT LEFT-BACK FOR LIVERPOOL

Since the last two or three seasons, Liverpool’s full-back positions have become synonymous with Trent-Alexander Arnold and Andy Robertson. 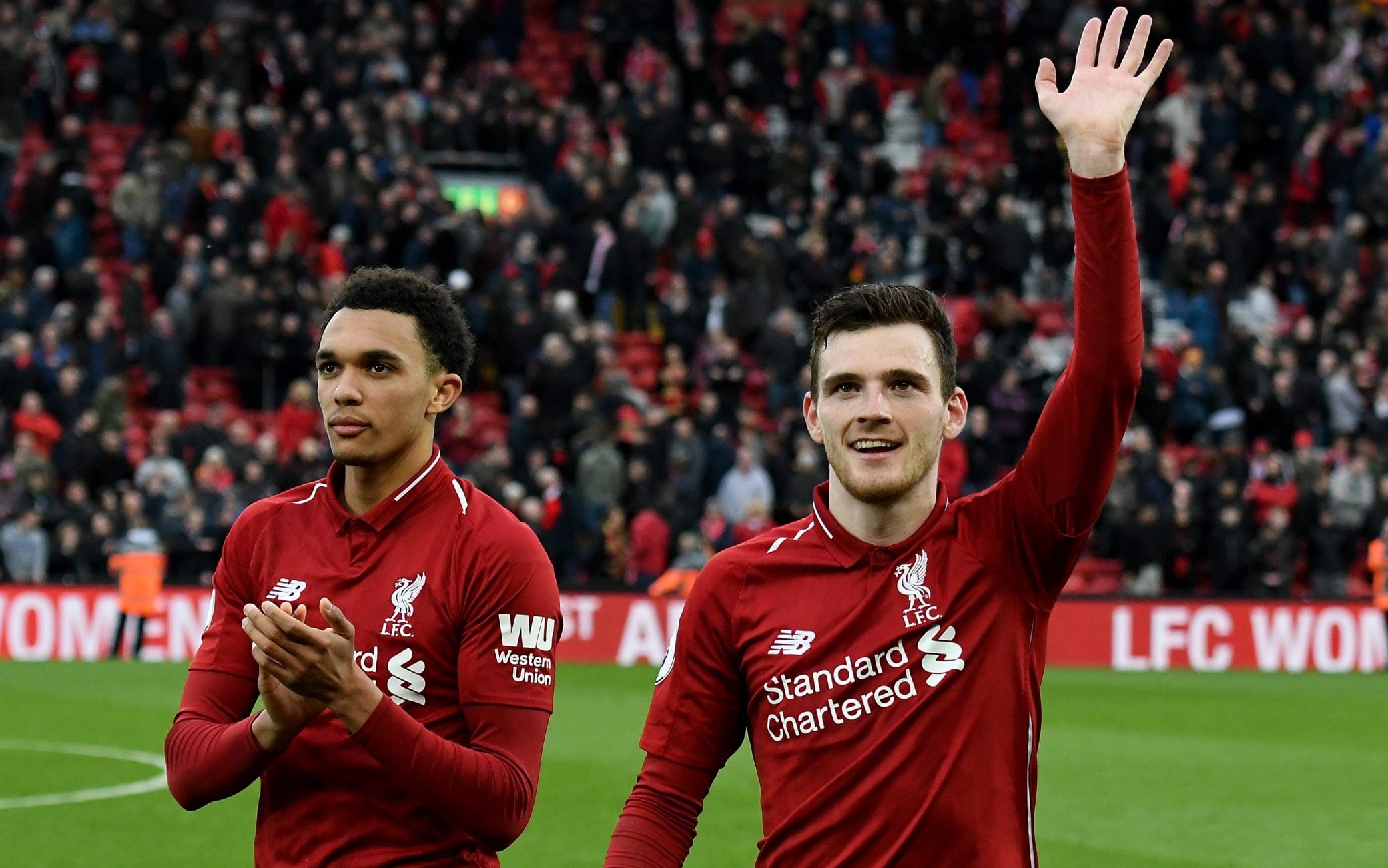 The British full-back duo have an excellent chemistry between themselves and are also productive in supplying crosses and pinpoint passes in the final third to the attacking players, therefore replacing them is quite a huge task.

If Robertson does have to spend a significant time on the sidelines, then Liverpool and Jurgen Klopp can exercise two options to fill in the left-back role for the Scottish national football team captain.

The first option that Liverpool and Jurgen Klopp can make use of is to play Greek left-back Konstantinos Tsimikas alongside Trent-Alexander Arnold as the team’s two full-backs while Andy Robertson recovers from his injury.

The former Olympiacos defender signed with the Reds in the summer of 2020 and is contracted with the Merseyside club until 2025.

Last season, Tsimikas had injury woes of his own as a knock to his thigh and a knee injury kept him sidelined from playing in the Premier League for the majority of the season.

On such occasions when he was fit to play, the 25-year old featured on the bench for the Reds as Andy Robertson was clearly preferred ahead of him due to obvious reasons. This resulted in the Greek defender only clocking 5 minutes on the pitch in the Premier League.

Therefore, he is still an inexperienced player in terms of outings in the English top-flight and might need to spend some more time as an apprentice before becoming the master.

The other option for Liverpool and Jurgen Klopp is to play veteran football player James Milner as the team’s left-back in Andy Robertson’s absence.

The seasoned Englishman is renowned for his strength, versatility and threshold for physical agility, having at times played as a full-back in addition to playing in his usual midfield role.

At 35 years of age, there is no slowing down the former Manchester City player be it on the training ground or on the pitch as his unwavering willingness to help out the team makes him one of the mainstays of this Liverpool team despite him being in the mid-thirties.

Therefore, playing James Milner at left-back if Andy Robertson spends a long spell on the sidelines looks like a sensible decision for Jurgen Klopp (some might even say that it’s a no-brainer).

Milner has, in the past, shown that he is more than capable of filling in the full-back role in the event of an injury to the first choice defender and certainly can cover for his British teammate this time around too.

In the long-term, Robertson is one of those players whose value to the team, even beyond his goals and assists, is irreplaceable. Just like Liverpool missed Van Dijk so dearly last season, they’ll be looking at a similar scenario if Robertson’s injury is serious. Medical results will be anxiously awaited ahead of the start of the new season.