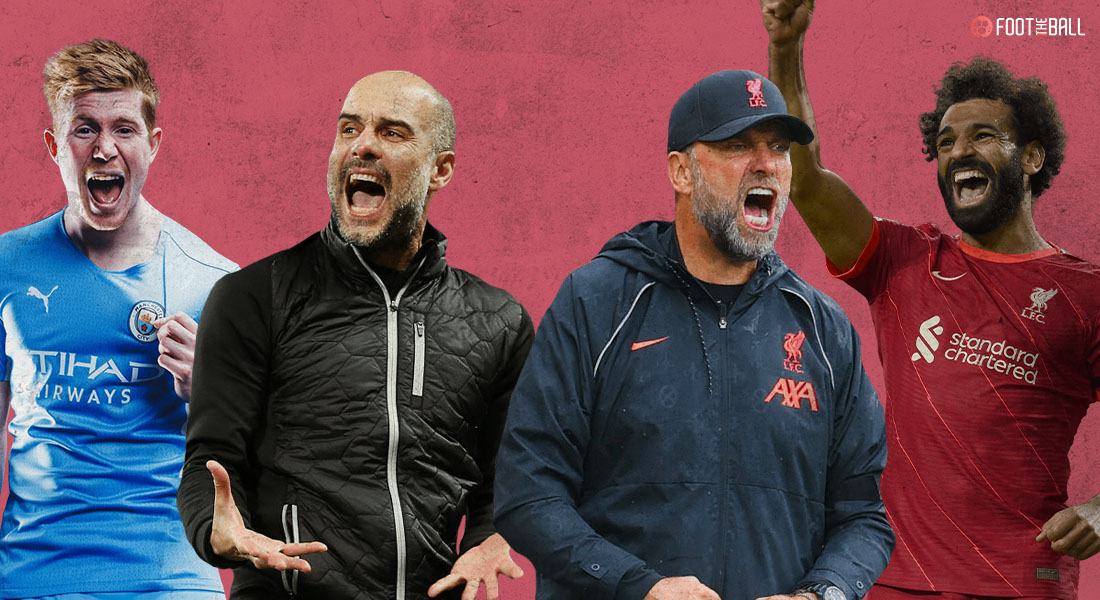 It is perhaps telling of the ‘rivalry’ between Manchester City and Liverpool, that ahead of their latest meeting at Anfield on Sunday afternoon Reds manager Jurgen Klopp was apologising to his counterpart for annoying him with his comments in the press. There is a clear sense of solidarity between the two managers and their sides, something that has not been the case in the Premier League over the years.

For all the iconic battles in the recent past – from the 4-3 thrilling Liverpool win in 2018 to the John Stones goal-line clearance game in early 2020 – there has been little malice in the rivalry. There is no Keane vs Vieira in the tunnel or Ferguson vs Mourinho in the press room. The rivalry is one of pure tactics, a clash of ideas, each of which makes the other better.

In the past few seasons, the clashes between the two sides have been an apt representation of where they lie. In 2017-18, Guardiola’s side thumped Liverpool 5-0 at the Etihad exposing a team that was very much missing a few parts in the shape and size of Alisson and Virgil van Dijk. Liverpool did get them back at Anfield, the 4-3 win that showed them at their attacking best and their defensive worst, a work in progress.

A seven-goal thriller against our next opponents 😱

The next season was much closer. A missed Riyad Mahrez penalty meant points were shared on Merseyside, a rare dull match with two giants sizing each other up. The match at Etihad was decided by a matter of centimetres and with it, the title. Manchester City were better but only marginally and Klopp’s side were coming for them.

Two years have passed since that bonkers John Stones goalline clearance and @ManCity's 2-1 home win against @LFC on the way to the title.pic.twitter.com/Zub8eadNN9

The 2019-20 season was a (temporary) changing of guard – Liverpool triumphing 3-1 at Anfield with Pep Guardiola having a breakdown of sorts on the touchline. Reds were near perfect but had the rub of the luck which was their season in a nutshell. Post-lockdown they were sluggish and stumbled to the title, losing 4-0 at the Etihad the week after securing their first league triumph in 30 years.

Last season was a reversal, the game at Etihad was a draw with both sides missing good chances uncharacteristic on the whole but apt for the first half of the 2020-21 season. By the time the return at Anfield came around, Manchester City were imperious and Liverpool on the wane. A mistake ridden game by Klopp’s side handed City a 4-1 win.

The two sides clash again, as close as they have ever been, in terms of both points on the board as well as quality on the field. Manchester City have the inertia of their Premier League win last season but have clear shortcomings. Despite the arrival of Jack Grealish, they have not addressed their striker problem and early signs are that they may not get away with it again.

Liverpool were cautious in the market but the signing of Ibrahima Konate filled the most gaping hole in the side and the emergence of their youth products has helped. They have started the season better too, but there is a sense of susceptibility.

THERE ARE NO WORDS FOR WHAT WE HAVE JUST SEEN

Perhaps for the first time in four seasons, neither side is the favourite for the league title. Chelsea have spent hundreds of millions of pounds over the past two summers and have a system that works with a squad that does not have any problems if everyone is firing.

And under these circumstances, Klopp and Guardiola meet as equals, looking to extend their duopoly at the top of the English football pyramid for another season. The Last Dance trope has become overused since the Netlfix series but this season that may be true for this rivalry.

Liverpool have an ageing squad – the core of Salah, Mane, van Dijk, Henderson, Firmino, and Matip are all over 29. So is Alisson but goalkeepers have a longer shelf life so he should still have a few years in him. It is clear that they need a big rebuild and Klopp is slowly making the changes happen behind the scenes but time is not on this team’s side.

Manchester City have a much younger core and they have already moved on most of the players that got them the 2017-18 title but there is a sense of instability at the club. For the first time in a decade perhaps, they did not get their top transfer target in the market. Guardiola has already talked about leaving albeit a couple of years in the future. There have been grumbles about unhappy players and an air of instability around the club in general.

This won’t be the last time these two greats face off against each other but it may be the last significant one. The football world has been much the better for it, as have been Klopp and Guardiola themselves. Guardiola got the bulk of the domestic trophies but missed out on ol’ Big Ears. Klopp got the European success and perhaps the ideological battle with his gegenpressing style but one league title in over six years does not rewrite history books. The initial battles were fought but it is the last one that decides the war. Who wins it?