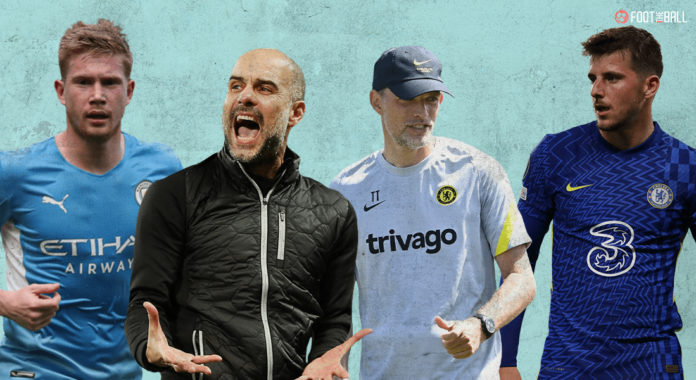 The defending champions have been ruthless in going about their business, sitting 10 points clear at the top.

Pep Guardiola’s side are undefeated in their last seven matches across all competitions, winning memorably right at the death against Arsenal last time out. City have had a week’s rest and training to prepare for this crucial tie, where a win will almost certainly strengthen their case of winning the league crown again.

More of our best against tomorrow's opponents! ⤵️

The return of the COVID-affected players will be a further boon for Guardiola, and they remain the top scorers with 53 already this season. City have been in imperious form for much of the campaign, and will definitely fancy their chances at home to extend their lead further.

Chelsea completed a comfortable double over Spurs to enter the final of the Carabao Cup. Granted they will not be as fresh as their opponents, only getting two days to prepare but Thomas Tuchel has been on a roll since his arrival in England.

Romelu Lukaku is firmly in the good books of both manager and fans as he continues to start up front. Tuchel’s team have not shown the same defensive solidity that they showed last season but with Antonio Rudiger in top form and Malang Sarr being publicly appreciated for his appearances, the Blues seem to be getting better.

They desperately need a win at the Etihad, having drawn four of their last five league games, knowing they cannot afford to fall further behind in the race.

City will be missing their leading goal scorer across all competitions in Riyad Mahrez who is away on AFCON duty. Kyle Walker should slot back in at right back with Joao Cancelo moving to the other flank.

Tuchel welcomed back N’Golo Kante and Thiago Silva last night, both of whom should immediately slot back into the starting lineup.

The battle down the flanks will be an interesting watch and City certainly have the upper hand on paper. Raheem Sterling has thrived since being given a consistent run of games and that has helped him score seven times in the league already. Playing down his usual left flank, Sterling’s low centre of gravity and uncanny ability to pounce on the rebound inside the penalty box has helped him score throughout his career.

Raheem Sterling either scored or assisted in every Premier League game in December:

The month where he joined the 💯 club. pic.twitter.com/YM3kfjuMpX

Cesar Azpilicueta is a fine athlete but he will certainly feel overwhelmed by Sterling and Cancelo on his side. Sterling knows that he can carry the ball over long distances and City are expert in switching the ball from the back quickly. Chelsea have three bulking defenders but Sterling can utilise his nous to isolate defenders out of their position in order to free runners in behind too.

Mason Mount is having yet another fine season at the top level, having already bested his goal tally in the league from last season. Seven goals and five assists sees him lead both charts for the Blues, with his number 10 role key in dominating teams. Mount has refined his play in order to play all types of passes, including crosses, through balls, and from set-pieces.

The 23-year-old also has a knack for waltzing through defences on the counter, and his versatility in movement allows him to pick up the ball wherever on the pitch. City will be glad to have Rodri back in order to deal with Mount but it will not be all plain sailing. Kante’s return will give Tuchel another quick runner to support Mount and the forward line which can overload bodies in attack.

City claimed a narrow 1-0 win in the reverse fixture and they will gladly take a repeat this time. Chelsea have no resort but to win, as they have to put an end to the run of draws immediately. FootTheBall predicts a 1-1 draw between the two behemoths.