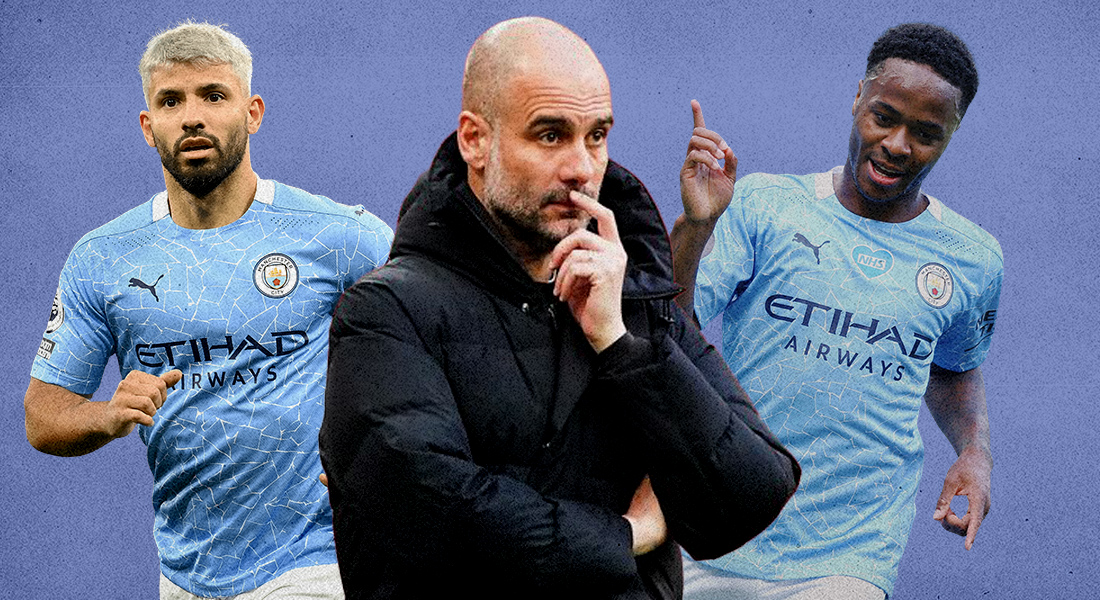 A really impressive season might be coming to a really difficult end for Pep Guardiola and his men at the Etihad. With fixtures coming thick and fast and still 3 competitions to play in, Manchester City look like they are declining in form with still some big matches to play.

With their quadruple dreams shattered after an agonizing 1-0 defeat to Chelsea courtesy to Ziyech’s goal, Manchester City are aiming for the treble this season with the EFL cup Final coming weekend followed by a semi final clash against the reigning French champions PSG.

The Blues from Etihad just need a mere 8 points to win the title in England this season but fixtures coming so fast and they’re weaknesses being exposed multiple times against the likes of Leeds United and Chelsea on the counter might be a huge concern for Pep. Leeds caught out City on the break multiple times in their 2-1 win despite being down to 10 men. Manchester City had to fight really hard to grind out 3 points against Aston Villa too after Stones received a red card early in the game.

Manchester City’s form is not their only problem coming to the end of the season. Some of their key players are either out of form, injured or dropped out of favor.

Manchester City’s MVP, Kevin De Bruyne faces an anxious wait to find out the extent of his ankle injury which forced him off the pitch against Chelsea in the FA Cup Semi-Final.

De Bruyne may have sustained a ligament damage to his right foot after the Belgian international was involved in a clash while fighting to win the ball against French international N’golo Kante.

An update on @DeBruyneKev's injury…

The injury could keep him out for over a month during which he would miss the cup final against Tottenham and both the legs vs PSG. The Belgian might make it just in time for Chelsea’s game next month in the Premier League.

The Belgian has been involved in 16 goals this season with 11 assists and 5 goals. He has been the heart of this City team. Before he was forced off against Chelsea, he looked to be the only one player in the team  who was looking to make things happen. Losing Kevin De Bruyne for a month would be a huge loss to Pep Guardiola and Manchester City.

After having a very impressive start to his season, sterling’s form has been depreciating for a while. The former Liverpool man has just scored 1 goal in his last 15 games for Manchester City, that goal coming against Arsenal which proved to be the winner.

Words were exchanged between Raheem Sterling and Pep Guardiola earlier this season. Now Sterling's form on the pitch and situation off it are also concerns… #MCFC

This run of bad form has led to Pep constantly dropping him out of the form with either Phil Foden or Ferran Torres taking his place. Sterling not only has been on a poor goal scoring form but also keeps away the ball cheaply multiple times in a game.

With De Bruyne’s injury concerns, experienced players like Sterling will have to ride up to the occasion and ride the next couple of months out.

Against both Leeds and Chelsea, City looked extremely vulnerable defending on the breaks. City also had a real hard time getting past their very systematic press and counter press.

Tuchel’s compact 3 at the back also made life difficult for City’s 3 forwards, giving them no space to work in. Werner’s explosive space opened Manchester City up completely multiple times.

Chelsea boss Thomas Tuchel sums up his thoughts on their 1-0 FA Cup semi-final win over Manchester City saying they deserved the victory pic.twitter.com/VGMm2tIPMD

Werner assisted a goal to Ziyech just after half time to give Chelsea the lead. It was exactly the same way City conceded minutes ago but the goal was ruled out because Werner turned out to be offside.

City were exposed and for one of the few times this season looked vulnerable at the back. PSG boss Mauricio Pochettino and Spurs will take note.

In his interview Pep Guardiola made it clear how much he condemns The European Super League.

Official statement. Manchester City Football Club can confirm that it has formally enacted the procedures to withdraw from the group developing plans for a European Super League. 🚨🔵 #MCFC #ManCity #SuperLeague

Guardiola sarcastically claimed ‘it is an honour’ that he was the first person employed by City to publicly discuss the proposals, and added he had been left uneasy by the situation.

‘For all of us managers, it is uncomfortable,’ he said. ‘Presidents can talk more clear what is the idea for the future and where football is going to go.’

City led the way, along with Chelsea, in demolishing the Super League by withdrawing after fan protests, but the episode has left a sour taste.

Pep’s number 1 striker has had an injury ridden season this term and is expected to leave this summer. He had fallen out of favor under Pep off late and his second string Gabriel Jesus still doesn’t look ready to take over after him.

Mahrez, Foden and Gundogan have all seized their opportunities during the course of the season but the lack of a world-class centre forward was clear against Chelsea.

If De Bruyne is still sidelined, Sterling continues to struggle, and if Aguero is not at his best form, Kylian Mbappe and Neymar will show City what they are missing in their highly-anticipated European showdown.