La Liga’s title race goes down to the wire after leaders Atletico Madrid drew against Barcelona in an eventful 0-0 at the Camp Nou on Saturday.

The first half, surprisingly, was very open for both teams’ liking, which saw chances being missed left, right and centre by both sets of players. Last ditch defending from Clement Lenglet had stopped Angel Correa from opening the scoring for Atletico, who had the better opportunities than Barcelona.

Minutes later, Blaugrana’s best player after Lionel Messi, Marc-Ander ter Stegen had been summoned to keep out efforts from Yannick Carrasco and Marcos Llorente. But the moment of half came from Messi, who went on a trademark run and had his shot on target, just to be denied by a fingertip save from Jan Oblak.

In the second half, clear-cut chances were few and most of them were for Barcelona. Ousmane Dembele failed to head the ball into the goal after a brilliant move from Barcelona while Ilaix Moriba had a pretty good half-chance which was blocked by Felipe. In the dying moments, Messi’s freekick missed by inches after Dembele had been brought down at the edge of the box.

This result made Atletico remain at the top of the table with 77 points while Barcelona, with 75, jump into second place. Real Madrid, who are third with 74, face Sevilla in a crunch fixture on Sunday  and a win would see Zinadine Zidane’s men leapfrog their neighbours for the top spot.

Injuries are a part of football but when they occur in key matches, that too in a game in which the league title is on the cards, it dramatically changes the rhythm of both the teams which inherently shifts the course of the game.

Quarter of an hour into the game, Atletico had suffered first, as Thomas Lemar went down on the pitch with an apparent hamstring problem. After Saul replaced the Frenchman, it took Atletico a minimum of 20 minutes to regain their lost control and composure over the game. 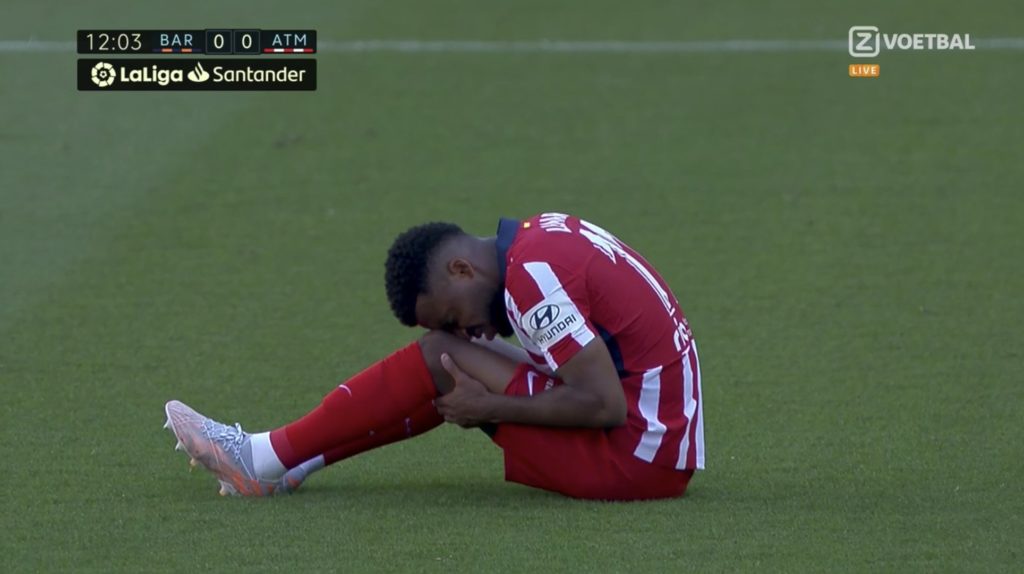 15 minutes later, disaster struck for Barcelona as their midfield general Sergio Busquets had to be substituted after a particularly nasty head collision with Stefan Savic. Although, he continued for a brief moment, he was brought off for Ilaix Moriba and was sent straight to the hospital for further scans for a reported concussion.

Alfred Schreuder: "I’ve talked to Busquets and he told me everything was fine, but we just have to know the results of the tests..” #FCB 🇪🇸

With Barcelona playing Levante in three days, they will hope that the Spaniard will return for the game, or else they would miss the thrust that Busquets provides from the midfield, which was evident today, as Barcelona weren’t at their usual fluidity after the substitution.

Both Marc-Ander ter Stegen and Jan Oblak were simply at their best and that was expected as this game was a very important game, given the context of the title race which also included Real Madrid. It was such that there had to be some kind of magic that had to be created out of nowhere to have their goalposts breached.

Ter Stegen was a quiet second half, but in the first half, Barcelona were bombarded by Atletico in the box and their defenders must thank their German teammate for not going a goal down in a crucial fixture.

They are The Reason Why Their Respective Club is still very much alive in The La Liga Title Race. 😎🧤 pic.twitter.com/PjKLvMJNCx

But the best save of the game came from Atletico’s superman Jan Oblak. The Slovenian, who was making his 300th appearance for the Rojiblancos, pulled off a miraculous save to keep out Messi’s shot which came after a sizzling, trademark run from the half-way line from the Argentinian.

In the second half, although they weren’t any clear chances for Barcelona, Oblak was level-headed and was setting up his defence to thwart any effort from Barcelona and succeeded very well in doing that.

The draw left Atletico on the table with 77 points in 35 games while Barcelona seized the second place with 75 points. But this result is hugely advantageous for Real Madrid, who are on 74 points and face Sevilla on Sunday. A win for Zidane’s men who would take to the top spot, although they would be level with Atletico on points but have a better head-to-head record.

If Real Madrid win, only a head-to-head record separates the top two and two points separate the top three, which means that La Liga’s title race is certain to go down till the last game week of the league, and for the neutrals it will be a fascinating watch while the players and supporters are bound to go through various kinds of emotions in the upcoming weeks.