Leicester City defeat eight-time winners Chelsea 1-0 in the 140th FA Cup final to lift the title for the first time ever in their history. Played in front of over 20,000 fans at the Wembley, the game for the most part was cagey to say the least as both sides were trying very hard to create chances in front of two robust defences.

In the first half, Çağlar Söyüncü had come close to scoring when he headed Youri Tielemans’ free kick over the bar from inside the box. Mason Mount had a strike from the edge of the area, but it deflected just wide of the post, winning them a corner.

Similarly, the second half too was a chess game, with both the teams trying to figure out how to breakdown the opponent and it became obvious that it was going to take something breath-taking to break the impasse between the two sides.

Breath-taking was what Tielemans produced in the 63rd minute after a poor clearance from Chelsea defence fell to the feet of Luke Thomas. He played the ball into the path of the Belgian who drove forward before blasting the ball into the top right corner from 25 yards out. 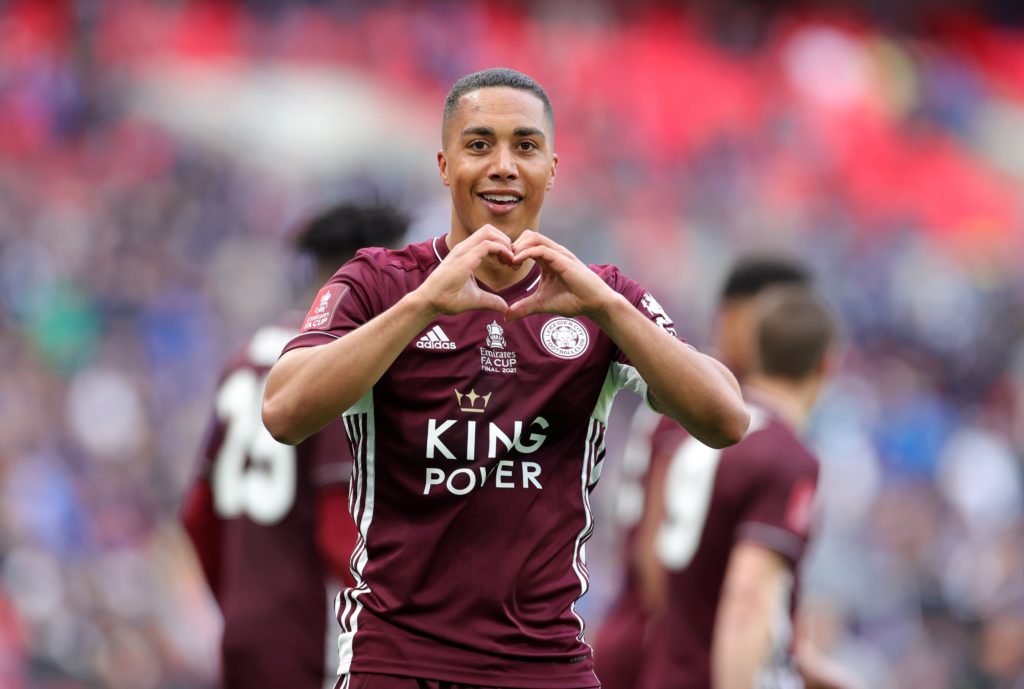 Tielemans celebrating with the Leicester fans after scoring against Chelsea in the final. (Image Courtesy: Leicester City / Twitter)

Then it was the turn of their captain Kasper Schmeichel, who kept out Chelsea from equalising with huge saves from a Kai Havertz header and a powerful drive from Mount.

In the final minutes, Chelsea appeared to have equalised through former Leicester player Ben Chilwell, but it was ruled out after VAR found the left-back to have strayed offside.

And until full-time, the Foxes held out to win English football’s most traditional competition for the first time in their 137-year history.

When the line-ups were announced, there was no surprise in the team that Thomas Tuchel selected that was going to play the final. But, after the game everyone noticed the change in positions Cesar Azpilicueta and Reece James were playing in.

Normally, when both of them play, James plays the right wing-back while Azpilicueta tucks in behind James as the right centre-back. But to everyone’s surprise, it was the other way round and it worked pretty well in nullifying the threat of Jamie Vardy on the counter as James is more than capable is dealing with Leicester’s talisman.

Defensively, Tuchel set his team up perfectly, and they only lost to a wonder goal. But offensively, Tuchel must try and encourage his players to create more and more chances which is important for them to finish in the top 4 and secure Champions League football.

It is a known fact that most of the time, finals and crunch games like the one on Saturday, are decided by special performances from special players and it was the turn of Youri Tielemans and Kasper Schmeichel for Leicester in the final.

Tielemans ran the show from midfield with his tenacity and calmness and also put in crosses into the box for the attackers to do their thing. But the best of all was his goal to take the lead.

To score from 25 yards, one needs courage and Tielemans had an abundance of it after deciding to shoot from that distance in a Cup final.

Whoever is trying to buy him must act quickly or else his stock is just going to rise and rise.

Even though Tielemans scored a spectacular goal to give Leicester the lead, Schmeichel was hugely responsible in maintaining that lead as he was brilliant in the second half of the game in which he pulled of two magnificent saves.

The first one was from a Kai Havertz header to which he dived to the right and stopped it from creeping in but the second one was the save of the game, after Mason Mount blasted a half-volley from the edge of the box to which the Danish keeper responded with a strong hand, preventing a sure goal for Chelsea.

This Schmeichel save 😱#EmiratesFACup @LCFC pic.twitter.com/g70YtNRcWp

Peter would be proud of his son in keeping the household name in high regards.

THE MAGIC OF THE CUP

What else can the FA Cup offer?

Filled with numerous thrills and frills, the 140th FA Cup final lived up to its name and more than anything it was the fans that lit up the occasion. Leicester fans holding up their club scarfs before kickoff against Chelsea, after returning to stadiums for the first time in nearly 18 months. (Image Courtesy: BBC / Website)

After what had been a disastrous 18 months in the lives of humanity, 20,000 football fanatics returned to the Wembley to watch two great teams battle it out.

And it did not disappoint. A remarkable strike from Youri Tielemans might have settled the match, but VAR, which was criticised heavily in the past few months, had triumphed in the right occasion, ruling out an right offside goal from Chelsea, which could have equalised the game had it not been struck away.

The Magic of the Cup truly living up to its billing.