CHELSEA THROUGH TO THE SEMIS? 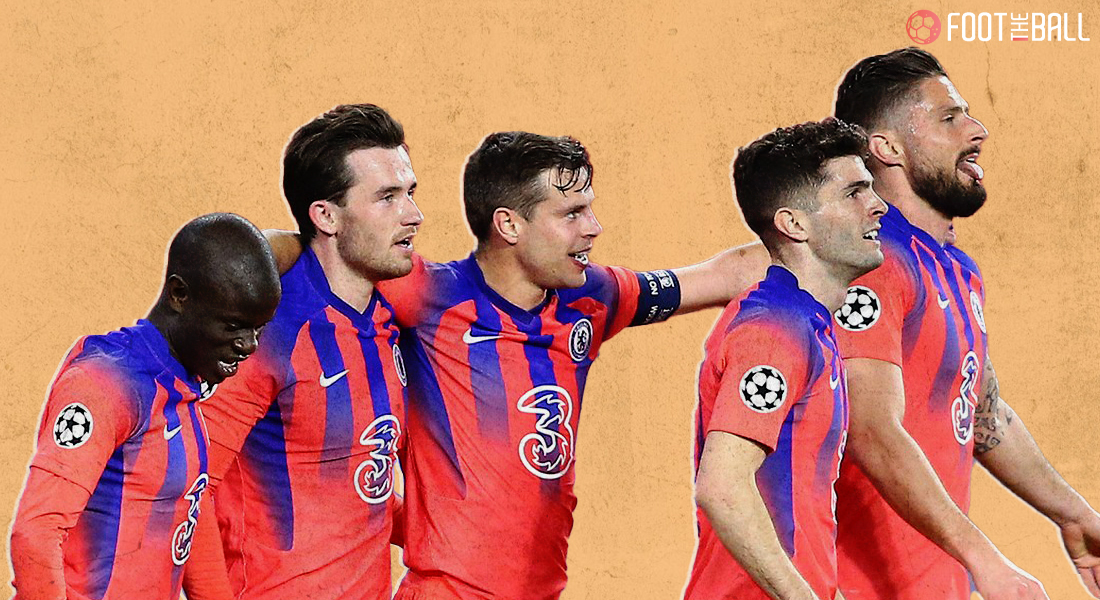 Chelsea move into the second leg of the tie with one foot in the semi-finals with a comprehensive 2-0 away win over Porto in Seville. 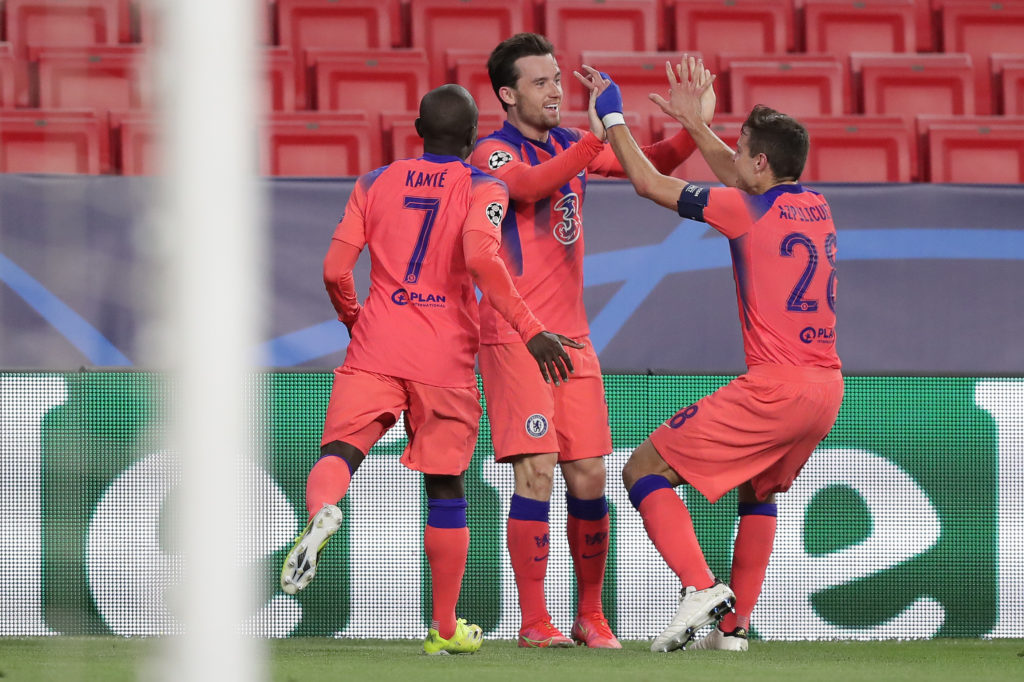 Mason Mount put his side into the lead in the 32nd minute after a sumptuous more to turn away from Chancel Mbemba before firing the ball into the bottom corner of the goal. Even though, Porto pressed for an equaliser, they could not convert their half-chances into goals, and it was Chelsea who went inches away from adding to the scoreline when Christian Pulisic, who came on for Mount, hit the woodwork in the 83rd minute.

But just after, Ben Chilwell rounded Porto’s keeper Agustin Marchesin to put the game to bed in the 84th minute. Here are 3 key takeaways from the fixture:

One wonders why Mason Mount is not talked about as much as other English youngsters such as Jadon Sancho, Phil Foden, Jude Bellingham. Maybe they are slightly more talented than him technically but none of them are talismanic to the club’s success as Mount is to Chelsea. The lone bright spot in a rather tumultuous second season under Frank Lampard, the Portsmouth-born youngster has not only kept his place in the side under Thomas Tuchel but also is one the first names on the team sheet.

Today’s stunning goal and performance makes people think why this boy’s talent is undervalued and is also an answer to why his managers at club and country trust him to perform in crunch games. It was Mount who took the initial responsibility of creating chances by passing it wide to the wingbacks or to the runner in Timo Werner before finally displaying a moment of magic to put Chelsea ahead.

His pirouette to create space away from Chancel Mbemba was magnificent to watch and was accompanied with a calm strike into the far corner.

Maybe now, the world of football will start to take in this 22-year-old and who knows where he could reach in the future.

After that horrendous defensive show at the Bridge against West Bromwich Albion, Chelsea put up a much-improved performance in Seville as they kept a clean sheet although there were shaky moments at the start of each half.

Tuchel, somewhat surprisingly, opted to start Antonio Rudiger, who was reported to have had a training ground bust-up with Kepa Arrizabalaga at the weekend, alongside Andreas Christensen and captain Cesar Azpilicueta and the German put in a convincing performance as it was enough to keep the Porto attack quiet for most parts of the game.

The pivot of Mateo Kovacic and Jorginho did their job of shielding the defence to near perfection and Tuchel will be happy with the team’s defensive performance as a whole when compared to the dreadful display on Saturday. 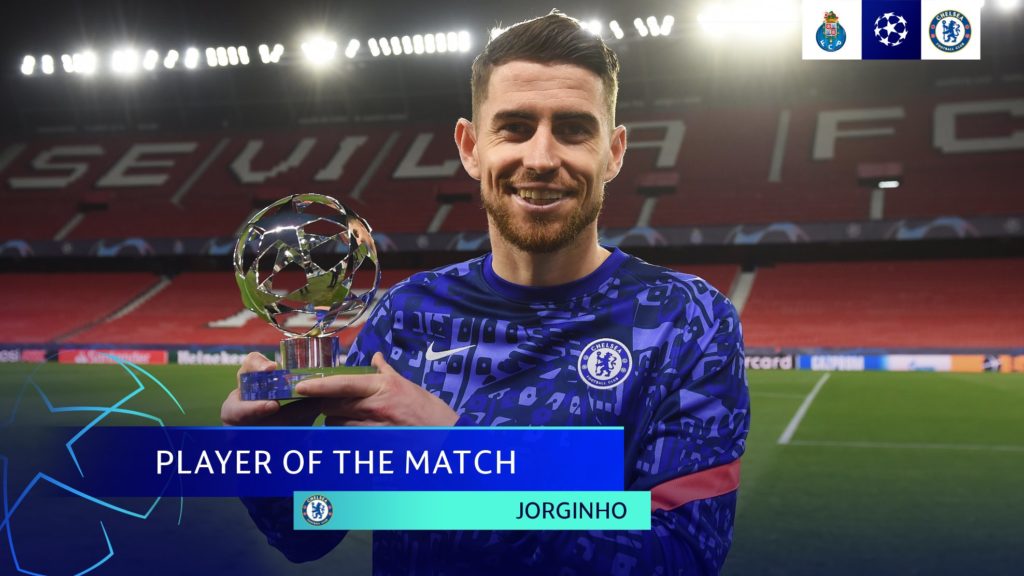 Jorginho with his Player of the Match award after a near-perfect display which capped of with an assist for Mount’s opener.(Image Courtesy: UEFA Champions League / Twitter)

Even though Chelsea carry a healthy lead into the second leg of tie, one should not discount this Porto side as they capable of defeating any side in world football on their day. The game was not as easy for Chelsea as the scoreline suggests with Porto having several half chances and, on another day, it would have been quite different. Sergio Conceicao and his players will have to take the many positives from this game and use it to their strength in the return leg. 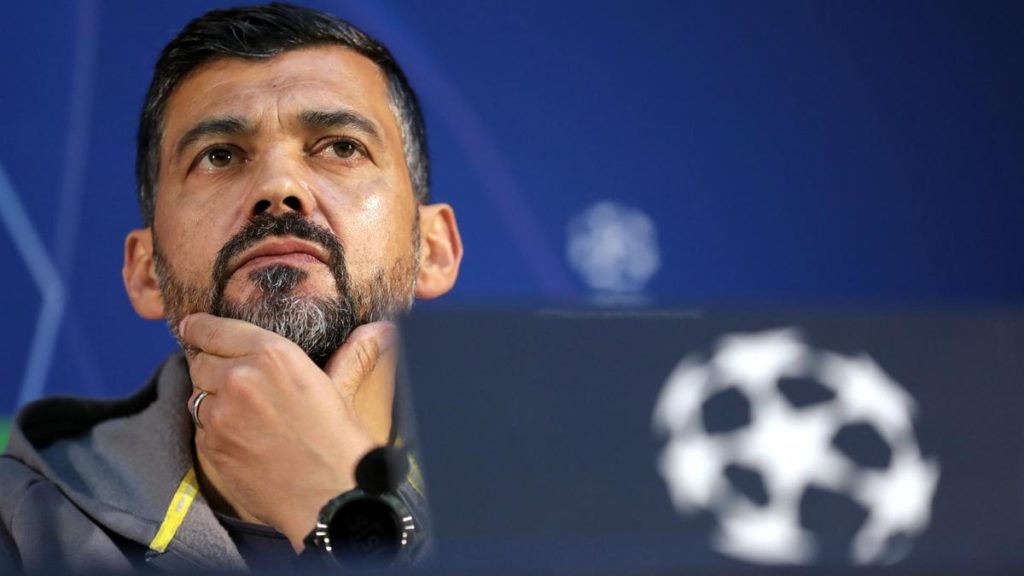 Tuchel, however, is a pedigreed Champions League manager to know that Porto will not go down without a fight and will be determined to let his side know that complacency wouldn’t be entertained in the second leg. Everything points to blockbuster semi-final between Chelsea and Real Madrid, but hey, football is a funny game and funnier things have happened in the past. You just never know.