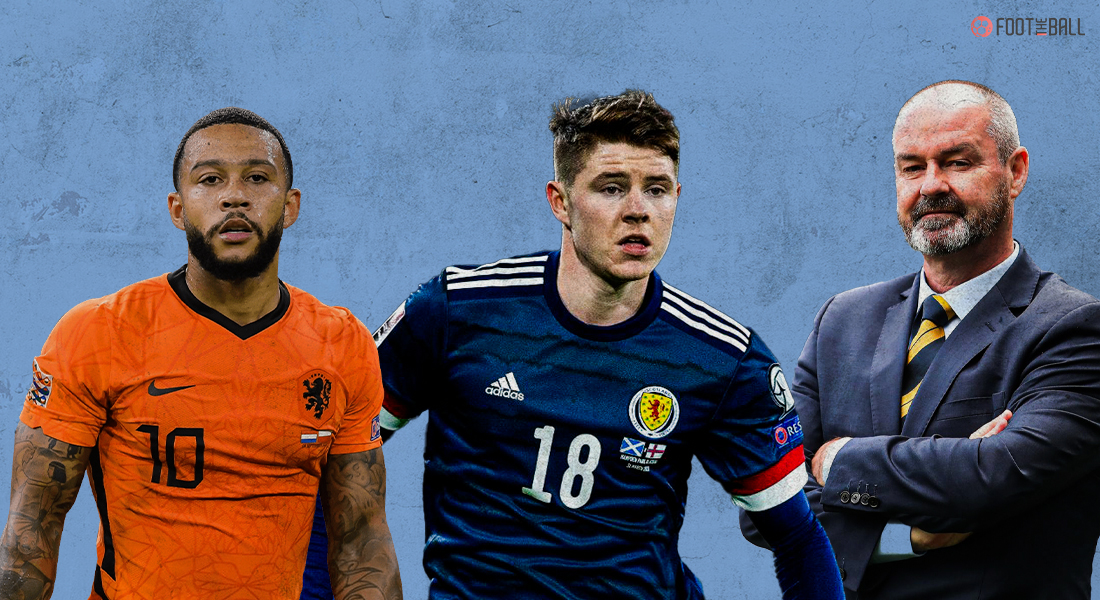 Netherlands met Scotland in this friendly with plenty of star names across the pitch. Both sides looked to establish themselves early on in attack. Dutch right back Dumfries got the first chance after some neat play in the box saw his post fizz against the side netting. Netherlands were having the majority of possession in the midfield. However it was Scotland who took the early lead just at the 10 minute mark.

An attempt to play out of the back broke down near the Dutch penalty area. The ball fell to Hendry who lashed a shot at goal that went past the outstretched Krul in goal. Scotland were certainly buoyed by that as Dykes’ shot moments later drew a sharp save.

Netherlands responded within six minutes. A ball over the top by debutant Timber was nodded into the path of Memphis by Wijnaldum. The Lyon attacker’s first time shot on his left foot found the back of the net for the equaliser. That goal was certainly coming based on their level of control so far.

The game settled down after that as both teams looked for the next goal. Oranje were the quicker of the two but the Tartans knew they had speed with them. There were a few challenges flying around but there was little sign of fatigue on show. That did not stop Frank de Boer from making a double change at the half hour mark. Off went De Jong and Wijnaldum with Klaassen and Gravenberch coming on. With further shots at a premium, the sides finished the half level at 1-1. It had been a tight cagey affair and neither team wanted to concede again.

Memphis Depay's strike cancels out Jack Hendry's opener, as we go in level at the break.#NEDSCO pic.twitter.com/Xhm5ouWdRQ

The first ten minutes of the half saw little action. Possession kept changing feet, with the Dutch looking to get forward more. Their disjointed play proved ineffective for the most part however. Scotland were just happy to keep their presence.

The only action in the first 15 minutes was when Steve Clarke made a trio of substitutions at the hour mark. It took one of them to get the game going. Scotland broke away on the counter with Armstrong running at full steam. He found Robertson whose measured cross to the back post was tucked home by Nisbet for his first international goal.

David Turnbull was the next to try his luck, whose shot just shaved the back of the net. That was followed by another flurry of changes from both sides. Netherlands still dominated the ball and were now looking to attack in a much more urgent manner.

Dutch substitute Van Aanholt’s shot deflected off a Scottish book to almost take it past Gordon. The goalkeeper made a superb last ditch save to keep the Tartans ahead. It was quite clearly all Oranje now.

🇳🇱 Memphis Depay’s past 11 games for club and country:

That fact was underlined in the 89th minute. Having won a soft free kick near the penalty area, Memphis whipped the ball past a flat footed Gordon to make it all square on the night. There was to be no more chances for either side as the match ended 2-2.

Here are the three key takeaways from the match.

Netherlands found the early going tough with Scotland on the attack. However, they soon settled into their passing rhythm in midfield to bring calm. They had a good chance through Dumfries, whose shot went wide, and went behind due to a bit of poor play. Having to play out from the back, Memphis clumsily gave away possession which left Krul with no chance in goal. It could have been 2-0 immediately but for a strong save. Fueled by that, the Dutch equalised after some good linkup play in attack saw star man Memphis atone for his error.

The legendary Marco van Basten scored 24 goals for the Netherlands.

Netherlands tried to forge ahead after the break, but their lack of cohesion in the final third stopped them from posing any real threat. They found themselves trailing just past the hour mark after a quick counter by the Tartans.  That remained the score line till the 89th minute when a sumptuous Memphis free kick levelled things up. That’s how it remained till the end with the Dutch being dominating in attack.

The Tartans will be playing their first major tournament in a generation. Judging by the first half, they still have a lot of work to do. Though they started brightly, their inability to get ahold of the ball in midfield left a lot to be desired. They took the lead on the back of some good pressure applied on the Dutch players at the back and really should have doubled that instantly. However, they saw a clever piece of attack undone their good work. Wijnaldum was not tracked tightly enough as he headed the ball down to an unmarked Memphis for Netherlands to draw level.

In 2018, Kevin Nisbet was playing Scottish League One football for Raith Rovers.

In 2021, Kevin Nisbet is scoring international goals against the Netherlands.

Scotland held firm after the break as well. They weathered a few storms before finding the second goal on the night. Armstrong and Robertson combined down the left with the latter crossing into the box. Nisbet, having just come on, sent an assured finish past Krul to lead 2-1. They failed to hold on to that lead however. Memphis won and converted a free kick near the edge of the box to make the match finish as a draw.

Each team will play another friendly and by the looks of this match, they really need it. Given the short turnaround time after the end of a grueling league season, most players are not functioning at their top levels. No doubt there will be further improvement sooner rather than later but neither of these two sides look like causing any major upsets at the Euros to come.