WHAT NEXT FOR THE CATALANS? 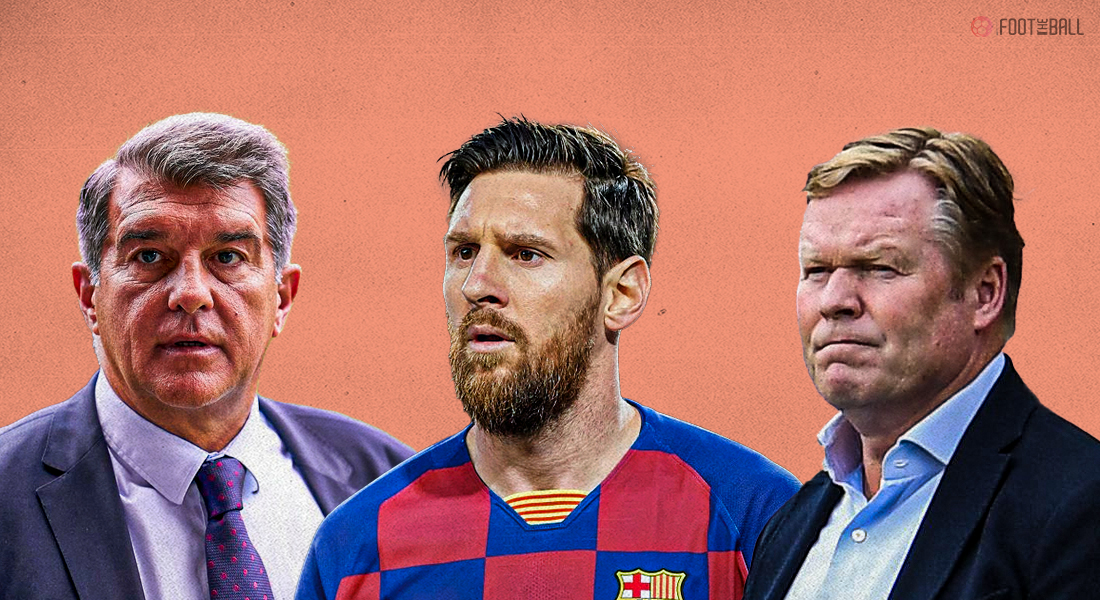 “We have 122 years of history, we have been through everything and we have always come through,” Laporta said Friday, a day after the Catalan club announced it would not be able to keep Messi because of its dire financial situation. “So now we will be more motivated than ever. We want the post-Messi era to be very successful and I think that it will be.”

These were Joan Laporta’s words when asked how Barcelona would cope with Messi’s absence. But will the scenario change at Camp Nou, or will Messi’s departure deteriorate the situation? A circumstance that could have arrived 2 years later, a Messi-less Barcelona could be destined for a downfall that would take time for recovery.

Barcelona have had a bad run in recent years. In the last five years, they haven’t claimed the European crown even once. The moves have been ludicrous, the quantity of dollars spent merely to achieve a steady, ideal 11 is laughable, and the situation of the La Masia youngsters and their chances of making it to the first team are slim. We take a look about the problems Barcelona could face in the post-Messi era and how they could lift themselves from the unwanted situation?

Barcelona might have survived without Leo during the Xavi-Iniesta era because they had this robust approach to the game, honed by the mastermind of Pep Guardiola. They had their groove, and they could generate as much opportunity as they wanted out of thin air. Messi was also a member of it. He was a striker, but he was gradually evolving into a genius at that time.

My best memory of Leo #Messi is…

But since the Spanish midfield duo retired from the sport, the protagonist of Barca’s fairytale has been standing there all alone fighting for silverware. Neymar supported Messi, but PSG’s lucrative contract attracted the Brazilian while Suarez was astoundingly sold to rivals Atletico Madrid.

And last season too, the Argentine was solely creating opportunities for Barcelona. Antoine Griezmann hasn’t settled yet at the Camp Nou, Ousmane Dembele’s Barcelona career has been shrouded by injuries, while Phillip Coutinho hasn’t enjoyed a beautiful Spanish vacation.

And although Pedri and Ansu Fati have supported the Argentine, the flamboyance Messi brings to Camp Nou would be missed by the Blaugranas. In the past 5 seasons, Lionel Messi has outperformed his xG on every occasion. None of the talismanic strikers in the world have been able to beat their xG in the way Messi has.

The Argentine makes approximately 33.6 passes each game, which is more than Busquets(25) and Pedri(26.8). This indicates how Messi attracts the ball and along with its defenders to either create space for his teammates or himself. Lionel Messi successfully dribbles past 65% per cent of his opposition. Another thing that Barcelona would have to fill after the Argentine’s departure.

For the transition period at Camp Nou, Koeman should trust the La Masia youngsters. The Spanish teenagers have an exemplary vision from an early age and love to stamp their authority on the pitch with outrageous passing. Riqui Puig or Pedri, if played together, could replicate the duo of Xavi and Iniesta avoiding a downfall for Barcelona in the post-Messi era.

De Jong played the most minutes for the club last summer and since the Barcelona revamped started, the Dutch midfielder was at the heart of Barcelona’s eleven. He fabricated opportunities for the strikers, controlled the midfield, and sneaked ahead whenever Barcelona needed a goal.

WILL MESSI’S GOAL-SCORING ABILITY BE MISSED?

Now with Messi gone Ronald Koeman could need more than one player to fill Messi’s Absence. Finding a short-term solution won’t be easy, something that happened with Madrid. Since Ronaldo’s departure to Italy, Los Blancos struggled to win silverware constantly being knocked out of Europe. With the number 10 leaving, the current transfer market doesn’t have a single player that Barcelona could buy to fill the void.

One of Memphis Depay or Antoinne Griezmann would have to score 20+ goals a season, something Messi did quite easily. With reports suggesting Aguero might also be leaving because of Messi’s contract termination, Barcelona could lose on the poacher they purchased from Manchester City. Other than Messi’s goal-scoring ability, it was the time the goals were scored that mattered the most.

Lionel Messi could rip apart defences in crucial matches and although Depay had proved in France that he is a world-class prospect, the Spanish defenders belong to a different breed. For instance in the Round-of-16 encounter against PSG, even if Messi had a quiet first-leg he fabricated a galaxy of chances for his striker to pounce on. In the same match, he scored a thundering rocket rattling Keylor Navas’ frame. Or the Copa Del Rey final could exemplify Messi’s contribution to Barcelona in recent times.

But Messi’s departure allows Depay and Griezmann to operate in their favourable positions. The two-goal hunters could combine to thunder some beautiful strikes for Barcelona. And Messi’s departure might add some healthy pressure on the two who are experienced enough to turn the abuse into claps quite easily.

Finally, the Argentine’s departure could hit Barcelona’s revenues in a completely wrong way. The spectators at Camp Nou will surely reduce if the Greatest Of All Time isn’t playing. With fans returning next summer, Laporta would have expected to fill Barca’s financial chests once again. But with Messi not wearing the Blaugrana shirt again, the turnout could easily be reduced

Also, about 2 million jerseys with Messi’s moniker are sold each campaign with prices ranging from 100 dollars to 200 dollars. And considering the amount, the Argentine brings approximately 45 million dollars, something that Barcelona are sure to lose on.

TIME FOR THE VETERANS TO STEP-UP

Although Messi’s departure came as a shock, Barcelona fans would expect the Catalans to recover from this setback quite quickly. But with the Argentine leaving the club, Joan Laporta and company would expect the veterans still donning the Barcelona jersey to be the torch-bearers of the Spanish giants. Barcelona’s roster still has Jori Alba, Gerard Pique, Sergio Busquets, and Sergio Roberto up their sleeves, and the La Masia graduates would have to fill in the hole left by the Argentine.

Although the connection of Alba-Messi won’t be visible on the pitch anymore, you would still expect the Spanish left-back to fabricate opportunities for Barcelona’s current forward battery. And although according to Gerrard Pique’s post ‘Nothing Will Be Same Again’, the experienced centre-back would have to leave behind the departure and help develop the Catalans into a formidable outfit.

After Neymar’s departure or Iniesta’s departure, Barcelona has introduced La Masia graduates like Puig or Pedri but it’s the experienced campaigners of the dressing room that can hold the team together in a situation of misery. It’s important to realise that Barcelona have lost their captain, and Koeman would be looking for a leader in the dressing room. Although many of them could wear the armband, would they be able to lift the Catalans from a situation of misery in the post-Messi era remains to be a crucial question?