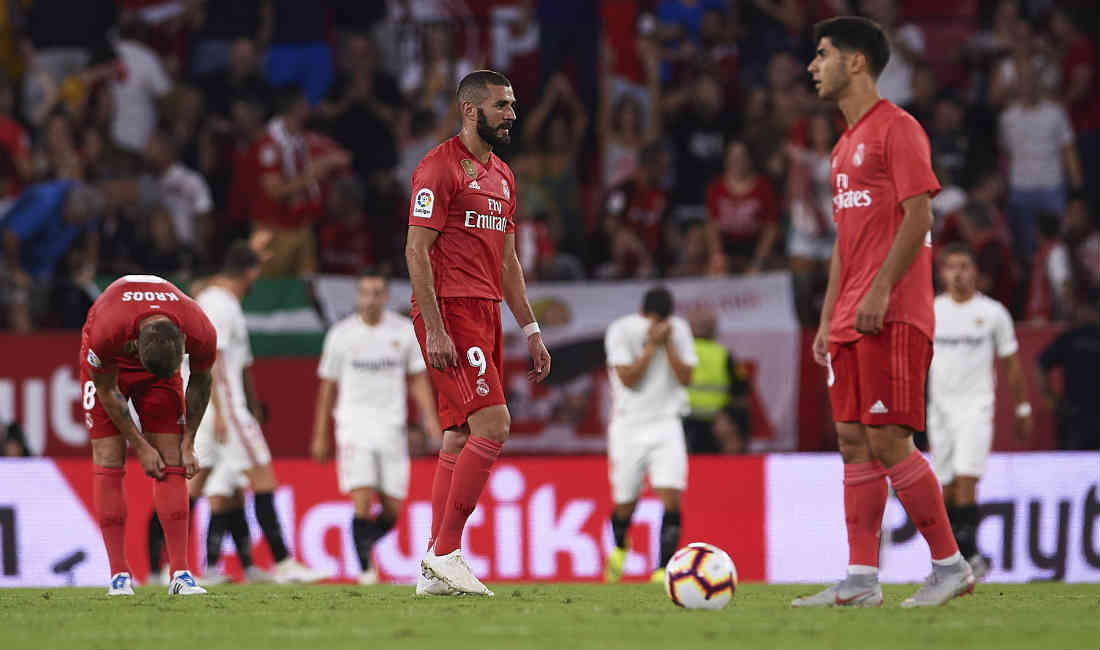 It has been two weeks since Real Madrid kicked off their defense of Champions League title with arguably their best display of the season by beating Roma 3-0.

That win in front of a packed and happy Santiago Bernabeu Stadium seemed to herald good times from coach Julen Lopetegui and his squad.

However, if 90 minutes is a long time in football, a fortnight can appear an eternity.

Two weeks after that win Real Madrid are in a crisis accentuated by their 1-0 defeat to CSKA Moscow on Tuesday night.

Madrid managed 26 shots in the Luzhniki Stadium, they hit the woodwork 4 times but failed to score, which is their worst shots to goal ratio in a Champions League game since the 2003/4 season.

That would be merely bad luck, but Tuesday’s result follows Saturday’s 0-0 draw at home to Atletico Madrid and the previous Wednesday’s 3-0 defeat to Sevilla and it is the first time Real Madrid have failed to hit the target in three consecutive matches since 2007 when Fabio Capello was in charge.

With Ronaldo now at Juventus and Gareth Bale out with a groin strain, Karim Benzema led the line, but without a goal since September 1, the Frenchman looks low on confidence and Lopetegui had to defend the forward saying, “Goals come in runs and just like the rest of the team, he isn’t scoring.”

Perhaps aware that Capello turned things around to win the league title, Lopetegui put the defeat, which came after a first minute error from Tony Kroos, down to missing “A little bit of luck… We tried in every way possible, from one side and the other, from a long way out, from close range, with crosses and with runs…but we didn’t manage it.”

The Madrid coach said he was happy with the work his players do in training and the chances they create, however, he also admitted that key playmaker Luka Modric had not been in top physical condition and had only entered the game because he had been needed.

With Marcelo also missing with a calf injury and Sergio Ramos rested in Madrid because “his hamstring with be grateful,” Tuesday saw further injury problems build up for Lopetegui with right back Dani Carvajal also forced out through injury and the sensation is of a team that looks tired in the first week of October.

“The atmosphere in the dressing room isn’t great, but we have to lift ourselves up,” said Modric after the game and attention will now be turned to Saturday’s league game away to Deportivo Alaves.

Alaves are currently sixth in the Liga Santander and a win last weekend has taken them level on points with Real Madrid. Victory for Lopetegui’s men in Vitoria would lift the pressure on the coach and his side, but with an international break just around the corner and no game afterwards until October 20th, defeat would see the crisis drag on for another fortnight and as we have seen two weeks can be a very long time in football.