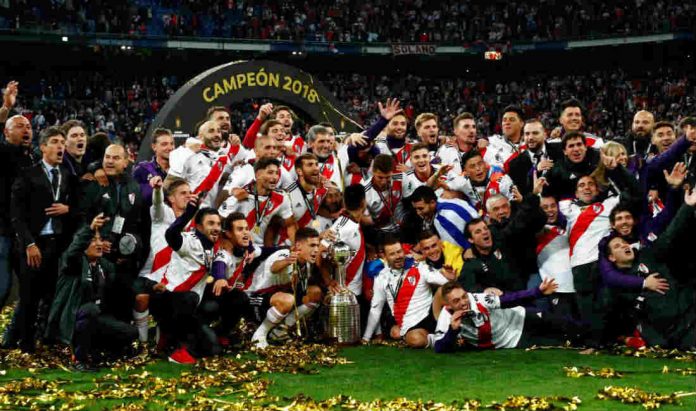 Juan Fernando Quintero and Gonzalo Martinez scored in extra time as River Plate secured their fourth Copa Libertadores title with a dramatic 3-1 victory over River Plate in the second leg of the final here on Sunday.

The result at Real Madrid’s Bernabeu Stadium followed a 2-2 draw in the first match at Boca’s La Bombonera last month.

Originally scheduled for River’s Monumental stadium on Nov. 24, the fixture was postponed and shifted to Madrid after several Boca players were injured in an attack on their team bus.

Dario Benedetto gave Boca the lead just before halftime on Sunday before Lucas Pratto equalized in the 68th minute.

The game was forced into extra time and Boca played most of it with 10 men after Wilmar Barrios was shown a second yellow card for a rash tackle on Exequiel Palacios.

Colombia international playmaker Juan Fernando Quintero gave River the lead with a superb long-range goal in the 109th minute and Gonzalo Martinez put the result beyond doubt by slotting the ball into an empty net in the final seconds.

The result hands River Plate a berth in the FIFA Club World Cup in the United Arab Emirates, which begins on Wednesday.

Quintero, who also provided the final pass for Martinez’s goal, said River had outplayed Boca on the night.

“After halftime we began to move the ball around a lot better and showed that we are deserving champions. It was a fair result,” the 25-year-old told reporters.

Of his goal, the FC Porto loanee said: “[Camilo] Mayada gave me the ball, I looked for space and was then able to put it in the net.”

Sunday’s game took place amid heavy security with around 4,000 police deployed in and around the Bernabeu, more than the number used for a clash between Barcelona and Real Madrid.

However, fears of violence quickly subsided as rival supporters mingled peacefully before the match and sat side-by-side with each other inside the stadium – an unthinkable occurrence in Argentina, where away fans have been banned from attending matches in the top division since 2013.

Boca had requested that the clash is cancelled, arguing that River should have been expelled from the competition following the violent scenes.

But their apparent unwillingness to play was not evident on Sunday and Guillermo Barros Schelotto’s men looked the most eager of the sides in the early minutes.

Pablo Perez had the first chance of the match, firing an acrobatic effort straight at goalkeeper Franco Armani in the 11th minute after Lisandro Magallan headed the ball down from a corner.

Perez frittered away another golden chance just before the half-hour mark when his partially deflected shot flew wide after a Benedetto set piece ricocheted off the River wall.

Boca was finally rewarded for their dominance as they broke the deadlock on the stroke of halftime.

Nahitan Nandez initiated a swift counterattack by bursting out of defence and threading a sublime 30-yard pass into the path of the onrushing Benedetto. The former Tijuana forward skipped past Jonatan Maidana before coolly placing his shot into the bottom left corner of Armani’s goal.

River continued to take the initiative and it was no surprise when the equalizer came in the 68th minute.

Another slick move involving Perez and Fernandez ended with Pratto and the striker made no mistake by rifling a first-time shot past Esteban Andrada.

The long trip from Buenos Aires seemed to take its toll on both teams as they wearily saw out the 90 minutes and forced the game into extra time.

Boca was dealt a hammer blow when Barrios was dismissed just two minutes into the first additional period. River immediately gained the ascendency and Quintero sent their fans into wild celebrations by arrowing a left-footed shot in off the crossbar after being picked out by Mayada.

Quintero then set up Martinez, who rolled the ball into a net that was left unguarded by Andrada’s decision to go forward for a corner.