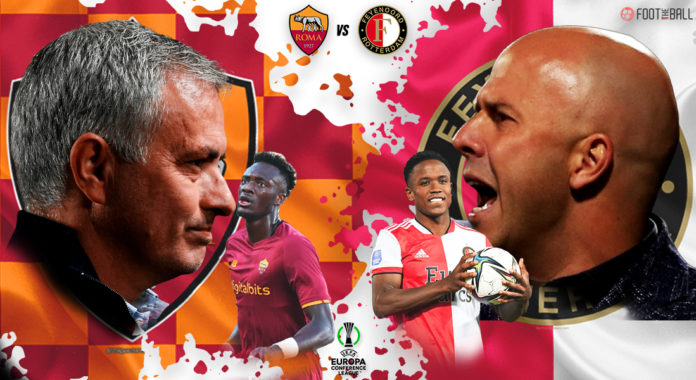 AS Roma vs Feyenoord

With one European final already wrapped up, it is time for the second one. Roma face off against Feyenoord in Tirana, Albania in a bid to be crowned the first winners of the inaugural UEFA Europa Conference League. This final has been a long time coming for both sides.

The Giallorossi have had a whirlwind year. Jose Mourinho’s return saw the form book certainly go through the wringer. They have clinched the Europa League qualification for next season, finishing in sixth place. However, a key problem throughout has been the lack of goals. Roma’s 59 strikes. for the season are the third-lowest amongst the top-12 teams.

It gets even more worrisome when one realizes that Tammy Abraham has scored 17 of them. The defence has been pretty good, given how Mourinho has stuck with mostly the same players.

Roma have a very good chance to win their first European trophy in decades, and they are certainly the favourites in this fixture. Having suffered humiliation early on in the tournament, this could be the perfect redemption point.

Feyenoord have stunned quite a few top teams in the competition to get here. They toppled Marseille in the semis, and having finished third in the Eredivisie, will look to end the season on a high. Feyenoord are a young squad, with several budding stars including Luis Sinisterra, Cole Bassett, Orkun Kokcu, and others.

What a road it has been to the #UECLFinal.

Arne Slot has been around as a player for a long time, and will relish the challenge of facing Mourinho and co. Moreover, Feyenoord have lesser pressure, given their underdogs tag in the final.

They could seal direct entry into the group stages of the Europa League by winning the competition. It has been two decades since their UEFA Cup triumph, and another special evening beckons.

Roma have had issues with Chris Smalling, Henrikh Mkhitaryan, and Nicolo Zaniolo. However, all three of them should be back involved by the final.

Feyenoord will be without promising left-back Tyrell Malacia.

Tammy Abraham has had his career rejuvenated by Mourinho in Rome. Having been discarded by Chelsea, it has been no less than a stunning turnaround. Abraham has racked up 27 goals across all competitions, nine of them coming in the Conference League. Mourino has brought Abraham’s mojo back, with the striker becoming an all-round danger. He is a constant menace, with superb heading ability and brilliant striking.

Tammy Abraham has broken the record for most goals by an Englishmen in a single Serie A season 🏴󠁧󠁢󠁥󠁮󠁧󠁿👏 pic.twitter.com/JYBhrnR3X5

Moreover, Abraham is an expert in working the channels, being able to stretch the defence and drop wide when necessary. Mourinho has beefed up his confidence, with Abraham able to compete for all loose balls. If the midfield and wingbacks can keep supplying him, there is no doubt he will be able to score.

Feyenoord have a few aces up their sleeve, with wide attacker Luis Sinisterra a key threat. He has 18 goals and 11 assists across all competitions, and is a menace for the opposing fullback. Sinisterra is the main attacking outlet due to his ability to skip past defenders. Therefore, Roma have to keep a close watch.

Similarly, the three-man defence will be stretched, meaning Rick Karsdorp has to do his defensive work. However, Sinisterra can be a fearful proposition when he is in full flow. Roma will do well to stop him as high up the field as possible.

Jose Mourinho has never lost a European final. His pedigree will come in extremely handy for Roma. Therefore, Feyenoord have to play fearlessly if they are to come out on top. FootTheBall predicts a 2-0 win for the Italian side.