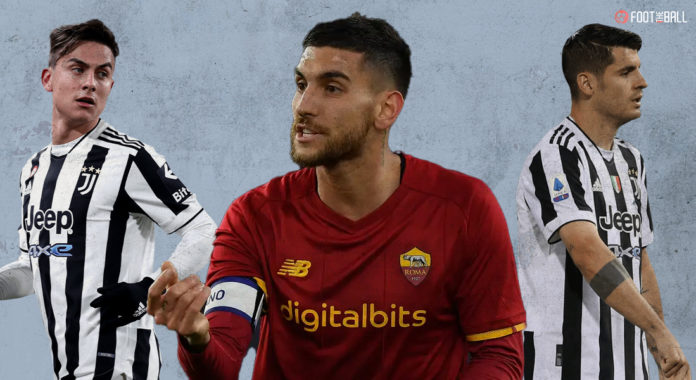 Roma hosted Juventus in their second match of 2022 with both teams searching for the win. The Giallorossi were hammered 3-0 by Milan while the Old Lady picked up a point against Napoli.

The home side started on the front foot, winning a flurry of corners in the opening 10 minutes. Tammy Abraham’s flicked header from one of them was tame and gathered by Wojceich Szczesny in goal. However, from the yet another one, the Englishman made no mistake as he glanced a header in for the opening goal.

All that good work was undone less than 10 minutes later with Federico Chiesa and Paulo Dybala combining. The Italian’s pass into the Argentine at the edge of the box was perfect, with Dybala taking one touch before curling the ball beautifully past the goalkeeper and into the net for the leveler. It was proving to be an even match as the first half progressed well.

However, the Bianconeri suffered a massive blow just past the halfhour mark with Federico Chiesa being forced off through injury. There were a few challenges here and there as the first half was coming to a close, with neither team able to enjoy any sustained possession.

The second half was immediately kinder to Roma, Henrikh Mkhitaryan’s shot taking a huge deflection of Mattia De Sciglio to loop past Szczesny within two minutes for the game’s third goal. The game was devolving into a fiesty contest, filled with fouls and bookings before Lorenzo Pellegrini provided a moment of pure beauty.

The home captain stepped up to a free-kick from 25 yards out and deposited it right into top corner, giving the goalkeeper no chance and doubling Roma’s lead. Juventus looked deflated and it would surely take a Herculean effort to get back into the home, especially with Chiesa not on the pitch. However, they did grab another goal with 20 minutes remaining.

Alvaro Morata brilliant solo play down the right, and cross was headed home by an unmarked Manuel Locatelli from near Rui Patricio to give the visitors hope. They thought they had equalised just a minute later, when Dejan Kulusevski knocked it home after Morata’s shot was blocked. But the offside flag had gone up, though a VAR check overturned the on-field call and Juventus were back.

Incredibly, just five minutes later, the Old Lady were in the lead. A poor header from Chris Smalling near his penalty box allowed De Sciglio to steal through and fire a finish past Patricio at his near post. Incredibly, there was still one more twist left. A cross from the right for Roma found Abraham whose volleyed attempt struck the outstretched arm of Matthias De Ligt. Not only was it a penalty but it meant a second yellow card for the Dutch defender.

However, Pellegrini could not recapture his earlier magic as his penalty was saved by Szczesny who dived to his right. Roma tried their hardest to get back into the match, Carles Perez’s deflected strike being the closest, but it was not to be as Juventus held on for a very famous win.

Here are the three key takeaways from the up and down match:

Two games, seven goals conceded. It is a far cry from the days of Jose Mourinho being heralded as a defensive behemoth at Chelsea. His 3-5-2 has been questioned, having conceded three or more goals for the sixth time tonight in the league. Granted they could have secured a point if Pellegrini had converted the golden chance but they should never have been put in that spot.

Leading 3-1 and comfortably being the better side in attack, Roma panicked after the introduction of Morata and proceeded to collapse. A hugely disappointing result, especially given where they were once.

It has not been the exact return Max Allegri would have hoped for this season, with Juventus struggling in quite a few matches. But tonight, away from home, they really showed up and how. Having looked listless for most of the match and finding themselves two goals down, they turned the game on its head in brilliant fashion.

Juventus were 3-1 down to AS Roma, with just over 20 minutes remaining, then…

What a game and what a turnaround at the Stadio Olympico! pic.twitter.com/CUcRV8i6XN

Morata was central to the renaissance, being involved in two of the three goals. Chiesa’s injury will definitely be a big blow, as would De Ligt’s sending off but the determination they showed in holding fort with 10 men was more than admirable.

It has not been a dream debut campaign for Mourinho with the capital club, suffering humiliating losses in league and Europe. His media outbursts have not helped matters either while his system is being openly questioned now. It remains to be seen whether he can survive till the end of the season but it will not be any surprise if he is sacked earlier than that.