Rotations Begin For Valverde And Barca

FC Barcelona coach Ernesto Valverde will start a policy of squad rotations when his side travels to face recently promoted Getafe CF on Saturday night. 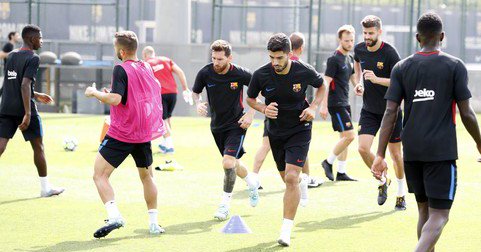 Barcelona have enjoyed a start to the season that few would have predicted in the middle of August following their 5-1 aggregate Supercup defeat to Real Madrid, but Valverde has so far guided his side to three consecutive wins in the Liga Santander, while last Wednesday saw Barca defeat Juventus 3-0 in their opening Champions League game.

However, the fixture calendar gives no respite and after three games in the past week, Barca now face a further six games in the coming fortnight and Valverde will have to start resting key players in order to avoid burnout.

#GetafeBarça
Valverde: ‘Getafe is dangerous on set plays and it’ll be tough’ pic.twitter.com/usfIyA9IP8

Arda Turan and Rafinha are out through injury and Leo Messi, who has been in his usual outstanding form at the start of the campaign, is certain to start, but it remains to be seen whether Valverde will keep record signing Ousmane Dembele in his starting 11 or reserve him for next week’s midweek game at home to Eibar.

If Dembele is rested then Gerard Deulofeu, who has provided enthusiasm and energy whenever he has been given the chance, is likely to return to the side, while Andre Gomes may also have a chance of starting in midfield, as does Denis Suarez, who could step in for Andres Iniesta.

Meanwhile Valverde could also make changes in defense with Sergi Roberto, Aleix Vidal and Lucas Digne all in with a chance if the coach decides to rest Nelson Semedo and Jordi Alba, both of whom have been in good form in recent matches.

Getafe defeated local rivals Leganes last weekend and like other recently promoted sides Girona and Levante look to be tough and difficult to break down. Barca are favorites, but Valverde would be well advised to remember that Luis Enrique made squad rotations last season, that was when his side slipped up and dropped the points that eventually cost them the title.