A WARM-UP FOR THE EUROS 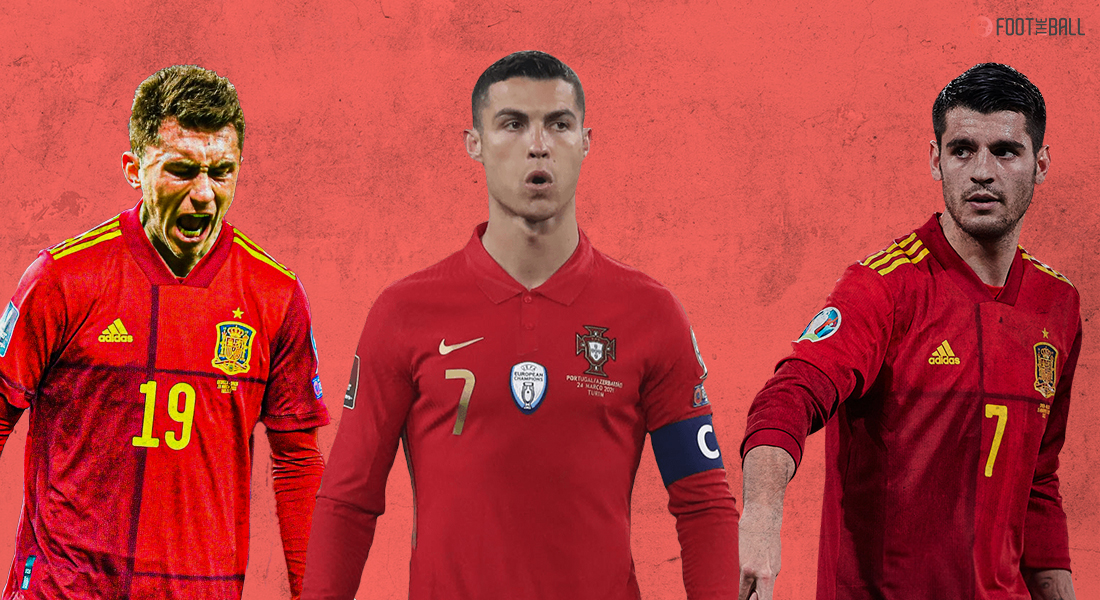 A much-anticipated friendly between defending European Champions Portugal and a somewhat new Spain side ended in a goalless draw. Luis Enrique’s men had the upper hand throughout the game but were unable to find a goal. Portugal has much work ahead of them as the Euro’s approach. If they are intended to emerge out of the group of death, they surely need to up the ante.

The opening twenty minutes of the game proved to be extremely lively with both teams committing to tackles and fighting for a chance to secure the opening goal. The passion and hunger displayed by the teams would have easily made the audience forget it was merely a friendly, meant to warm and experiment the teams before the Euros. An early tackle by Thiago on club teammate Diogo Jota rightly points out the nature of the game.

Although Portugal only had a quarter of the possession in the first twenty minutes, they looked to take the lead as Fonte headed in a beautifully whipped corner by Sanches in the 22nd minute. However, the referee deemed that the defender had fouled Pau Torres as he leapt for the header. Just minutes later, Spain regained the ball through Busquets who released Sarabia on the left-wing. His early cross far into the far side of the post met an incoming Ferran Torres who failed to capitalize, sending his header on the wrong side of his near post.

The first half featured few chances with Spain edging the half both on possession and chances. Semedo had the only shot for Portugal in the opening half beside the disallowed goal by Fonte. Spain failed to make use of the lion share of possession they had, unable to break down a staunch defence put up by Portugal.

Thiago and Busquets bossed the midfield and controlled the game for Spain. However, the lack of attacking precision proved to be decisive. The 33-year-old Rui Patricio was hardly troubled by the Spanish attack. Spain pressed high and won the ball in key areas of the field. They were excellent in moving the ball around to find themselves in advanced positions. But a lack of clinical finishing and ingenuity was the differentiator.

Spain was gifted with a couple of great chances in the opening minutes of the second half. Alvaro Morata got his shot away in the 54th minute but saw it deflect off Fonte and back into his path. This time, Morata missed the target altogether. Four minutes later, a persistent Llorente chased Pepe deep into the Portugal box to win the ball and passed it onto the path of Morata. The forward wasn’t able to sort his feet and the ball instead found its way to Sarabia who shot it over the open goal from close range.

Spain went on to make a total of ten shots throughout the game, twice as much as Portugal. Morata enjoyed the fair share of shots and had several clear opportunities in front of the goal. His final effort in injury time sums up the story of the match. A deflected clearance by Gaya fell kindly for Morata who carried the ball into the box. With ample time and space, the forward let loose, lifting it over the keeper. A neat idea, but the ball hit the crossbar. A golden opportunity that could have won them the match.

Ronaldo remained dormant for much of the game but showed his quality in the 60th minute. He beat Pau Torres in the near side of the post with a quick stepover followed by a nifty cross into the box. Jota’s resulting header would have found the net barring a crucial deflection.
Ronaldo seems to be going through a grey patch as he was uncharacteristically seen losing the ball and failing to finish off situations. Situations that usually one would expect the Serie A top scorer to exploit with ease.

The Juventus forward didn’t look at his scintillating best and was unsure of the few forward runs he made. He had a golden opportunity near the 70-minute mark when Fernandes whipped in a sweet freekick which was headed wide by the usually sure No.7.

The French-born central defender made his debut for the Spanish national team after receiving the green light by FIFA. It is safe to assume that Laporte will be a key figure in the backline for Spain in the upcoming Euro especially with the absence of the Former Spanish captain Sergio Ramos. France’s loss might well prove to be Spain’s gain.

The 27-year-old Manchester City defender enjoyed a good 79 minutes before being subbed off. The quality of the new Spanish national was evident as he helped keep the defending European Champions quiet throughout the evening. Towards the end of the game, the defender seemed to have been struggling with an injury. He was subbed off in the 79th minute.