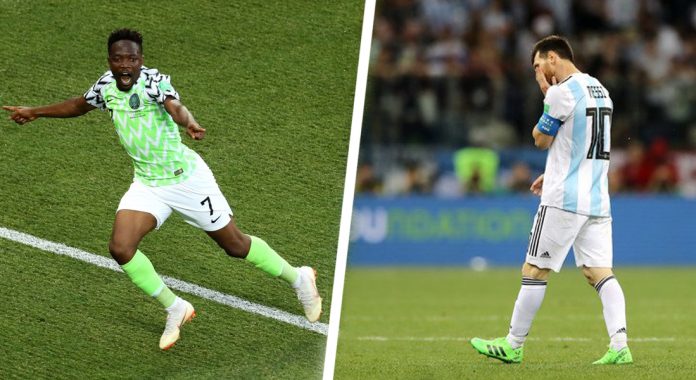 Nigeria defeated Iceland 2-0 in a crunch Group D match. The Super Eagles were in for a fight against the mighty organized Iceland, who showed how to remain disciplined and hold positions against Argentina.

The game being of a huge significance as Messi’s Argentina were wiped off by the now leaders of Group D Croatia. The Vatreni led by the dynamic Luka Modrić humiliated Sampaoli’s men in a bitter way to book their seat in the knockouts of World Cup.

Nigeria’s win has left the second spot of the group wide open now as they moved past Iceland in a convincing fashion. Two absolutely wonderful goals by Ahmed Musa in the second half has given Messi and Argentina some breathing space to fight for the second place.

Iceland again seemed resilient against the waving attacks of Nigerians in the first half and created some chances of their own but the score remained goalless on the stroke of half-time.

Nigeria came out roaring in the second half and made their chances count as in the 49th minute Ahmed Musa through a cross from Victor Moses broke the deadlock by a great finish by firstly getting a perfect first touch and an inch-perfect half-volley in the centre of the net, nothing the Iceland keeper could do this time.

The 75th minute locked the game in favour of the Africans as Ahmed Musa again did what Messi couldn’t, cutting in rapidly from right and rounding of the keeper Musa finished the game by an immaculate display of pace and power.

How does Argentina qualify?

Now that Nigeria has won against Iceland, the spot is blown wide open. So how do the two-time winners qualify?

Argentina now have to defeat Nigeria in their third and final match of Group D and they also need to have a better goal difference than Iceland if the Vikings somehow win against Croatia.

So the third game is all important for all the three teams seeking to get a place in the World Cup knockouts.