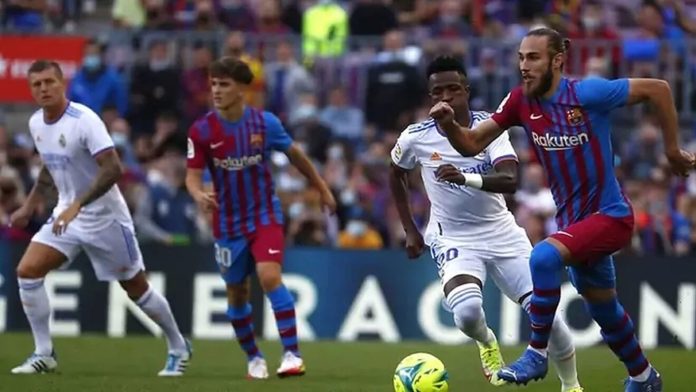 Europe’s fiercest rivalry will see another chapter written as Real Madrid take on Barcelona in the Supercopa semifinal on Wednesday evening in Saudi Arabia. The two sides will be vying for a spot in the final against the winner of the other semi-final between Atletico Madrid and Athletic Bilbao.

Madrid come into the match in good form after a convincing 4-1 win over Valencia in La Liga which maintained their five point lead atop the table while Barcelona drew against Granada and dropped down into sixth place.

The first Clasico of the season was won 2-1 by Madrid back in October with goals from David Alaba and Lucas Vasquez sealing the deal. Madrid are overwhelming favourites given their form and Barcelona’s struggles this season but in a one-off match, anything can happen.

Real Madrid boss Carlo Ancelotti got a boost ahead of the match with Dani Carvajal and Luka Jovic including in the traveling squad. Carvajal missed the win against Villarreal due to a muscle problem but will be looking to make the starting eleven ahead of Vasquez.

🚨| Both Carvajal and Gareth Bale are injured but they have asked the club not to publish their medical reports. While Bale should be ready for the Valencia game, Carvajal won't be risked: he will be back for the Spanish Super Cup. @MarioCortegana [🎖] pic.twitter.com/4Yef2dqTWe

Gareth Bale and Mariano Diaz will be absent due to a hamstring and back problem respectively.

Xavi is not as lucky as his counterpart and several Barcelona players face a late medical assessment to be declared fit for the match. Pedri, Ansu Fati, Ronald Araujo and Frenkie de Jong all have travelled with the squad but remain major doubts.

Eric Garcia picked up an injury over the weekend and is unavailable along with long-term absentees Sergio Roberto and Martin Brathwaite. Gavi is available for selection despite his red card against Granada.

Vinicius Jr is experiencing his major breakthrough season where he has converted the potential shown over the past years into tangible goal output. The young Brazilian has 14 goals and 7 assists to his name with only Karim Benzema having contributed more.

His pace and dribbling skills troubled Barcelona a lot in the Clasico in October and he will be looking to do the same up against his ageing compatriot Dani Alves. Barcelona have a very leaky defence having conceded the joint most in the top half of La Liga and Vinicius will be looking to take advantage of that on Wednesday.

For Barcelona, the key man will be Sergio Busquets who faces the unenvious task of guiding youngsters Nico and Gavi against arguably the best midfield trio of the century in Casemiro, Modric and Kroos. Busquets has maintained his high standards and Barcelona need him to control the midfield if they are to progress to the final.

His ball progression remains one of the best in Europe, ranking in the 99th percentile for passes into the final third per 90 and in the 97th percentile for overall progressive passes per 90 (Data: Statsbomb via fbref). The task will be much harder but Busquets holds the key to Barcelona’s chances.

Madrid have dominated La Liga this season while Barcelona have struggle to put results together. Los Blancos were well on-top in the first Clasico as well and the narrow scoreline flatters the Blaugrana. It is likely to be closer this time with Barcelona having improved under Xavi but FootTheBall predicts Madrid will go through, Real Madrid 3-1 Barcelona.