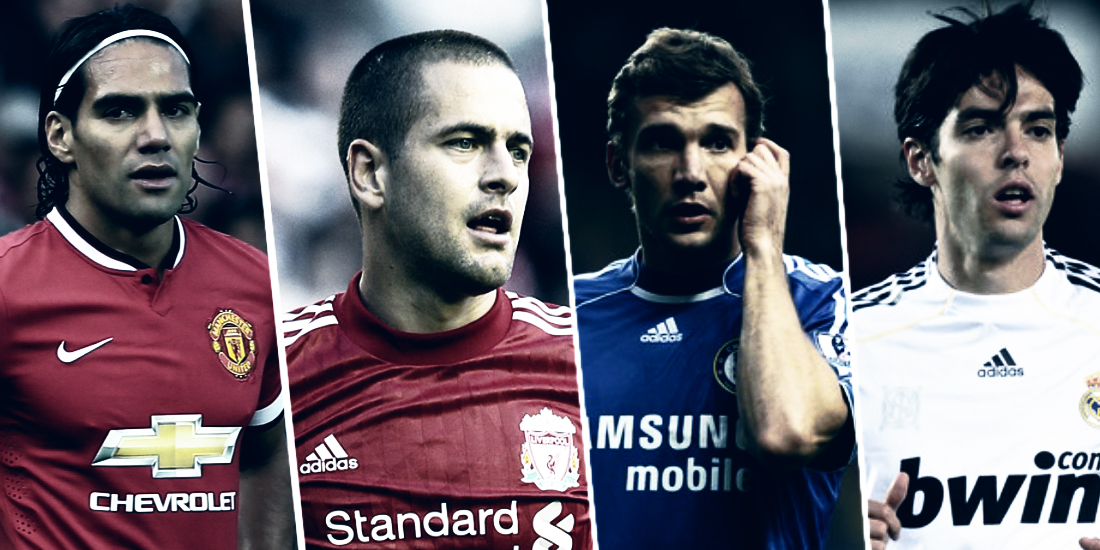 Top 10 Players Who Fell From Grace After Changing Clubs

A footballer’s career is full of uncertainties, here are the Top 10 players who’s bad club choice proved to be fatal for their career.

Alex Song was once one of the most sought after youngster in Europe.

Song was plying his trade with Arsenal and had generated interest from Europe’s best clubs, so it was no surprise when Barcelona came calling for the Cameroon national.

However, things didn’t go as planned, as Song could never cement his place in Barca’s first-team and was loaned out throughout his time in Spain. Now 28, Song is playing for Rubin Kazan in the Russian League.

Rodwell had a dream start to his career, scoring a solo goal, against a star-studded Manchester United. He burst through the midfield and scored a stunner.

At 20, he earned a famous transfer to the then newly transformed Manchester City, but this is when it all went south. The English midfielder couldn’t cement his place in the starting eleven and was sold to Sunderland just two years later.

Now, 25, Rodwell is struggling to get into the Black Cats first-team.

Another Arsenal star who was robbed of reaching his potential after a move to Barcelona is Hleb.

Hleb was an upcoming star at the Emirates Stadium and was making quite a name for himself before the Catalan giants came calling, and Hleb thought it was the best move for his career.

But after spending just 1 season at the club, he was deemed surplus to requirements and shipped off on loan to three different clubs in 3 seasons. Hleb is now playing for BATE Borisov.

Sinclair was a decent English player, and had just cemented his place in Swansea’s first-team.

Soon, Manchester City came calling and it was evident to the world that he will not get much football, but Sinclair and his agent decided it was the best move for his career. 3 years and just 17 appearances later, he moved to Aston Villa.

But, even Villa couldn’t help Sinclair much, as they were relegated to Championship last season.

Michu had a breakthrough season with Swansea, scoring 18 goals in 35 appearances. What made it more impressive was he did it, when Swansea’s were struggling to avoid relegation.

However, Michu failed to capitalize on his impressive feat, as form and fitness betrayed him. A failed loan move to Napoli meant that he was deemed surplus to requirements.

Michu is now paying in the fourth tier of Spanish football for UP Langero after having earned his international debut for Spain just three years ago.

Once, worlds most feared striker Falcao was at the peak of his career when he chose to throw it all away for money.

Falcao was a target for almost every big club in Europe, but he opted to sign for Monaco instead. However, Monaco soon went into financial crisis and Falcao was left hanging in the middle.

A career threatening knee injury halted his career further, even then instead of opting to go to a club that would have given him first-team football, week-in and week-out, he chose to try his luck at Manchester United and Chelsea. In-short, Falcao is himself to be blamed for his woos.

Joe Cole was once the darling of Stamford Bridge faithfuls, having played over 28 games in a title winning campaign, but Cole thought a move to Anfield was the wise move for him.

Things quickly went downhill for him as he lost his place in England’s national team and failed to make an impact for Liverpool.

Cole, however, had a resurgent loan spell at Lille in France’s Ligue 1, but he could not build up on it, and is now playing in the second tier of American football.

Francis Jeffers was termed a ‘wonder-kid’ by English press and a move to Arsenal helped hype the youngster even more.

However, it was said that he wasn’t yet quite ready for first-team action, but Wenger had other plans. 22 games later, Jeffers managed just 4 goals.

He was let go by Arsenal, but the ghosts of his failure in North-London never left him. Eight transfers later, Jeffers ended his career at Accrington Stanley. Wonder, what could have been if he had stayed at Everton a bit longer.

Milan legend Shevchenko was Europe’s most feared striker at the time, and won the 2004 Ballon d’Or.

So it was no surprise when Chelsea came calling for the Ukrainian international, but Shevchenko failed to settle in England.

Drogba’s resurgence also became a stumbling block in his career at Chelsea, and he left just two seasons later.

Kaka, the name was enough to strike fear in rival teams, he was truely one of the greatest midfielders to have graced the pitch.

Kaka was the last player to win the Ballon d’Or before it became a monopoly of Ronaldo and Messi. So, when he signed for Real Madrid, it looked like a match made in heaven.

Kaka was thought to be the long-term replacement for Zinadine Zidane, but he failed to settle at the Bernabeu. He went back to Milan, but it was too late for one of the all time great.