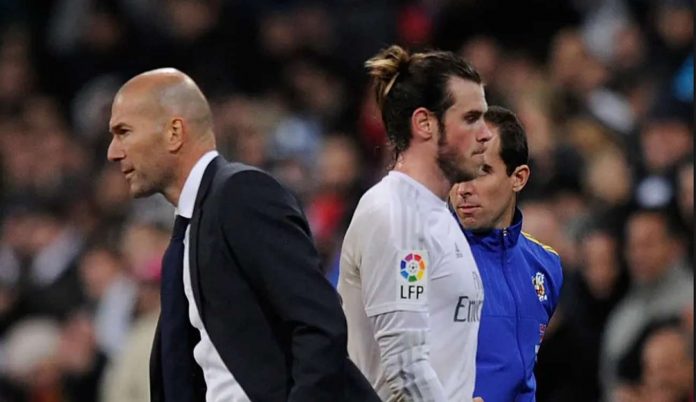 As the pre-season friendly gets underway, Real Madrid were in for a shock loss against Arsenal in Washington D.C. had it not been for the efforts of their under-fire player, Gareth Bale.

Going 2-0 down in halftime, Gareth Bale secured the much needed 2 goals for the Los Blancos.

However, things are still the same in the dressing room when it comes to the relationship between coach Zinedine Zidane and their expensive striker.

Speaking after an impressive performance at FedExPark, Zidane said, “Gareth Bale had a good match and played well. I’m happy for him.

“He is with us. For the moment, he is with us. He played because he wanted to be with us and play, the other day he didn’t. He played and did well. That was my decision and for the future, we will see what will happen. Nothing has changed, you know the situation.”

Zidane rejected question marks over whether a potentially serious knee injury suffered by Marco Asensio during the second half of their comeback could see an opportunity arise for Bale to stay, calling their situations “totally different”.

Over the last week, Bale’s agent Jonathan Barnett called Zidane a “disgrace” after he said that the winger was set to leave imminently in a deal that was “best for everyone.”

Zidane claimed his words were lost in translation – stating that he did not intend to disrespect the forward – but did add that the club were still trying to sell.

Real Madrid are still keen to rope in Paul Pogba from Manchester United and want to use the proceeds from Bale’s transfer to sign in the Frenchman.

Bale’s options have been limited by his age, salary and transfer fee and his camp initially said he had no intention of moving. The Welshman is on €17m (£15.25m) a year after tax and has refused to take a pay cut. Europe’s biggest clubs have been unable to put together a convincing package. Manchester United were not prepared to bid and Bayern Munich could not afford him. There had been suggestions of a return to Spurs but Bale had ruled out a loan move.

China’s Super League clubs can match Bale’s wage demands and there is a determination to continue signing big names – but 100% tax on transfers makes it difficult to put an agreeable offer to Real, who may have to cede. While Real are reluctant to release him cheaply, his wages account for more than €100m between now and the end of his contract in 2022. China’s transfer window closes in nine days.

As the transfer window inches towards the deadline day, it is only a matter of time to see what deal is set for both Real Madrid and Gareth Bale. That the situation will not change if there isn’t any option is an understatement. Bale still has the fire to continue playing, the ball is literally on Zidane’s court!