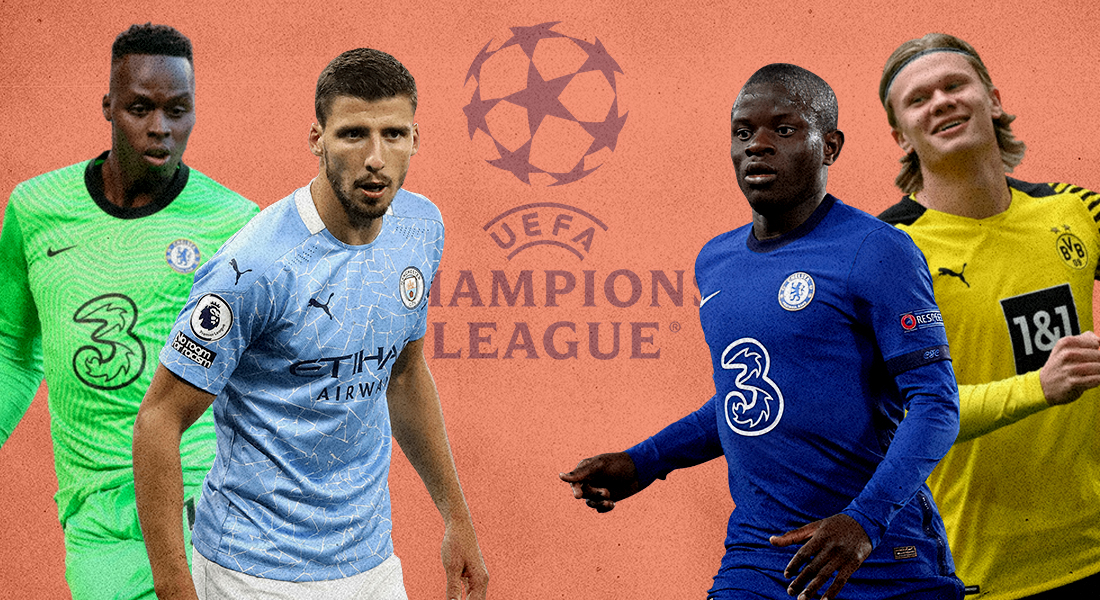 Europe’s biggest competition – The UEFA Champions League, might be well behind us as the fans await for yet another exhilarating edition of Europe’s premier competition.

Chelsea and Manchester City played out an all English final as the men from London tactically outclassed Pep’s team, for the third time in the same season. The Blues might have gone home with the biggest prize there is for any European club out there, although, individual awards are yet up for grabs.

UEFA have revealed the nominees for the awards from last season’s Champions League. Three players have been shortlisted from each position(Goalkeeper, Defender, Midfielder, Forward), with the winners set to be announced on the 26th of August.

So which set of players have made the final cut? Not many would argue with the final set of nominees UEFA has selected, but some of the exclusions might raise a few eyebrows. While the likes of Cristiano Ronaldo and Lionel Messi haven’t been nominated, the competition in place was fierce in itself.

In goal, we have Thibaut Courtois from Real Madrid and the two finalists in Ederson and Edouard Mendy. In defence, it’s again the players from the two finalists who have been selected. Champions League winners Antonio Rudiger and Cesar Azpilicueta have been pit alongside Ruben Dias.

It’s the same in midfield as it was in defence, as N’Golo Kante, Jorginho and Kevin De Bruyne will be competing for the award. When it comes to the forwards that have been nominated, many fans would have been disappointed by looking at names missing such as Messi and Ronaldo. Although, the players that have been nominated ahead of them are equally deserving, with Erling Haaland, Robert Lewandowski and Kylian Mbappe to lock horns for the accolade.

The big Belgian is not someone who is fondly remembered by some of the Chelsea fans. Courtois forced a move out of Stamford Bridge in 2018 to stay close to his family in Spain, and eventually joined Real Madrid for 35m Euros. The 2-time Premier League winner did not have the easiest of starts to life in La Liga and was at the receiving end of fury from Los Blancos fans.

🇧🇪🧱 Three years of the Belgian Wall!
✨#OTD in 2018, we presented @thibautcourtois at the Bernabéu! pic.twitter.com/wDdIDJIATF

Since then, Courtois has been on an upward trajectory, winning the La Liga title the next season and a UCL semi-final where his team were knocked out by his former club and eventual Champions Chelsea.

Pep Guardiola rarely gets it wrong in terms of new player acquisition, and Ederson is no different. The Brazilian shot-stopper was brought in by the Spaniard for 40m Euros and has been worth every penny for the fans in Etihad. He has helped Manchester City win 3 Premier League titles and multiple cup competitions.

But one thing that has still eluded him is the Champions League medal. His team were just a step away from lifting the crown, before they were completely outclassed by a relentless Chelsea side.

When Kepa Arrizabalaga started to cost matches for the Blues, it was clear he was needed to be replaced by a much calm and composed head. And calm and composed is what they got, in Edouard Mendy who was signed for just 22m Euros from Rennes.

In his first season at Stamford Bridge last season, the Senegalese accumulated 16 clean sheets in 31 league appearances. His performances in the Champions League played a huge role in the West London outfit landing their second UCL crown, which highlighted his importance in this team.

Nominees for the position of #Goalkeeper are:

Replacing someone of John Terry’s calibre is never an easy task, let alone doing it seamlessly. Current Chelsea captain did exactly that and led the team from the front in their run to last season UCL final.

Age might not be on his side, but he is still one of the best when it comes to defending in one-on-one situations, and there are few who are better at it than him.

Nominees for the position of #Defender are:

Chelsea’s defence has performed admirably since Tuchel arrived in January and Antonio Rudiger was at the heart of it, thwarting Premier League champions Man City over 90 minutes in the UCL final.

Thiago Silva had limped off with a thigh injury just before half-time and nonetheless to say, the Blues fan base were worried about their defence against the star-studded attack of City. Rudiger led the defence from the front in Silva’s absence and also put in a match winning tackle to deny Foden.

The 24-year-old centre back was also named England’s Footballer of the Year in the annual vote of the Football Writers’ Association last month following a superb debut campaign after his move from Benfica last year.

At this point last summer, Frank Lampard and Chelsea were rumoured to want to cut ties with what would later in the 2020/21 campaign become their most important player, N’Golo Kante.

Little did the Blues know, the little Frenchman, small of stature but big of heart, was about to be their most important figure (again) in what is arguably the most important period of the campaign, the home stretch.

One of the main reasons for Chelsea’s Champions League gold medal was N’Golo Kante. In Kante’s seven starts of 13 Champions League showings, he collected four Man of the Match awards during the knockout stages.

Nominees for the position of #Midfielder are:

Jorginho is a worthy contender for the Ballon d’Or this term ahead of several footballing superstars including Lionel Messi, let alone his individual accolade.

And now a European Super Cup winner, after the Blues’ triumph over Villarreal on penalties – one of which Jorginho scored.

It’s a compelling palmares but as well as the trophies themselves, Jorginho has been front and centre of all these triumphs too, cajoling, passing and leading his teams to victory. It’s easy to forget the headlines that were being written about him just two years ago.

Despite Manchester City finishing 2019/20 18 points behind champions Liverpool, it was a campaign to remember on an individual level for Kevin De Bruyne. The Belgian became only the second player in the competition’s history to record 20 assists in a single season, matching Thierry Henry’s total for Arsenal in 2002/03.

Like Henry 17 years earlier, De Bruyne was one of the best players in England but was unable to lead his team to the title. He was nonetheless consistently outstanding, and played a crucial role in City surpassing 100 Premier League goals in a season for the third time. The following campaign, he was once again key as City won the Premier League title for the third time under Pep Guardiola and also the Champions League final for the first time.

Haaland burst onto the scene in the 2019-2020 season at RB Salzburg, earning a winter move to Borussia Dortmund, where he has reached new heights. Though Haaland’s German Bundesliga brilliance is unsurprising, nobody could have predicted the jaw-dropping stats.

Haaland scored 27 goals in 27 starts for a third-place Schwarzgelben last season, earning major interest from across Europe. Chelsea and Real Madrid have since distinguished themselves as prime options, though the Blues may have taken themselves out of the equation with the Romelu Lukaku move.

Nominees for the position of #Forward are:

2️⃣1️⃣ Thank you for the wonderful birthday messages! 🥳 pic.twitter.com/2BzONF9TgG

European champions – Chelsea were also linked with a move for Lewandowski, who scored a staggering 48 goals in 40 appearances for Bayern Munich last season. Earlier this summer rumours suggested the Poland international was on the hunt for a new challenge after winning every major honour possible in seven years at Bayern.

According to BILD journalist Christian Falk, Lewandowski’s agent Pini Zahavi offered Chelsea the chance to sign his client for around £68million. However, the Blues did not want to pay that much for a 32-year-old in the twilight of his career and instead regarded a £97.5million deal for Lukaku, 28, as a more suitable long-term investment.

Although the Polish International couldn’t get a move outside Germany this summer, he is still very much in contention for this accolade as well as the Ballon d’Or.

Kylian Mbappé is firmly established as one of the best players in the world, and he has already won more trophies than most players do in an entire career. He became Monaco’s youngest ever player and soon after their youngest ever goalscorer during the 2015/16 season, and then led his team to the Ligue 1 title in 2016/17.

A €180m transfer to Paris Saint-Germain followed when Mbappé was still only 18 years of age, and he won three more league titles in his first three years there, as well as a World Cup with France. Few players ever reach these heights: Mbappé isn’t a superstar in the making – he is already right at the very top of the game.

With so many superstars lined up for the all important award ceremony, come the end of the day it would be unfair to these players if any of them miss out on the award. But if anything, these bunch of players have rightfully taken their place among the rest.