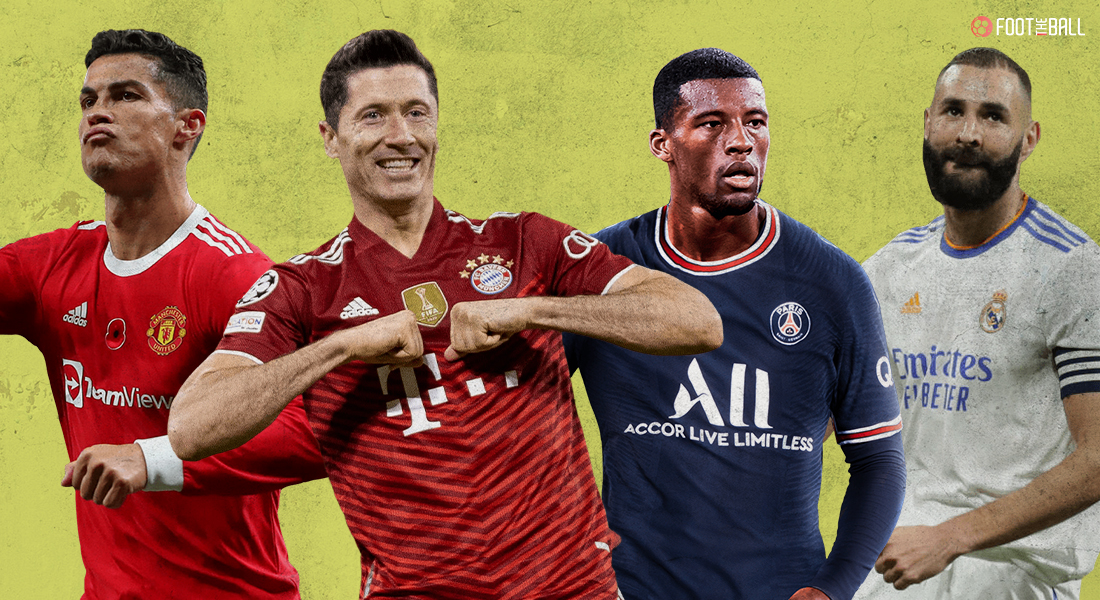 Matchday 4 of the UEFA Champions League was quite eventful with 55 goals which included three own goals, five penalties, and three red cards. Liverpool, Bayern Munich, Ajax and Juventus all booked their place in the Round of 16 with many others putting themselves in a strong position to join them.

Paulo Dybala starred for Juventus as Pep Guardiola’s Man City produced a clinical performance to remind everyone that why they are one of the favourites for the title.

FootTheBall brings you a comprehensive round-up of the fourth matchday of the UEFA Champions League campaign.

Cristiano Ronaldo was again the saviour for Ole Gunnar Solskjær as his brace helped the Red Devils to win a point away to Atalanta.

United who were below par found themselves down by a goal in the 12th minute as Josip Iličić’s tame shot was let in goal by David de Gea. However, Ronaldo levelled just before half-time after some neat play by Bruno Fernandes.

United’s defensive frailties ensured that the Italians had lots of chances to get back their lead and they did just exactly that in the 58th minute when Harry Maguire played Duvan Zapata onside who made no mistake to slot the ball past de Gea.

But just like the previous meeting, it was the 36-year-old who scored a late goal to save his team’s blushes.

The Bavarians confirmed their place in the Round of 16 after thrashing Portuguese outfit Benfica 5-2 at the Allianz Arena. Robert Lewandowski was the star again with a hattrick despite missing a penalty.

It all started in the 26th minute after some brilliant play from Kingsley Coman who set up a header for Lewandowski to open the scoring.

Serge Ganbry made it 2-0 six minutes later before Benfica pulled one back before the end of the first half through Morato.

Bayern would reinstate their two-goal cushion in the 49th minute after some lovely play by Joshua Kimmich and Alphonso Davies which ended with Sane scoring past Odysseas Vlachodimos.

Sane would then provide an assist for Lewandowski’s second before the away side scored their second as Darwin Nunez shot crept under Manuel Neuer’s legs.

However, the German giants score their fifth of the night with Ballon D’ or favourite Lewandowsi keeping his sublime scoring form.

It took just 13 minutes for Jurgen Klopp’s men to break the deadlock after Diogo Jota got on the end of a brilliant Trent Alexander Arnold’s cross to head the ball past Jan Oblak.

Liverpool didn’t rest on their one-goal lead as Sadio Mane doubled the lead after eight minutes.

It went from bad to worse for the visitors as Felipe was shown a red card for a challenge on Mane.

Alex Oxlade Chamberlain, Mohammad Salah and Kostas Tsimiskas also had chances to extend the lead but were kept at bay by Oblak.

Luis Suarez and Diogo Jota both put the ball into the back of the net in the opening 15 minutes of the second half which were chalked off after a VAR review.

After that Liverpool were happy to keep the ball in their possession as they close put the game and qualified as group toppers.

JUVENTUS QUALIFY FOR ROUND OF 16, CHELSEA ON THE BRINK

The Italian side put behind them their domestic struggle as they booked their place in the next round after defeating the Russian side Zenit 4-2 in Turin.

Paulo Dybala was the star who scored a brace and was supported by Federico Chiesa and Alvaro Morata who added a goal apiece.

The away side had the first chance but Dejan Lovren could only put his header above the bar from close range. Juventus who are currently ninth in the Serie A would put their rivals under pressure which ultimately paid off as Dybala volleyed the first goal.

However, the Russians got one back in the luckiest of fashion after an attempted cross took a deflection from Leonardo Bonucci’s head on its way to goal.

Juventus would continue the pressure on and it paid off as Chiesa won a penalty.

Dybala would miss on his first try but an impeachment in the goal area ensured he got a retake which he dispatched in the bottom right corner.

Chiesa would cap off his night with a superb goal before Morata made it 4-0.

Sardar Azmoun would pull one back for Zenit but it was only a consolation as Juventus finally had something to cheer about.

Meanwhile, Chelsea registered a 1-0 win over Malmo in the other match of the group.

Hakim Ziyech scored the only goal for the visitors as the defending champions have one foot in the Round of 16.

German side Wolfsburg defeated Austrian side and group leader RB Salzburg 2-1 to go level on points with Lille. This was the German side’s first win in this year’s competition.

The home side opened the scoring in the third minute with Ridle Baku scoring after being left unmarked at the far post.

The away side were however not going down without a fight as they levelled in the 30th minute after Maximilian Woeber scored a brilliant free-kick.

After that, the Austrian side started to tighten the screws as they looked like the more dominating side.

Wolves get their first win of this year #UCL campaign with a 2-1 victory over @RedBullSalzburg! #VfLWolfsburg 🟢⚪️ pic.twitter.com/I93Mg6N6Yq

Karim Adeyemi squandered an easy scoring chance before Wolfsburg scored against the run of play in the 60th minute.

Maxmillian Arnold whipped a brilliant cross into the box which was put in the back of the goal by Lukas Nmecha.

French champions Lille also strengthened their cause for a qualifying spot after they defeated Sevilla in their own backyard.

Lucas Ocampos opened the scoring for the Spanish side in the 15th minute before Jonathan David equalised via a penalty.

However, Nanitamo Ikone scored the second of the night as Lille are now on five points on level with Wolfsburg and two behind leaders RB Salzburg.

RB Leipzig wastefulness came to bite them back as they drew 2-2 with Paris Saint Germain at home.

Georgino Winjaldum might be unhappy with the number of minutes he is getting at Parc de Princes but he grabbed the opportunity offered to him against Leipzig with both hands as he scored a brace in the first half to put his team into the lead.

The Dutchman came to the French side’s rescue after they had fallen behind in the eight minute with Christopher Nkunku scoring for the Germans.

However, before that two goals by PSG, the home side had several chances to extend their lead but their sloppiness ensured a way back for the Parisians.

PSG kept their lead intact until the stoppage time when RB Leipzig won a penalty after a VAR review which was duly converted by Dominik Szoboszlai.

Real Madrid strengthened their position at the top of their group after beating Shakhtar Donetsk 2-1 at the Santiago Bernabeu.

French striker Karim Benzema opened the scoring for the Spanish giants with a goal in the 14th minute.With this strike Real became the first team in history to score 1000 goals in European cup history.

The visitors were however not to be held back and levelled the score after a neat move which ended with Fernando putting the ball into the net past a hapless Thibaut Courtois.

Benzema would restore Madrid’s lead in the 61st minute and a brilliant save from Courtois in stoppage time ensured that Los Blancos took all three points home.

AC Milan finally opened their account in this year’s Champions League as they drew 1-1 away to Porto.

The Portuguese outfit struck first with Luis Diaz in the sixth minute as the Itaklins massively underperformed in the first half.

They would eventually equalise after a  Chancel Mangulu Mbemba own goal made the score 1-1.

Despite the draw, Milan are four points behind second-placed Sporting and will need a monumental performance to qualify for the next round.

The English champions produced an exhilarating display as they thrashed Belgian side Club Brugge 4-1 at the Emirates stadium.

Foden opened the scoring for the Blues in the 15th minute after some good play by Riyad Mahrez and Joao Cancelo.

However the visitors would equalise almost immediately as Charles De Ketelaere’s cross was turned into his own net by John Stones.

City upped the ante in the second half and got their results as an unmarked Mahrez headed the ball into the goal from a Cancelo cross.

After that the Blues were unstoppable with Raheem Sterling and Gabriel Jesus adding two more goals to put City one step closer to qualification.

Pedro Goncalves scored a brace while Paulinho and Paulo Sarabia added one goal a piece as Sporting ran riot against Turkish side Besiktas.

The Portuguese side raced to a three goal lead in the first half with Goncalves opening the scoring from a penalty before adding his second seven minutes later.

Paulinho would score the third before Sarabid added the only goals in the second half.

To make matters worse Besiktas midfielder Josef de Souza was sent off in the 90th minute,

With this win, Sporting are now level on points with Borussia Dortmund who succumbed to a -1 loss at home to Ajax.

The German side had Matt Hummels sent off in the 27th minute, a decision wish seemed harsh.

Nonetheless, the German side took the lead in the 37th minute after Marco Reus converted from the spot.

The German side managed to hold their Dutch counterparts till the 72nd minute when Dusan Tadic levelled things up.

11 minutes later they would take the lead through Sebastian Haller and finally, the result was put beyond doubt in injury time as Davy Klassen added Ajax’s third of the night.

Barcelona completed the double over Dynamo Kyiv as they won 1-0 away with Anus Fati scoring the only goal of the match.

Oscar Mingueza cross from the right fell to the 19-year-old who unleashed a ferocious volley past the Dynamo goalkeeper.

A win over Benfica on November 23 at Camp Nou will clinch our spot in the last 16 pic.twitter.com/CcKSYlpf3R

However, Dynamo had several chances to score which they ultimately failed to take advantage of.

Meanwhile, Villareal scripted a 2-0 win over Swiss side Young Boys to take a step closer to Round of 16 qualification.

Etienne Capoue opened the scoring in the 36th minute when he scored after his initial shot was saved by the goalkeeper.

The Yellows get an important win in the @ChampionsLeague thanks to goals from Capoue and @Danjuma, and now have 7️⃣ points in Group F 👏. pic.twitter.com/HpZKFCoruW

Young Boys equalised in the 55th minute but Christian Fassnacht’s goal was ruled out by VAR.

And in the 89th minute, the Spanish side doubled their lead Danjuma sealed the match’s fate.

Italian side Inter Milan took the second spot in Group D after completing the double over Moldovian side FC Sheriff. Marcelo Brozovic, Milan Skriniar and Alexis Sanchez scored for the visitors while the home side could only muster one goal through Adama Traore.