Ajax’s Sebastien Haller scored a sensational poker of goals as his side thrashed Sporting 5-1 on Wednesday night. The Ivorian international has scored his first career hat trick in the process as well. Haller is in elite company now with Marco van Basten for being the only Champions League debutants to score four goals.

Though it was a delightful evening for Ajax, Sporting didn’t enjoy one bit of it. The Portuguese Liga NOS champions were humbled at home, ending their 16 games unbeaten run in all competitions. Besides, this fixture marked Sporting’s return to the competition since the 2017/2018 season.

But everything that evening belonged to one man. Haller, who was making his Champions League debut was the right man at the right place for most of the evening. Just two minutes into the game, he scored the first goal of his Champions League career. Haller scored another three goals in an hour to complete his poker.

Haller has enjoyed a debut that few could only dream of. For the towering striker, the route to the top was not an easy one. Just a year ago, his career was in limbo at West Ham. A move was sought to Ajax to resuscitate it. It looks like Haller has finally found his home at Johann Cryuff Arena. The 27-year-old can now perform without pressure and raise to the very top of the game again.

NOT YOUR AVERAGE STRIKER

Sebastien Haller was born in France to a French father and an Ivorian mother. Growing up in France, he developed a love for the beautiful game. Haller had a lean and tall frame and was always playing as a forward. He joined the French club Auxerre as a teenager and progressed through their youth ranks. His performance was quickly rewarded with a move to the Netherlands with Utrecht.

Haller sharped his finishing teeth at Utrecht but it was at Frankfurt that he truly exploded. The striker moved to Germany in 2017 on a four-year deal. He inherited the number nine shirt and was their first choice striker from the beginning. 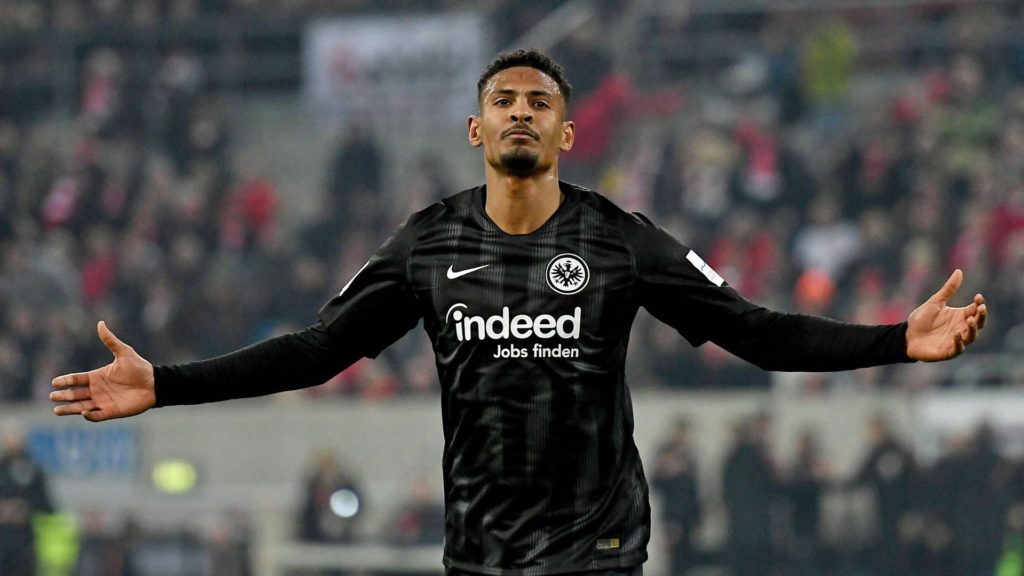 Haller showed in the Bundesliga that he was a two-footed striker. He was strong in the air and often dominated his markers. He liked to make runs off the shoulder of the last man. Since he wasn’t the fastest of the strikers, he had to use his intelligence to beat defenders and be absolutely clinical with the chances he got. Besides, he always has an eye for wonder goals and scored many bicycle kicks in his career.

Haller scored nine goals and assisted a further four goals in his first season in the German league. However, he played a more remarkable role in the DFB Pokal Cup by scoring four times and assisting three times. His contributions helped them lift the trophy beating Bayern Munich in the final. They also qualified to the Europa League through the league.

Haller scored a sensational 15 goals in the league in the following season and five times in the Europa League. His goal contributions in the league were only next to Robert Lewandowski. Such incredible numbers earned him a £45 million move to Premier League with West Ham United.

A TOUGH COUPLE OF YEARS

Haller became the most expensive signing in the history of Hammers. He was expected them to propel forward as they assembled a well-rounded squad. He faced the biggest challenge of adjusting to the Premier League. The English top-flight is notoriously known for unsettling its newcomers. Very few could hit the ground running coming into the league. Usually, players face problems adjusting to the pace and intensity of the game.

Haller eventually became a victim of it as he wasn’t able to get to speed immediately. Despite scoring a brace in his third game, he failed to kick on. It is worth noting that he also scored a bicycle kick in that brace. Haller had a few hit and miss games shortly and was anonymous at times. He failed to be that focal point of attack that the Hammers hoped he would be. Then again he was only a season into his spell at the London Stadium.

David Moyes replaced Manuel Pellegrini at the London Stadium midway through the campaign. Moyes wasn’t a fan of Haller and made Michail Antonio his primary striker. Haller found opportunities tough to come by. He scored another sensational overhead kick against Crystal Palace in December 2020. It was voted as the Premier League Goal of the Month and ironically it was Haller’s last goal for the Hammers. He made a move to Ajax in the winter transfer window with West Ham taking a loss of about £20 million.

It could be said that Haller was judged too quickly by the Hammers without giving him many opportunities. Few segments of the Hammers faithful believe that this would come back to haunt them as they knew Haller would fulfil his potential soon.

A MISTAKE AND A HISTORIC NIGHT

Haller returned to the Netherlands again but this time with the Champions Ajax. Haller found his feet firmly in the Dutch league as he got constant opportunities. However, a grave mistake by Ajax terribly disappointed him. The Amsterdam club forgot to tick the box on Haller’s name and failed to include him in the squad for the UEFA Europa League knockout fixtures.

Haller was quick to put it behind him and scored 11 goals in 19 games as Ajax won the title again. In that period, he switched his nationality to Ivory Coast and made his senior international debut for the African nation. After a full pre-season, he was raring to go in the new campaign.

Ajax made a thumping start to the league and Haller was at the thick of it as he scored four times and assisted once. This time, Ajax made sure that there were no mistakes and included Haller in the Champions League squad. He had to wait for his European debut and when he got the chance, boy did he make it count.

They travelled to Portugal to meet the reigning champions Sporting. Haller started as the lone striker in a 4-2-3-1 system and had a fast start. Brazilian winger Antony made a surging run into the box and hit the crossbar and Haller was on hand to nod it into the net in the second minute. Five minutes later, he tapped home Antony’s cutback past a stranded goalkeeper. He became the fastest player to score a brace on his Champions League debut. He wasn’t done there.

Antony assisted Haller again as the Ivorian finished his hattrick which was a first in his career. It was also the first hattrick scored by an Ajax player in the UCL after Jari Litmanen. Haller once again made history as he finished Noussair Mazraoui’s cross. He matched Marco van Basten’s feat of poker on a CL debut made for Milan 29 years ago. He also became the first African to score four goals in a Champions League match.

After struggling at West Ham, Haller found his feet at Ajax with a sensational poker in the Champions League. He can have a stellar season now and can be a top striker.