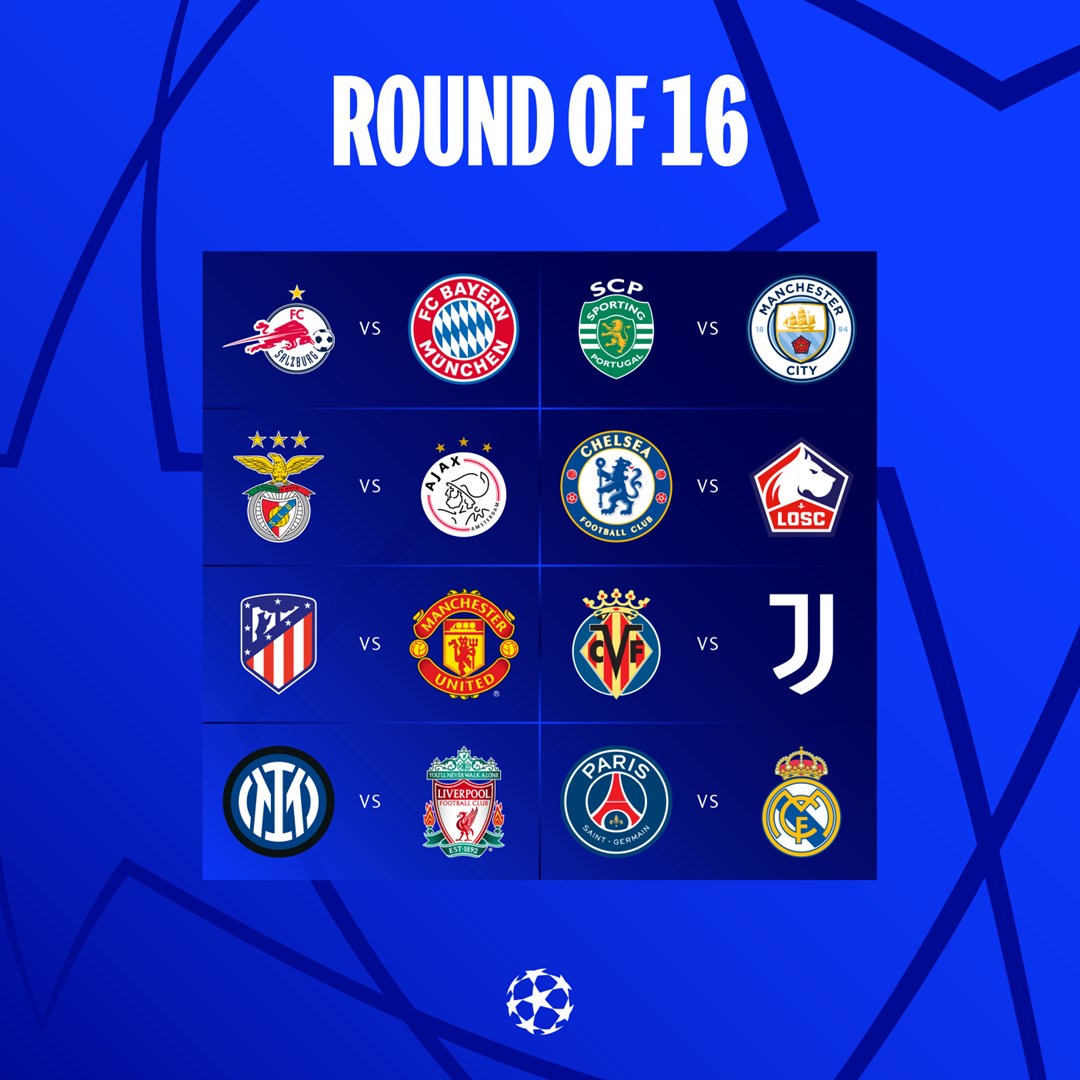 After much controversy and the draw being done twice, this year’s Champions League has finally served up the Round-of-16 ties. As always, there are some which look absolutely stunning on paper and some have left the fans a bit underwhelmed.

Who’s on the upset watch? Is the path clear for Bayern? What about the marquee tie of Real Madrid v PSG? Check out our predictions for every Round-of-16 tie here!

Also read Six-time European Champions! How Liverpool won the competition over the years

On paper, this draw probably looks like the one that has the foregone conclusion. Salzburg did well to get out of their group but Bayern Munich under Nagelsmann has become a relentless machine.

The Bavarians possess more quality in their squad, as well as their system and freak performance aside, should be the overwhelming favourites to get past the side from Austria.

Read more – Real Madrid are European Kings for a reason

Manchester City would be happy with the draw as among all the teams that they could have drawn, the Portuguese champions pose a lesser threat comparatively, at least on paper.

Manager Ruben Amorim has his side playing some absolutely beautiful football but Guardiola’s City have been in stunning form this season. Although it is guaranteed to be a high-scoring game, it would be a major upset if Manchester City do not overcome Sporting.

This is a draw that both teams would be delighted with. Among the more richer and accomplished sides in the draw, both Benfica and Ajax have managed to snag each other. This is a close one to call as both Benfica and Ajax look similar on paper when compared man-for-man. However, Ajax’s recent pedigree in the tournament makes them slight favourites.

Benfica have to contend with a close title race on the domestic front as well which could make things tricky for them. Look for Erik Ten Hag to engineer another dream run for Ajax from the dugout.

Despite finishing second in their group, defending champions Chelsea had luck on their side. They managed to draw current French champions Lille in both the first draw and redraw. This Lille team is not the same as the one that won the title. On the other hand, Chelsea have only got stronger since their UCL title last season. The Blues should breeze through this tie. Anything less would be a disappointment.

This tie promises to be one of the marquee ties of the UCL round. Both teams can claim to be happy with the redraw. Atletico avoided Bayern Munich while Manchester United avoided star-studded PSG in the redraw.

This could be a finely poised match with neither team showing the quality so far that brought them here. However, while United would hope their new coach Ralf Rangnick would have made some progress by then, Atletico have looked a shell of their former selves this season. Manchester United could sneak through this round.

Mark this one for an upset alert. Villarreal under Unai Emery have become somewhat of a knockout specialist team. Combine that with the uncertainty surrounding Juventus’ performance these days, the team from Spain could be looking at this tie as a chance to cause a giant-killing. Juventus would need to be at their absolute best. If they are, then the gap in quality of the squad should see them through. However, it won’t be straightforward.

This tie is a treat for nostalgic fans. Two powerhouses of European football back at the top after spending years in the wilderness.

Liverpool would start as favourites in this one as they have gone from strength to strength this season while the squad that won Inter the Serie A title last year has been decimated due to financial worries. Still, Simone Inzaghi has kept Inter very competitive and exciting. The scrapping of away goals rule could give Inter an advantage as they wouldn’t need to expose themselves at Anfield. However, Jurgen Klopp’s well-oiled machine should still prove too much to handle for the Italians.

The glamour tie of this round. Messi and Sergio Ramos vs Real Madrid. A rivalry unthinkable before this season will take place courtesy of UEFA’s redraw. Real Madrid will be peeved with the draw as they got Benfica first time out. Even for PSG, this is a trickier tie than their first draw opponents, Manchester United.

There are sub-plots in the plenty here, be it Messi, Sergio Ramos or Mbappe playing against his (future?) team. Going out at this stage would be a calamity for both clubs. On the balance of things, while PSG look stronger, Real Madrid look like a better team. Real Madrid could send PSG home early, prompting the Parisien board to ring the changes at the club, once again.

The round-of-16 promises to be full of drama and excitement, regardless of the tie being played. If you want to get in on the action you can check out more predictions and odds on a sports betting app like Oddstrader. The fans are eagerly anticipating the return of Europe’s premier cup competition and the stakes are as high as ever.