Scraping through to the final 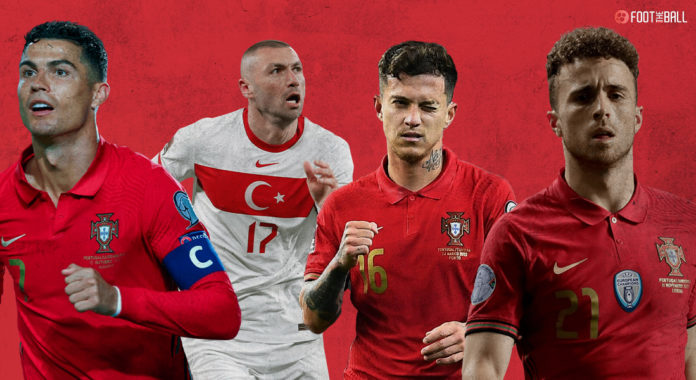 Turkey missed a golden chance to knock Portugal out of World Cup qualification as they lost 3-1 in Porto on Thursday night. Otavio, Diogo Jota and Matheus Nunes scored for the home side while Yilmaz scored for Turkey.

Portugal started the match with a good energy, dominating the midfield from the first whistle. They threatened in the opening few minutes but the Turkish defence was alert enough. Diogo Dalot looked particularly bright in the opening exchanges with Portugal building most of their moves down the right side.

They soon had their first big chance that fell to Cristiano Ronaldo. Diogo Jota was played in down the right and his cutback found his captain in acres of space. Ronaldo’s attempt though was wild and uncontrolled, ending up in row z. Couple of minutes later it was Jota who blazed over, unable to control his attempt on the stretch from Bruno Fernandes’ free kick delivery.

Portugal did not have to wait much longer for the opening goal and it was an unfamiliar face who got it. A failed attack saw the ball break to Bernardo Silva kindly on the left hand side of the box. The Man City man’s attempt was only tipped onto the post by the Turkish goalkeeper and Porto midfielder Otavio was on hand to tap in the rebound.

With nerves settled, the game cooled off a little while before Turkey decided to take the initiative. They nearly equalised with midway through the first half through Berkan Kutlu. The midfielder was found at the far post by Cengiz Under but his header was just wide of the goal.

Orkun Kokcu tried his luck from distance soon after, forcing a decent save from Diogo Costa in the Portugal goal. The momentum was with Turkey but as the half drew to a close, it was Portugal who doubled their lead. The visitors once again failing to retain their concentration after dealing with the first attack.

Otavio this time turned provider, clipping a brilliantly measured cross for Diogo Jota to head in and give Portugal some breathing space. Santos’ men thus headed into the break with a comfortable two-goal cushion and Turkey had it all to do in the second 45.

The second half also started with Portugal in the ascendancy. Bernardo Silva, looking in good form, had another shot well saved by Cakir in the opening five minutes after the restart. Jota has a chance for his second soon after but Ronaldo got in his way, allowing Kabak to slide in.

The game drifted towards a timid conclusion until Burak Yilmaz changed the tone in the 65th minute. It was a delightful goal from the captain, who finished cleverly after exchanging passes with Under. That turned the tide and Turkey suddenly started looking dangerous.

Yilmaz had a penalty shout after a clumsy tackle from Danilo but the contact was deemed insufficient. Calhanoglu had a sighter from distance dragged wide. This did leave chances for Portugal to exploit the space and they nearly had a third after some excellent work by Raphael Guerreiro. The left-back chased down an overhit cross from the other wing, keeping it in before crossing brilliantly. His delivery was met by a late run from Otavio but the header went agonisingly wide.

He was made to rue that miss when Turkey were awarded a penalty in the 83rd minute. Substitute Enes Unal hooked a ball past Jose Fonte and went down. A VAR check ensued and although it was unclear whether it was Fonte catching him or the ball bouncing off his arm, the referee nonetheless pointed to the spot. National hero Yilmaz stepped up to take it but shockingly fired over, a golden opportunity missed.

That seemed to deflate Turkey as their legs gave way to Portugal’s young substitutes. Felix created a good chance for Ronaldo but the finish just wouldn’t come. Sporting’s Matheus Nunes did find the finish after a break by Raphael Leao in injury time. The game ended 3-1 but the scoreline flattered Portugal a bit.

It was a bit of a conundrum for Fernando Santos coming into the match, especially in defence, given the number of absentees. Ruben Dias was injured, Joao Cancelo and Renato Sanches suspended. It tested the depth of the squad and there were plenty of positives to take.

Otavio was a revelation, Dalot looked dangerous down the right, and Costa had a solid game in goal. The substitutions also did the trick in killing off the game. Portugal showed that they have a wealth of talent to use and Santos may just find the correct formula again.

Turkey were billed to be the dark horses at Euro 2020 last summer but were deeply disappointing, losing three out of three matches. This was a big chance for something to be redeemed with a World Cup qualification but they were underwhelming again.

With a generation of Yilmaz, Calhanoglu, Soyuncu, Demiral leading the likes of Under, Kabak and Celik, this was expected to be a much better time for Turkey than it turned out to be.

This was just Otavio’s fourth appearance for the Portuguese national side but he was the belle of the ball on the night. The Porto man scored one and assisted one, and probably should have had another in the second half.

He had an exceptional all-round performance with discipline in pressing and defence and energy in midfield and attack. Maybe it is time for the younger players to take over from Ronaldo for the national team.