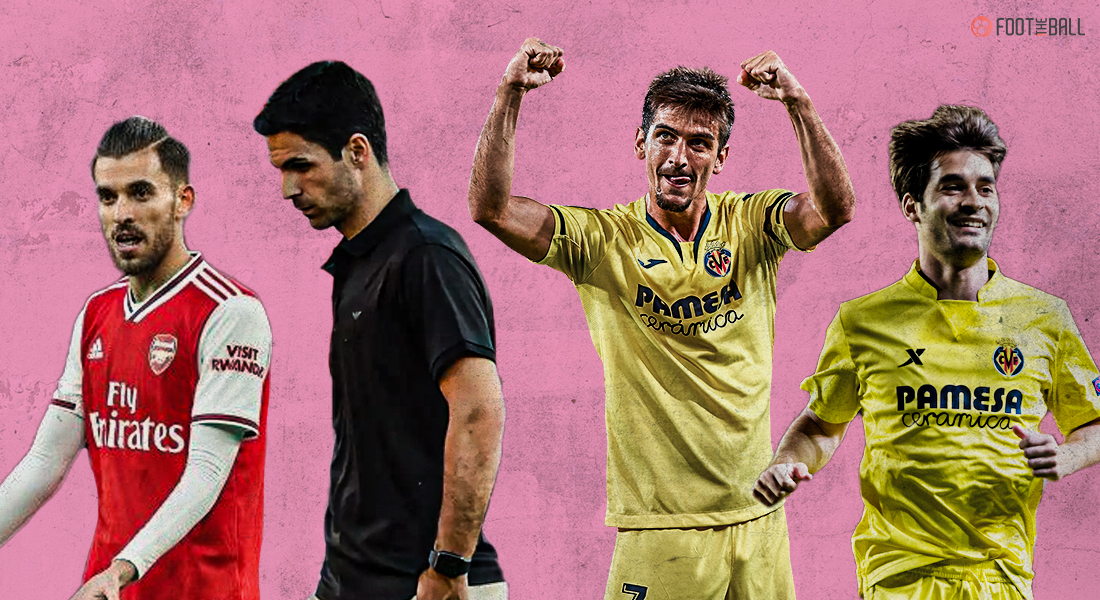 The first leg of the UEFA Europa League between Villarreal and Arsenal ended with a victory for the Yellow Submarine. An eventful match that witnessed two sending off’s and two penalty decisions, of which one was overturned. The game ended Villarreal 2-1 Arsenal.

The Yellows will go to London next Thursday with a 2-1 lead, thanks to goals from @Trigueros17 and @R_Albiol. pic.twitter.com/YMlaRsC0we

There are plenty of positives to take home for Unai Emery’s men as they take the lead going into the second leg. Mikel Arteta’s men, on the other hand, will need to produce a better display at the Emirates Stadium if they have any ambition of going through to the finals. There’s a reason the competition is dubbed the ‘Unai Emery league’ and his former employers have got the taste of it in the first leg.

Less than five minutes of football and Manu Trigueros opened the scoring for Villareal. Neither team was able to settle on the ball in the initial periods of the game. But, Villareal was the more threatening of the two and forced several mistakes from the Gunners within the five-minute mark itself.

Minute 4: Chukwueze brilliantly moved in through the left channel and took on two defenders within the box. Although the Arsenal defence nicked the ball of the wide man, it only went as far as Trigueros who drills into the bottom left corner. Minute 5, Arsenal trail by one.

Just thirty minutes into the game and the hosts strengthened their advantage. Arsenal was incapable of defending a corner that was eventually guided into the net by an unmarked Raul Albiol at the far post. Moreno flicks the ball that was whipped in from the left corner towards their Captain at the back post. The No.3 had the easy job of firing the ball into a gaping net.

POOR PERFORMANCE SAVED BY A PENALTY

Apart from a penalty shout that was eventually overturned by VAR due to a handball in the build-up phase, the Gunners remained unimpressive in the first half. They had no conviction in their attack and was not precise enough in their build-up, often relying on Leno to clear the ball out of danger.

Villareal often strived to win the ball higher up the ground and the Arsenal midfield struggled to maintain possession as a result of the press. The first half ended with both teams sharing the ball fairly evenly, but the men in yellow were the clear favourites when it came to chances created. A comfortable first half for Unai Emery’s men.

PEPE FROM THE SPOT!

Goalscorer Trigueros fouled Saka inside his own box to hand Arsenal a penalty. A needless outstretched foot caught the Arsenal winger as he made his way through the Villarreal crowd. Pepe took the kick from the spot and slotted it right down the middle, reducing the deficit by one.

Arsenal was much more potent in the opening minutes of the second half. The nerves seemed to have settled and the away team were able to carry the ball forward with much better passing movements. They were also more confident in their press and looked set for a comeback.

In the 57th minute, their day went from bad to worse when the Referee Artur Dias decided to hand out his second yellow card for Arsenal midfielder Ceballos for his late challenge on Parejo.

Ceballos was already booked in the first half for lunging into a tackle against Villareal’s Foyth to stop him from breaking into the final third. Even though Ceballos protested the decision and was reluctant on leaving the pitch, the referee did not heed.

Defeat on the night – but a potentially crucial away goal.

The second half was full of talking points. Just minutes after Arsenal was awarded a penalty, Villareal decided to make life even worse for themselves. Étienne Capoue clattered into Saka in a needless attempt to win the ball and injured himself as a result. Although he left in a stretcher, the referee made sure to produce the second yellow card for the midfielder, levelling the playing field for both teams.