AT THE DEEP END 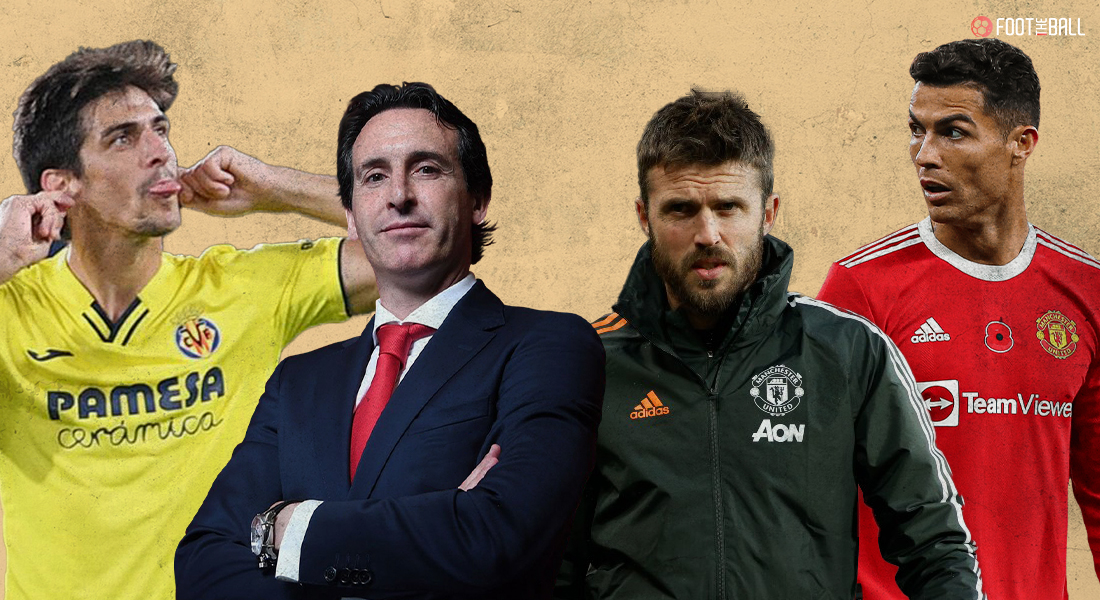 After a two-week break, the beautiful Champions League anthem will be heard again. Furthermore, to kick off the proceedings is an absolute cracker of a game as Manchester United travel to face Villarreal in a quasi knockout game. The stakes could not be higher, and with the surrounding drama surrounding both the clubs, this clash is sure to have a lot of eyeballs on it.

Manchester United played out a thrilling draw away to Atalanta last time out, saved a last-gasp winner by Cristiano Ronaldo. Villarreal coasted to an easy win against Young Boys at home. It leaves the group delicately poised, with Manchester United in the top spot, only leading Villarreal on goal difference, with Atalanta hot on the trails of both teams, while facing an easier fixture against Young Boys.

Added anticipation for this match comes in the form of the new face in Manchester United’s dugout. After Ole Gunnar Solskjaer was let go by Manchester United, it is down to Michael Carrick to get United out of this tricky tie with safety. On the other hand, Villarreal season has been disappointing, with the added focus of their coach Unai Emery ultimately unsuccessful link to Newcastle having derailed their momentum mid-season.

Villarreal come into the game in a healthy shape, with only prolific scorer Gerard Moreno a long-term absentee, having already been out for a month. He should make his return soon from a torn muscle but this clash comes too soon for him. Except for Moreno, Emery should have all of his charges to call upon against formidable opposition. Apart from the injury front, there are no suspension issues either for Villarreal, which means that Manchester United could be in for a tough task usurping The Submarines at their own turn at full-strength, something which can’t be said for Manchester United.

Although United suffered no new injuries in their abject performance against Watford, key defender Raphael Varane remains out of action. Joining him on the sidelines is his compatriot, Paul Pogba, who has a serious hamstring injury expected to keep him out till next year. Crucial absence is of Edinson Cavani. Cavani has looked like the best player on the field for United whenever he has played but his injury record has been less than ideal. With no expected date on his return disclosed as of now, the club remains in a waiting game with respect to the Uruguayan talisman. There are no suspension worries, as Harry Maguire’s red card against Watford keeps him eligible against Champions League opposition.

Villarreal haven’t been having a great season but they always seem to up their game for clashes against Manchester United. Nobody encapsulates that spirit as well as Alberto Moreno. The Spanish full-back used to play for Liverpool so he has a history with Manchester United. He never fails to rile up the United fans, and always turns up his game a notch further when facing the Red Devils. Moreno comes into the game having scored in his previous game, a 1-1 draw in La Liga against Celta. With the United RB wan-Bissaka struggling for form at the moment, the battle down that side could be pivotal in deciding the fate of the fixture.

For United, there is no need to look past their Champions League “Cheat code” that is Cristiano Ronaldo. An argument can be made that United would have been down and out of the tournament already if not for his late heroics in pretty much every game in the Champions League. A late winner against Atalanta and Villarreal, then a drawing strike against Atalanta has ensured United sit atop their group. New coach Michael Carrick will against look to maximize Ronaldo’s output as he had a frustrating outing against Watford. If Ronaldo fires, United often look inevitable in the Champions League.

While the United side look strong on paper, this is a tricky situation for new coach Michael Carrick, to drill a team in 2 days. Villarreal will undoubtedly make it hard for the English side. Games between these sides are always scrappy, decided by fine margins. As always, United’s no.7 could be the difference-maker. FootTheBall predicts Villarreal 1-2 Man Utd.