Yaya Toure scored twice in the first half on Monday as Manchester City began its Premier League campaign with an impressive 3-0 win over West Bromwich Albion.

Toure scored with two shots from just outside the area in the ninth and 24th minutes as the visitors dominated the match from the start. Captain Vincent Kompany headed in the third in the 59th in a fluid team performance that signaled that Manuel Pellegrini’s side will again be serious contenders for the league title after relinquishing the crown to Chelsea last season.

New signing Raheem Sterling also looked lively for City but fluffed his best chance to score with a weak effort when through on goal in the 41st minute.

The margin of victory puts City atop the standings after the opening weekend. And with Chelsea held to a draw, Arsenal losing and Manchester United and Liverpool both earning unconvincing 1-0 wins, this was by far the best performance of the first round. Even more worrying for their rivals is that City did it largely without star striker Sergio Aguero, who only came on as a substitute for the last 25 minutes.

He’s likely to be back in the starting lineup for a tougher test next weekend, when City hosts Chelsea in an eagerly anticipated matchup. 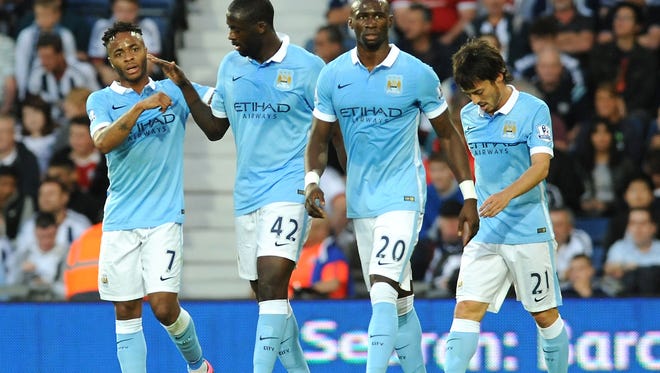 Toure and Kompany were among City’s most heavily criticized players last season when they failed to reach the high standards of the previous title-winning campaign. But both signaled they’re back to their best this time around.

Toure’s first goal came with a bit of luck as his low shot was deflected by Craig Dawson and trickled slowly over the line past a stationary Boaz Myhill in goal. The second was superb, though, as Wilfried Bony laid the ball off just outside the box and Toure curled an unstoppable effort into the top corner.

Sterling, who caused the West Brom defense plenty of problems with his speed and movement, was then sent clear on goal in the 41st but could only sidefoot a tame effort too close to Myhill.

Kompany’s third was also a bit lucky as he met a corner by the near post and the ball hit his shoulder before looping over Myhill. The Belgium defender celebrated by jumping up and down in front of the traveling City fans, showing just how badly he wants redemption after last season.

“We came here today knowing we had a point to prove,” Kompany said. “Me more than anyone else probably. … I just want to get back to my best level.”

Judging by this performance, Kompany and City are almost there.