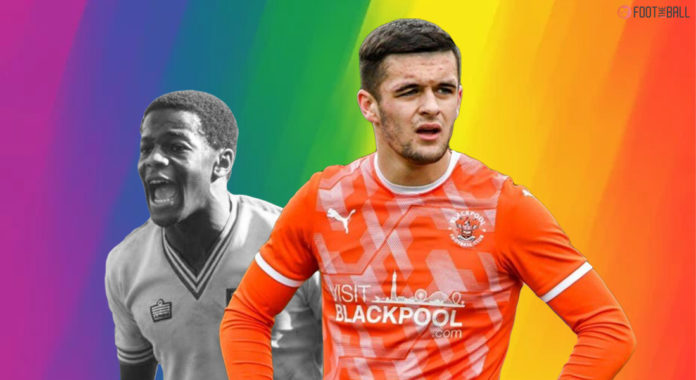 Clubs, football players, and fans showered messages of support for Blackpool footballer Jake Daniels, who became the first active male professional footballer in the United Kingdom to come out as gay. Daniels, who recently signed a contract with his team, said that this step might help others who are reluctant to talk about these issues openly.

However, Daniels is not the first footballer to come out as gay in the UK. It was Justin Fashanu, a promising young talent whose homosexuality became his biggest hindrance and ultimately led to his tragic death.. Born to a Nigerian father and a Guyanese mother, he was the first player to come out as gay back in 1990.

So, who is Justin Fashanu?

Justin Fashanu was born on February 19, 1961, in Hackney, London. After excelling at boxing in his youth, Justin Fashanu took up football. He joined  Norwich City and turned professional at the end of the 1978-79 season. After a promising 1979-80 season in which he scored a goal of the season against Liverpool, Fashanu scored 19 goals in the 1980-81 season, the third-best tally in the First Division behind Steve Archibald and Peter Withe.

Despite his impressive goalscoring record, Norwich were relegated. However, his performance had caught the eyes of several big clubs. And in the end, he signed for Nottingham Forest. His transfer was a record as it was the first time that a black player was bought for £1 million.

However, it was at Nottingham where his career started to go downhill. The team’s manager Brian Clough was disturbed by the allegations that Justin Fashanu usually visited gay nights club and bars.

He was also barred from training by Clough and scored only three goals in 32 games, just a year after having the best season of his life.

After a loan move to Southampton, he was sold to Notts County. Though he managed a respectable return of 20 goals from 64 games, he could not prevent his side from relegation.

In the next 12 years, Fashanu would play for 17 clubs.

Justin Fashanu- Coming out as gay

In 1990, Justin Fashanu gave an interview to the Sun in which he claimed he was gay. This was the first time that a player had openly admitted that he was gay, and it caused a scandal. Fashanu said that after that interview, no club offered him a full-time deal. Things got so worse that even his brother John told the media that his elder brother was an outcast.

In an attempt to save his face, John would go as far as to say that ‘I’d not want to play or get changed in the same dressing room as one of them.’

He was also subject to abuse by opposition fans during matches. After his admission, he spent the later parts of his career mainly in Canada and the USA.

In case you missed it: Mike Jackson: Burnley’s new manager making waves in the Premier League

His life had one final twist that would end in tragic circumstances. In 1998, Justin Fashanu was accused by a 17-year boy of sexual molestation at the footballer’s flat in Ellicott City, Maryland. After being questioned by the Police, Justin Fashanu fled to England because he thought his homosexuality would bar him from a fair trial.

However, on May 3, 1998, Justin Fashanu was found hanging in a lock up garage in Shoreditch. In his suicide note, he said that the allegations were untrue.

Fashanu was buried in the City of London Cemetery and Crematorium.

After his death, Justin Fashanu was named among the Top 500 Lesbians and Gays Heroes by the Pink Paper.

In 2020, Justin Fashanu was inducted into the English Football Hall of Fame.