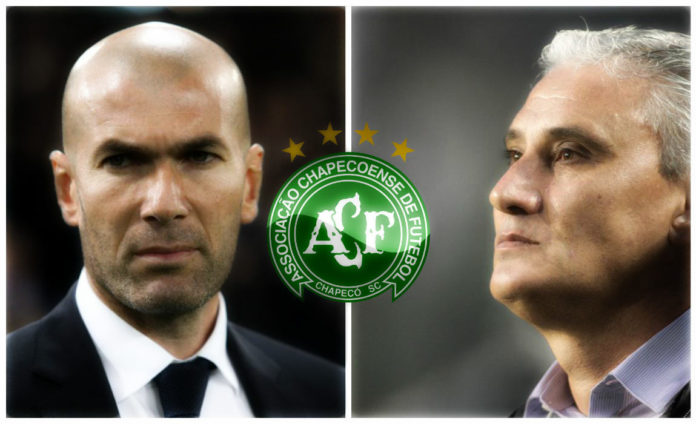 Real Madrid boss Zainadine Zidane and Brazil Coach Tite have offered their condolences of the people affected by Chapecoense tragedy.

The Chapecoense team were on their way to Medellin when there plane crashed with 77 people on board, 71 of whom have been confirmed dead.

The tragic incident claimed life of all but 3 players on board, and Zidane paid his condolences to the fallen heroes.

The Los Blancos boss was speaking in his pre-match press conference, where he started his speech by talking about the unfortunate event.

“Before you start this press conference, I send my support, and on behalf of everyone at the club, to the relatives and friends of the deceased in the accident in Colombia,” he told reporters.

“And, of course, the Chapecoense club and all their fans. We feel very much for what happened.”

Brazil head-coach Tite also spoke about the incident, “My sincere condolences to the families of victims of the accident in Colombia,” he said.

“We who live football, we feel a lot of pain and deep sadness at seeing fellow professionals in the exercise of their work, have their dreams interrupted by this tragedy.”

“God [give] comfort to all and give light and strength to move forward.”

Comeback is thy name