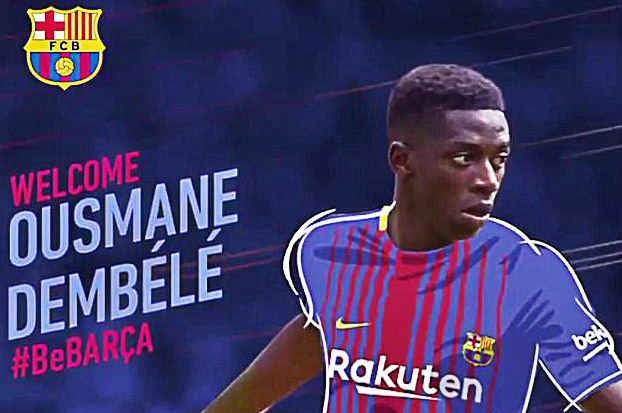 The 20-year-old winger joined the Catalan giants on an £97million transfer fee but the final figure could rise up to a mammoth £138m with add-ons.

The Catalan giants announced the deal on their official website on Friday and confirmed that the French forward will arrive in Spain on Sunday.

He will undergo a medical on Monday and then be officially unveiled at the Nou Camp.

This is Barca’s first big signing since they lost Neymar to Paris Saint-Germain on a world-record £198m transfer earlier this month.

Barca had identified Philippe Coutinho as their No 1 target this summer but Reds have rejected three back-to-back bids from the Catalan giants and have made it clear that they will not sell their prized asset.

And moving forward, Barca have now completed the signing of their other top target – Ousmane Dembele to replace Neymar.

However, reports claim that Barca are set to launch a final bid for Coutinho despite the Reds being adamant the Brazilian is not for sale.

Barcelona said Dembele is “one of the best young players in the world” and “stands out for his pace, ability to beat men and versatility”.

He can play on both the wings and completed 103 dribbles in the Bundesliga last season – more than any other player.

Dembele was keen to make a switch to the Nou Camp nd had gone on strike, skipping training to force his move through to Spain – which led to the club suspending the 20-year-old.

And Nou Camp boss Ernesto Valverde was delighted to finally land his man.

He said: “He is a player who guarantees offensive depth, the depth that we have lost and that we need.”

“He is a player who can play on both sides of attack, also in the middle, so that gives us a lot of possibilities.”

“He is quick, skillful and we hope he will be able to bring a lot to the team. We are very excited about this player.”

“Last year at Dortmund you could already see he was a good player. Barcelona were also looking at him back then.”

“Borussia Dortmund have been able to see in person just what a quality player he is and let’s hope he lives up to every expectation here and brings us lots of joy.”