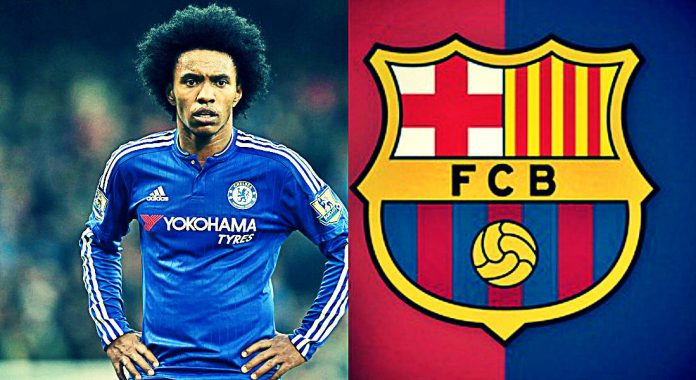 Barcelona have now shifted their focus on Chelsea star Willian after failing to make any progress in Coutinho and Dembele transfer deals.

Chelsea winger Willian has emerged as a shock name in the list of Barcelona’s transfer targets after the Catalan giants suffered a huge blow in their pursuit of a replacement for Neymar, who move to PSG on a world-record deal.

Barcelona are going through a crisis this summer. Losing Neymar to PSG have torn them apart – as they wanted to build their future around the Brazilian star. But the French giants dealt a huge blow to the Catalan giants by meeting his stratospheric buy-out-clause.

But they have failed to land their top transfer targets.

Mundo Deportivo claimed that Nice midfielder Jean Michael Seri is closing in on a move to Barcelona.

And now France Football report that Barcelona have identified Chelsea winger Willian as a back-up option, should they fail to rope in their top two transfer targets – Coutinho and Dembele.

Willian was linked with a switch to Manchester United this summer – and the Brazilian have revealed that he he almost reunited with former Blues boss Jose Mourinho at Old Trafford.

He said: “I worked with [Jose] Mourinho and I became his friend as well.”

“There were a few conversations with my agent.”

“Manchester United came to me, they talked with my agent, but nothing happened, because Chelsea would not negotiate me in any way and I’m very happy at Chelsea.”

During his four-year stint at Stamford Bridge, Willian has won two Premier League titles andthe Brazilian superstar was player of the year in Mourinho’s final campaign with Chelsea.

He was signed by Mourinho in 2013 from Shakhtar Donetsk.

Barcelona have also identified former Real Madrid man Angel Di Maria as they are desperate to line up a top-notch forward alongside Lionel Messi and Luis Suarez, but Willian is also another option in their wish-list.