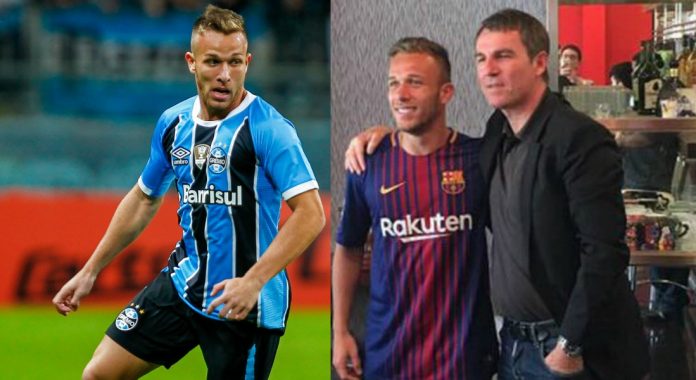 Premier League giants Chelsea and Manchester United are planning to hijack Barcelona’s move for Gremio star Arthur, according to reports.

Earlier last week, the Brazilian midfielder was snapped in a Barcelona shirt and reports in Spain had claimed that Arthur was on the brink of agreeing a deal with the La Liga club.

The Brazilian has now rubbished rumours claiming that he has agreed personal terms with Barcelona – although he has admitted that the Barca bosses have held talks with him.

And now Chelsea and Man Utd are planning to launch a move for Arthur, who has a £44million release clause in his contract at Gremio.

Reports claim that Red Devils boss Jose Mourinho has identified the wonder-kid as one of his transfer targets and he could replace Maroune Fellaini, if the Belgian opts to leave Man Utd in January.

But after a photo surfaced on the social media showing him in a Barcelona shirt, Arthur hit back at Barcelona paving way for a move to the Premier League.

“I did not sign anything. I’m a Gremio player

There is no way Arthur Melo doesn’t come now. Barça’s sporting director, our sporting director literally took a picture with him wearing a Barcelona jersey on. It’s 100% happening and i think he’s coming in January. pic.twitter.com/O0r6QHxFVA

“We have not started the negotiations.

“Then, if I sign the contract, I will be a Barcelona player, but this has not happened.

“It has to be something good for me and good for Gremio, which is my home.

“It was only a first contact for them to know my family and for me to meet them.

“Let’s take it easy. There is nothing defined but we did have a conversation.”