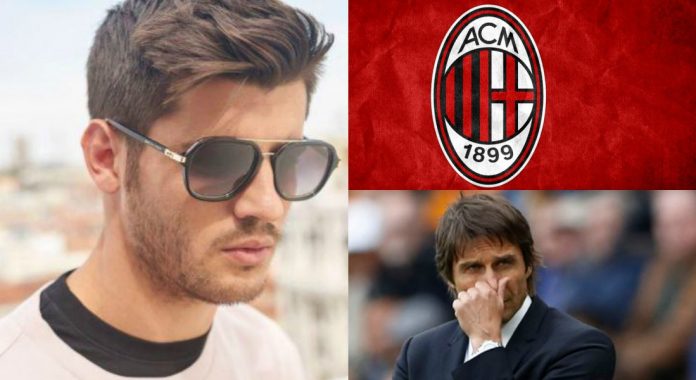 Chelsea target Alvaro Morata is set to join Serie A giants AC Milan, who have taken the transfer window by storm this summer.

The Real Madrid striker was heavily linked with a move to Chelsea after Manchester United gave up their chase for the Spaniard after roping in Blues target Romelu Lukaku for a whooping £75million.

Chelsea had launched a £62m bid for Morata, but the Spanish striker travelled with the Real Madrid squad for their pre-season campaign at the United States.

According to FootTheBall sources, the Real Madrid hierarchy were holding out for an offer of €90m (£79m) for Morata. It is believed that the Blues have cooled down their interest in the Spaniard and are eyeing to rope in £65million rated Borussia Dortmund striker Aubameyang.

And now Morata could move back to Serie A and join AC Milan – who have surprised the footballing world with their transfer business so far this summer.

According to Italian newspaper Gazetta dello Sport, AC Milan are closing in on a £61million move for Morata and are ready to offer the Spaniard a wage packet of £170,000-a-week.

If Moarta moves to Milan, he will take the club’s spending spree to over £200m and will become their twelfth signing of the summer.

This comes as a huge blow for Antonio Conte, who is desperately in search of a new striker as he does not want to keep Diego Costa at the club for the next season.

There has been reports that claim that Costa could join Besiktas on loan until the start of 2018 – and then move back to Atletico Madrid when the transfer embargo is lifted in January.

Chelsea have now identified Dortmund’s Aubameyang as a replacement for Diego Costa.

However, Dortmund have made it clear that they are growing impatient with Chelsea’s delay in a move for the Gabon striker.

The Blues have also been linked with moves for Torino’s Andrea Belotti and Manchester City star Sergio Aguero.

It seems that Belotti is set to leave the Serie A club after being left out of the kit launch for the new season and on the other hand Guardiola is willing to allow Aguero to leave Manchester City this summer.