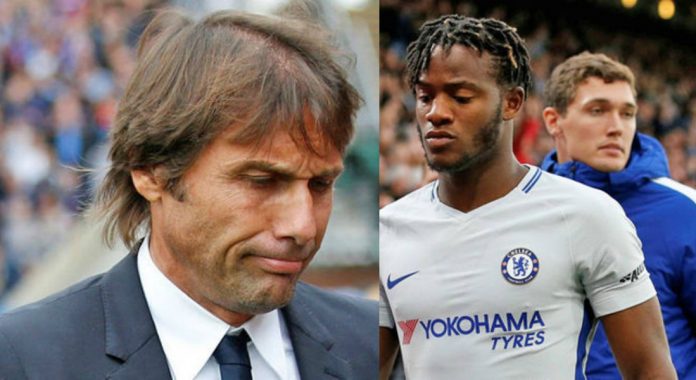 Antonio Conte ripped into his Chelsea players twice in the aftermath of their shock 2-1 defeat to Crystal Palace, according to reports.

Antonio Conte’s Chelsea  were left shocked on Saturday after an own goal by Cesar Azpilicueta and Wilfried Zaha’s late winner handed them two consecutive defeats for the first time this term.

After the game Conte urged his players to play as a unit in a bid to overturn their form.

But reports claim that Conte is furious with his players for their sloppy performance against Crystal Palace.

The Telegraph claim that Conte tore into his players for being complacent against Palace and insisted that they will struggle this season if they don’t improve.

Chelsea took on Palace without the services of injured Alvaro Morata, N’Golo Kante and Danny Drinkwater.

Victor Moses limped off the pitch after picking up a hamstring and has been ruled out for at least four weeks.

Michy Batshuayi’s time at Chelsea seems to be over after the Belgian failed to impress against Palace.

The Telegraph claim that Chelsea are now desperate to rope in another striker, who can play as a back-up to Morata.

Chelsea were heavily linked with Fernando Llorente in the summer but the former Swansea man opted to make a switch to Tottenham instead.

The Blues were also linked with moves for Christian Benteke and Jamie Vardy but now the London based club are monitoring the availability of Red Star Belgrade striker Richmond Boakye, who will be watched by scouts when he plays against Arsenal this week.