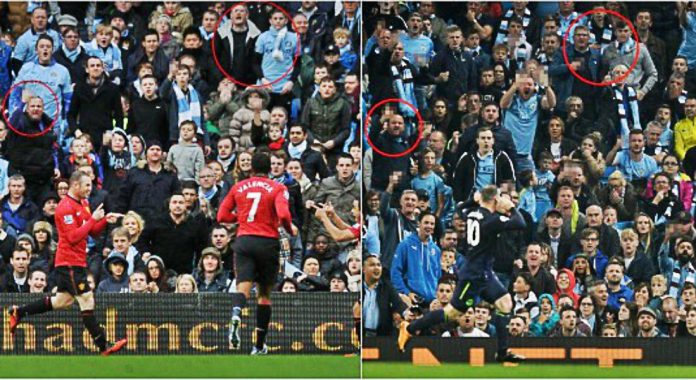 It was a déjà vu moment for both Manchester City fans and Wayne Rooney, as a stunning coincidence emerged when the former Mancheter United skipper netted his milestone 200th Premier League goal.

Rooney opened the scoring for Everton against Man City in an almost identical fashion as five years ago during his stint at Manchester United – and the same City fans were pictured giving him stick.

The Everton striker, who made a sensational return to the Goodison Park this summer from Manchester United, scored the opener for the Toffees in a 1-1 draw against Man City at the Etihad.

And his milestone 200th goal had a spooky resemblance to the second of the two he scored for the Red Devils against arch rivals City in December, just months after Man City clinched their first ever Premier League title.

And that was Sir Alex Ferguson’s last season as a football manager before he retired after an illustrious career with the Red Devils.

And Rooney played a quintessential role in United’s 3-2 victory at the Etihad that day as Robin Van Persie clinched the late winner, before the former Arsenal man guided the Red Devils to their 13th Premier League title that season.

And last night – after a lack lustre final season at Man United – Rooney showed that he still has a lot left in him as he grabbed his second goal in two matches for his boyhood club.

He also entered the elite Premier League 200 goal club and joined Alan Shearer in the list, with the Newcastle United legend ending his career on 260.

Very much like 2012, Rooney found the net after he tapped home a pass from the right, and this time around he English youngster Dominic Calvert-Lewin provided the assist.

And as Rooney ran to his right and jumped in the air to celebrate his milestone goal, the very same Man City fans were snapped on camera shouting curses at the former Man Utd skipper.

After the game, Rooney joked on Twitter: “Always nice to see a few familiar faces.”

He just loves to score his milestone goals against Man City.