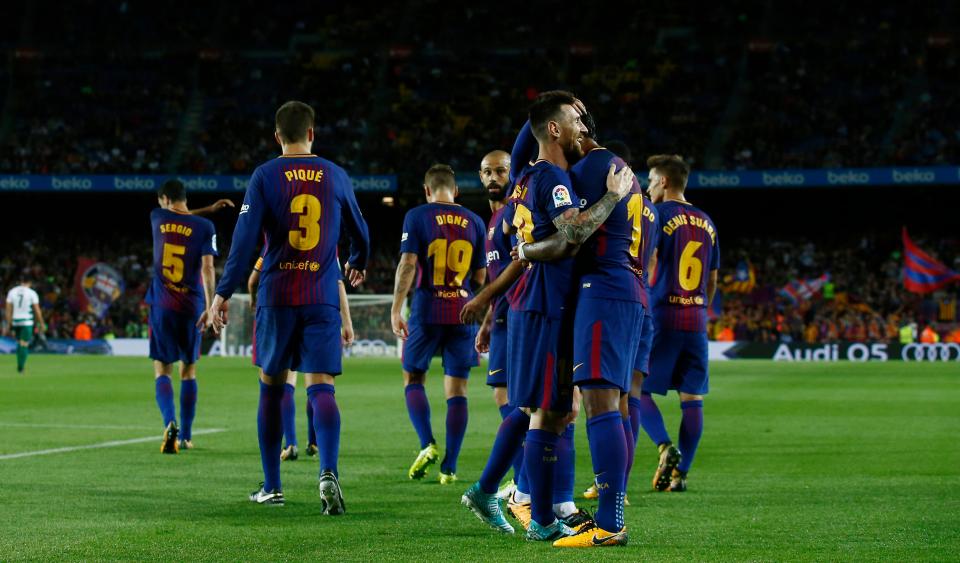 Leo Messi scored a hat-trick as FC Barcelona won 4-2 away to Deportivo la Coruna to be confirmed as La Liga Champions for the 25th time in their history and the third time in five years on Sunday.

Messi scored in the 38th, 82nd and 88th minute, after Phillipe Coutinho had put Barca ahead.
Deportivo showed spirit and drew level through Lucas Perez and Emre Colak, but Messi’s two late goals sealed Barca’s win, while also confirming that Deportivo join Malaga and Las Palmas in being relegated to the Spanish second division (Liga 123).

Barca had gone into the 35th round of play in the Spanish season with an 11 point lead over Atletico Madrid and with four games to play, as well as superior head to head and overall goal difference.

Although Atletico won 1-0 away to Alaves earlier in the day, Barca’s win means neither Atletico nor Real Madrid can now catch them in the 3 remaining matches this campaign.

The triumph means the club has completed a League and Cup double during coach Ernesto Valverde’s first season in charge after replacing Luis Enrique during the summer of June 2017.

Valverde has done an excellent job after inheriting a club which looked to be in turmoil after Luis Enrique’s reign, and his job was made more difficult when Neymar left to join Paris Saint Germain and the club struggled to find a replacement for the Brazilian.

Ousmane Dembele finally joined for 110 million euros, but was unfit and got injured in just the fourth game of the season, while Coutinho didn’t arrive until January and was unable to play in the Champions League, and January saw Javier Mascherano leave to play in China.

Barca’s Champions League exit to Roma in the quarterfinals of the competition will go down as the disappointment of their season, but Valverde still deserves praise for winning a domestic double with a squad, which for half a season at least was arguably weaker than that which only won the Cup in the previous campaign.

Sunday’s hat-trick highlights how important Leo Messi has been to Barca’s success, scoring 32 goals so far this season, more than anyone in Europe’s top leagues, and giving 12 assists, while Luis Suarez has netted 23 goals after a slow start to the season himself.