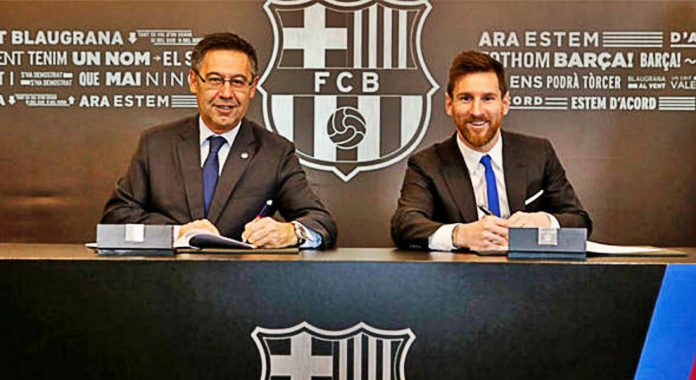 Lionel Messi has signed a new deal at Barcelona with a whooping £626million release clause.

The five-time Ballon d’Or winner’s new deal will keep him at the club until the summer of 2021.

His previous contract with the Catalan giants was set to run out at the end of the season and it had sparked rumours linking him with a move away from Barcelona.

European giants Manchester City and Paris Saint-Germain had shown huge interest in securing the signatures of Messi in the recent months.

But Barcelona acted quickly to tie down their most prized asset on a new deal – which means that no other club would be able to sign the Argentine magician unless they trigger the release clause in new contract.

The Barcelona bosses made sure that the release clause is large enough to make it almost impossible for any other club to even think of making a move for Messi.

It is compulsory for all Spanish players to have release clauses in their contracts and Barcelona endured their worst nightmares when PSG paid a whooping £200m up front to sign Neymar in August during the summer transfer window.

After Neymar’s departure it was being said that Messi would follow suit.

The Barcelona bosses recently tied down Andres Iniesta to a ‘contract for life’ and now they have secured the services of their most prized asset for the long-term.

Messi is in red-hot form this season with 16 goals to his name so far in all competitions despite not scoring in his last four games.