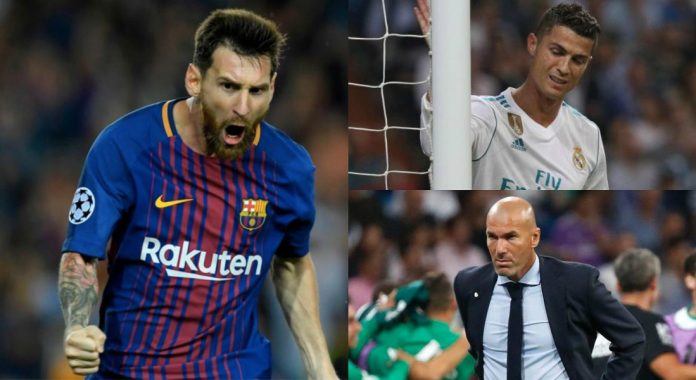 Real Madrid have failed to find the net for the first time in 74 La Liga games in their shocking defeat against Real Betis – and now Barcelona superstar Lionel Messi has the same amount of goals as the Los Blancos combined – nine goals in the Spanish top-flight competition.

The Los Blancos were the early favourites to win the league this season having clinched a La Liga and Champions League double last season. Barcelona lost Neymar to PSG and failed to land their top transfer targets in the summer and it was believed that Zidane’s men would have an even smoother ride in the Spanish top-flight this time around.

But the Los Blancos have made a disastrous start to their league campaign this season which has raised questions over Zidane’s attacking options.

Barca are now without the services of Ousmane Dembele, their club-record signing, but Valverde’s men continued their unbeaten run in the league after thrashing Eibar 6-1 on Tuesday as Blaugrana’s Argentine magician scored four goals against the Basque side.

Real Madrid now sit seventh in the La Liga table after Zidane’s men recorded 3-0, 2-2, 1-1, 3-1 and 0-1 in their first five games this season – and their worst fears hit them on Wednesday as Cristiano Ronaldo, who returned from a five-match ban, failed to rescue them from an embarrassing loss at the hands of Betis.

#Ronaldo is a genius. #Messi is a nightmare.#foottheball #Barcelona #RealMadrid #LaLiga pic.twitter.com/Shf2rgL8qq

Cristiano Ronaldo suffered a nightmare return for Real Madrid with the four-time Ballon d’Or winner launching 12 shots on goal but failing to find the net, in contrast to Messi’s incredible four-goal performance against Eibar – and this has left the Madrid hierarchy worried.

And while Ronaldo missed five games due to pushing the referee in the Spanish Supercopa, Messi hit the headlines every time for his incredible performances in the league – scoring a double against Alaves, a hat-trick against Espanyol before his quadruple on Tuesday against Betis.

Barcelona sit top of the La Liga table scoring 17 goals in five games and now Zidane faces an uphill task to turns things around quickly or they might lose their grip in the title race before the campaign even reaches the halfway mark.