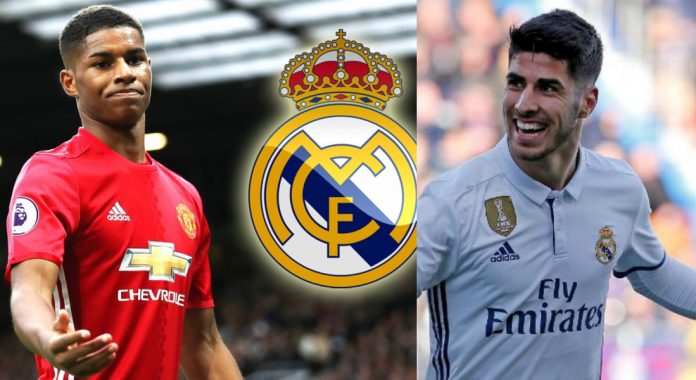 La Liga giants Real Madrid have a chance of roping in Manchester United prodigy Marcus Rashford only if they are ready to offer Marco Asensio to the Red Devils, according to reports.

Rashford has displayed incredible form for Man Utd this season and reports in Spain claimed that the Los Blancos are keen to lure away the England striker to Spain.

The Man Utd youngster has seven goals and five assists to his name in 14 appearances so far this season, and has started just nine matches.

Real Madrid have also been heavily linked with Spurs superstar Harry Kane in the recent months.

But, Real Madrid president Florentino Perez has made it clear that the Los Blancos have no plans to sign Tottenham superstar Harry Kane, and believes that the Spurs bosses will demand an astronomical transfer fee of €250 million from any club that will show interest in roping the Three Lions striker.

Zinedine Zidane, Cristiano Ronaldo and Florentino Perez are all huge admirers of Karim Benzema and are not willing to sell the French star to pave way for Harry Kane.

And according to Spanish website Diario Gol, the Los Balncos have shifted their attention to Rashford and are planning to launch move for the youngster next summer.

Reports claim that the Spanish giants have identified the 19-year-old as the perfect long-term replacement for Cristiano Ronaldo.

Asensio has shown huge potential and his recent performances for the Los Blancos have drawn the attention of top-flight European clubs.

And now the Spaniard has become one of the key players of Zidane’s Real Madrid squad, and has become a regular starter – ahead of Gareth Bale.

The former Espanyol star signed a new six-year deal with the Los Blancos last month with a reported release clause of £442million.