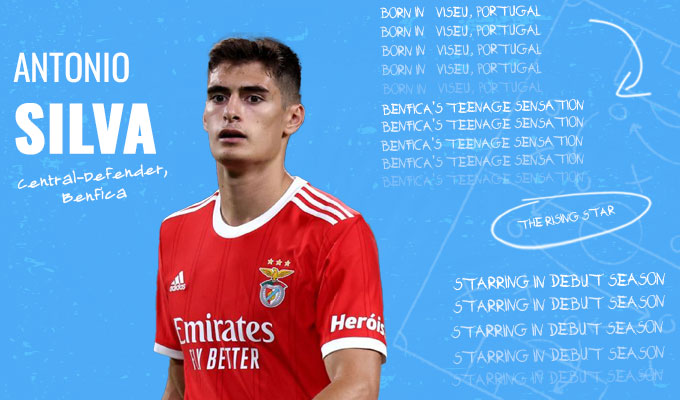 No club has earned more in the last ten years by selling players as much as SL Benfica. The Portuguese club has earned over £900 million, which shows their calibre in developing and unearthing young talents. Axel Witsel, Jan Oblak, Renato Sanches, David Luiz, Ederson, and Angel di Maria are just some of the top gems made by the club.

Even in the 2022 summer transfer window, the club sold Darwin Nunez for a deal worth up to €100 million. And as expected, the club is more than ready for the future transfer window with centre-back Antonio Silva. Manager Roger Schmidt thrust the Portuguese into the centre of the defence after Jan Vertonghen departed the club.

While it may have been a daunting challenge for any player making their debut season, Antonio Silva has been different. The 18-year-old has seamlessly slotted into the backline. The inclusion of Silva is why SL Benfica has the best defensive record in the league, conceding just five goals in 10 matches. Along with Nicolas Otamendi, they have made Benfica’s defence watertight.

Silva’s rise shows the efficiency of the SL Benfica system that discovers new gems that so often escape the eyes of the big clubs.

So, who is Antonio Silva, and how good is he?

Antonio Silva was born in Viseu in central Portugal and started his footballing career at nine, joining the local Penalva do Castelo. He then joined Repesenses in 2012, spending three years at the club. During this time, the centre-back would also come on the radar of several top Portuguese clubs. He even had multiple training sessions with Sporting CP.

Ultimately, he chose to stay in his hometown, joining local club Viseu United. However, after one year, it was sure he was too talented for the club. Antonio Silva would then move 180 miles to Lisbon, joining SL Benfica. And after struggling with homesickness initially, Silva became one of the top players in Benfica’s youth system.

Talent of the day:

The 18yo CB has caught the eye of European giants in his breakout season for Benfica, featuring 13 times & helping Benfica concede 5 goals in 11 Liga Portugal games (the best record in Europe top 7 leagues) this season. pic.twitter.com/UEr4Q5Gu3T

At the age of 17, he was promoted to the under-23s. He would play 14 matches in the Liga Revelacao, scoring one goal. The following season he would score three goals and provide one assist in 11 games. Silva would also feature in the UEFA Youth League ten times, helping them win the tournament.

With his fine run of form, he began knocking on the first team’s doors. And when Jan Vertonghen left the club, it created an opportunity for the Portuguese. The teenager has not disappointed in taking his chance with both hands.

The 2022-23 is the first season where Silva has featured regularly, and his stats are impressive. One of the reasons the teenager was promoted to the first squad was his ball-playing skills. And he has the stats to back it up. According to FotMob, Silva plays 6.8 accurate long balls per 90 minutes, the best figure by a defender.

Silva is not content with passing the ball from the back and likes getting involved up the pitch. Fbref stats show he also makes 5.52 passes per 90 minutes into the penalty area, putting him in the top five percentile of defenders.

However, ball playing is one of many skills he possesses. Silva can also be the no-nonsense defender when the situation comes. He averages 2.26 tackles, winning 1.38, putting him in the top five percentile of defenders. Dribblers often have problems facing Silva, who is the rock of Benfica’s defence. He contests 2.38 dribbles per 90 minutes, among the top one percentile. His tackling numbers against dribblers are also similar at 1.38 (top one percentile of defenders).

SL Benfica have continuously developed young talents that are technically astute, and Antonio Silva is just that. He is an avid reader of the game and positions himself according to the game. However, he must have these skills. The reason is that Silva is not the fastest player on the pitch.

Silva is often the last man in the backline during the club’s matches. However, he is often the man who makes the offside trap run. This mixture of skill and intelligence helps Silva negate his weakness and play to his strengths.

Under Roger Schmidt Benfica have become one of the best possession teams in Europe, averaging 67.9% (36:23 mins per/g) in Portugal in the process.

One of the best ways he tries to account for the lack of speed is by forcing his rival towards the line. This means that the only way for a player to get past him is to cut inside, which minimises the chances of Silva’s failure.

However, modern football is such that one cannot hide weaknesses all the time. This was especially evident in Benfica’s matches against Juventus and Paris Saint Germain. The opposition often managed to drag him out of his position, which usually leaves the defence exposed.

Silva is also superior aerially on both ends of the pitch, as evident by his well-taken goal against Juventus.

The Portuguese league has consistently been credited with giving talented youngsters a chance. However, an 18-year-old being slotted straight into the centre of the defence in one of the biggest clubs is quite an achievement, even by the league’s standards.

This shows how special of a talent he is. At just 18 years, Silva is not only facing Portugal’s but also Europe’s best and thriving. Imagine what a beast he would be with two years of experience at the top. Silva also plays alongside Nicolas Otamendi, which will bring him invaluable experience.

And remember, he has only played 16 matches this season and is already making waves. The more he plays, the more his skills will be sharpened, the fewer mistakes he will make, and the better player he will become, eventually.

According to several media reports, Manchester United, Liverpool and Paris Saint Germain (PSG) are all chasing the youngster. This is a testament to the fact of how talented he is. Being called up to the first SL Benfica team is an achievement. However, Antonio Silva has gone beyond establishing himself as an integral part of the team.

🚨 Manchester United and Liverpool are interested in signing Benfica 🇵🇹 defender Antonio Silva, according to Portuguese outlet O Jogo.#MUFC 🏴󠁧󠁢󠁥󠁮󠁧󠁿 and #LFC 🏴󠁧󠁢󠁥󠁮󠁧󠁿 will have to trigger the £87m release clause in the 18-year-old's contract in order to sign the defender, says the reports. pic.twitter.com/1EZPQRmvlU

It is still early to tell whether Benfica will want to part with such a youngster. However, his release clause is reported to be € 100 million, which will deter many suitors. So while the sky’s the limit for the young talent, it is unlikely he will leave the Portuguese club soon.

However, when his time does come, he will be more than ready to play for any top club, which now seems to be his destiny.