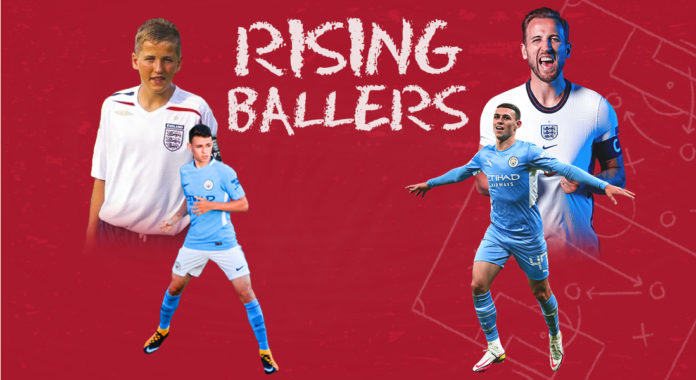 When talking about grassroots successes in football, you don’t have to look far to find motivating stories.

In fact, when we take a close look, more than 85% of the English Euros team started out in grassroots football. It’s a staggering figure, but it shouldn’t be a surprise. With countless grassroots level players in the top leagues – it seems the way to get into high-level football.

Let’s take a look at the current England squad and their grassroots beginnings that helped formed their success today.

More than 85% of the players that made up the 2020 Euros side started out at a grassroots level.

From the grassroots game to the #EURO2020 final…

We’re going to focus on a handful of the top players that owe their career success to grassroots football and their oh-so-close performance in the most recent Euros, where a valiant squad lost at the final frontier to Italy.

Grealish started out his successful football career at Highgate United, before joining Aston Villa at the age of six. A free-spirit trickster in his grassroots football days, he evolved his game slowly but continuously to become the behemoth he is today.

"I used to live and breathe football when I was a kid."

From playing at Highgate United, summer tournaments in Devon and even a bit of Gaelic football, @JackGrealish spent his childhood playing the sport he loved. ⚽️

Read more about his journey to the #ThreeLions 👇

The lifelong Aston Villa fan was signed by Manchester City following a transfer fee reportedly worth £100m. This was not only the most expensive transfer fee ever for an English player but the most amount paid by an English club. Although his first season at this new club was below expectations, Grealish should not be ruled out. After all, players who come from grassroots are no stranger to adversity.

Phil Foden started out his grassroots football career at the Reddish Vulcans, signing at Manchester City at the age of four. He is a Manchester lad through and through. In a team full of superstars, the presence of Foden is of great emotional significance to the team’s supporters.

Foden made his Manchester City debut at the age of 17 in 2017 with the club’s pre-season tour of the United States. Although Guardiola was initially called out for not giving Foden regular playing time, the decision paid massive dividends. Foden was protected from public scrutiny because of Guardiola’s handling. In turn, Foden could keep playing football as he did in his days of grassroots football. The end result is a streetsmart player who is also tactically astute.

Foden performed impressively in the 2020 Euros and has been integral to Manchester City’s performance in the 21-22 season.

England’s number 1, Jordan Pickford, also started life out at the grassroots level with the Washington Envelopes.

Pickford eventually joined Sunderland’s academy aged 8, progressing through the stages and signing for the club in 2011. The goalkeeper moved to Everton in 2017 where he has remained the #1 choice for the team. In a season of trepidation and problems, Pickford has been one of the bright spots for Everton. His loud, brash and confident playing style is a direct result of developing his craft at the grassroots level. He’s the undisputed No1 for the national side, being the archetypal modern GK.

From Washington Envelopes to the #EURO2020 final with the #ThreeLions .

Alongside his career at Everton, Pickford impressed during the 2020 Euros with a string of fantastic performances and clean sheets. While England lost the final on penalties, Pickford received no blame, as his performances throughout the tournament were a major reason why England made the final in the first place.

Harry Kane MBE is another player who started his career at a grassroots level with Ridgeway Rovers as his first club.

Kane joined Arsenal’s youth academy at the age of 8 but was released after just one season after being reportedly described as “not very athletic”. Kane returned to Ridgeway Rovers before signing a six-week trial with Watford at the age of 11. Following an impressive performance against Tottenham, Kane was then offered a midfield position with Spurs.

A shuffling of positions ensued, and so did a series of loans, but Kane’s never-say-die attitude and fighting spirit, forged in grassroots football, would not let him give up.

The rest, as they say, is history and Kane has performed incredibly well at Tottenham and despite expressing a desire to leave the club at the end of the 20-21 season, he remains in his forward role. Now under the coaching of Antonio Conte, Kane has said that he’s enjoying life at Tottenham, music to the ears of the club’s fans.

With the World Cup looming in November, a fit and firing Kane is going to be instrumental to England’s chances of “Bringing it home.” Will they?

Where to bet on the World Cup

Football fans looking to place a sports bet or two on the World Cup will be spoiled for choice come November.

With the English side looking so strong, we’re expecting football fever to spread throughout the UK – including the bookmakers. With countless good-quality and trustworthy betting sites available to UK players, the offers and promotions are expected to arrive in droves. “It’s Coming Home” became an anthem of sorts for the English contingent during the Euros. The same can be expected, multiplied by a thousand, considering the magnitude of the tournament! Rest assured, bets are going to be flowing in.

Of the top bookmakers, it’s Bet365 which stands just that little bit taller than the other bookies for World Cup betting. New bettors joining the sportsbook are able to claim Bet365 free bets with a huge £50 available to new players betting £10 when they sign up.

We’re also expecting a wide range of World Cup focused bonuses and promotions available at Bet365. Acca bonuses, free bets and enhanced odds are all expected to be on the horizon – it’s down to the players to keep their eyes peeled for them! If played correctly, it might not be just the World Cup which comes home, it could bring a lot of rewards as well!

There are more grassroots successes in the last 20 years than one can count – so much so that the majority of the British World Cup team is expected to be made up of grassroots players.

Fans will be excited to see the team perform after a bitter-sweet result in the 2020 Euros. Southgate’s England might just have what it takes to make it to the final once more – fans will just be hoping that this time they can finally seal the deal, more than half a century since their last success in this tournament.

With Kane, Pickford, Foden and Grealish all waiting for their shot at redemption, it may finally be the time.