THE DEEN IN THE HOUSE 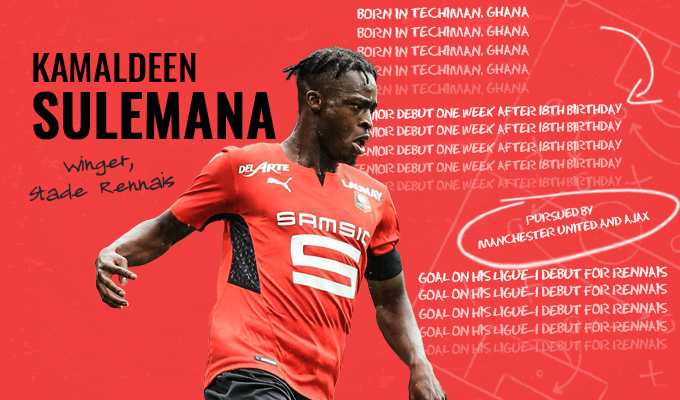 FC Nordsjaelland are fast becoming a goldmine of talented players coming through on their way to becoming established names in Europe’s top leagues. Euro 2020 star Mikkel Damsgaard was one such player who came through the Danish club.

Emre Mor and Stanislav Lobtoka are others who have gone on to join some of the biggest clubs on the continent. Kamaldeen Sulemana is the next Nordsjaelland graduate who is set to surpass the standards set by the alumni of the club before him.

Sulemana was all set to move to Ajax this summer before reports came through of a potential Manchester United hijack of the transfer. In the end, neither of the two giant clubs got their man with the 19-year old heading to Stade Rennais in Ligue-1.

Kamaldeen is one of the now many players who have benefitted from the Right to Dream academy in Ghana. Started as a small venture in Accra, the academy has grown in leaps and bounds over the past few years providing different avenues for young sub-Saharan African players to find their way into professional football.

The academy now owns Nordsjaelland and Kamaldeen was a part of the academy until his 18th birthday, when he signed a five year contract with the Danish club. The winger made his senior debut for Nordsjaelland a week later in February 2020 and quickly became a first-team regular. He made 13 appearances for the senior team that season, scoring 4 goals.

The 2020-21 season saw him being handed the number 10 jersey and Kamaldeen blossomed under the pressure. He scored 10 goals and provided 8 assists in 29 appearances, a very healthy return for a player of his age.

Kamaldeen made his Ghana debut in October of last year in a friendly defeat against Mali. He has since not been a part of the senior team in the AFCON Cup of Nations qualifiers but one would not be surprised if he was called back soon with the main tournament just around the corner.

The Ghanian moved to France with Stade Rennais this summer for a record fee for a Danish club, reported to be in excess of 20 million Euros. He scored on his Ligue 1 debut for the club, grabbing headlights as anyone familiar with him would expect him to.

Kamaldeen is an exciting winger who gets fans on the edge of their seats. His high direct goal output in the Danish Superliga shows that he is not just all flash. He likes to play on the left side of a front three, as a modern inverted winger but can operate across the forward line if needed.

It is clear from a look at his game that Sulemana is a very direct player. He ranked near the top percentile for dribbles per 90 and progressive runs per 90 amongst Danish Superliga attackers last season while also putting in a high volume of crosses per 90.

Looks a terrific prospect in the little I have watched of him. @alexfrco tweets frequently about Kamaldeen and hence made this for Alex. pic.twitter.com/vtQi2giQZU

Kamaldeen is also a player who is not shot shy. He likes to create space for himself by cutting in onto his right sharply and is able to get his attempt away quickly. He took 3.18 shots per 90 in the Superliga in 2020-21 and had a healthy 42.5% of his shots on target.

He showed all his best aspects on his Rennais debut, taking 3 shots and completing seven progressive carries in the 60 odd minutes he was there on the field.

Kamaldeen’s excellent athleticism is not quite encapsulated by his numbers. He has a very sharp turn of pace and a low centre of gravity which aids his playing style. At 5’9, he is not the tallest and is yet to fill out completely but his running is a nightmare for defenders.

Further, the youngster has an excellent first touch, not only technically but also tactically. He can beat people on the turn easily and exploit the space created. Kamaldeen is technically gifted clearly but his attacking decision making is very positive and highly impressive for his age.

Undoubtedly, his most beneficial characteristic is his directness on the ball. There are few sights a defender dislikes more than a pacy winger running right at you and that is what Kamaldeen looks to do every time he receives the ball. His desire to beat his man and get in behind the defence is invaluable.

This nicely showcases something I mentioned about Kamaldeen in the last @ScoutedFtbl handbook: just how good the timing + directness of his runs are in transition.

It’s simple but he nails it every time. Lowkey may well be his most promising quality imo.https://t.co/iO2VsxyFCE

Kamaldeen is also good with both his feet which shows in his high crossing numbers as he can take the defender to the byline just as easily as he can cut inside. His attacking skill-set is textbook for a modern day winger.

Defensively, Kamaldeen can still improve. He has the ability to press well but his positional awareness and tactical nous will only get better with time. The Ligue 1 is faster and of an overall better level which will only aid his development.

The move to Rennais is a smart move for Kamaldeen’s development as the club has made a name for themselves in developing young players. Jeremy Doku, cut from the same cloth as Kamaldeen, is attracting eyeballs after impressing at Rennais while it is only a matter of time before their golden boy Eduardo Camavinga moves to a major club.

Most take-ons completed during the 2020/21 Danish Superliga season:

Tune it to some Rennes games next season. 💨

Sulemana’s playing style is suited more to the game in England or Germany and therefore a move to either the Premier League or Bundesliga seems like a natural progression in his career. Of course, this would come after at least a couple of seasons at Rennais.

Manchester United do love a pacy winger but it is unlikely that Kamaldeen will be a target given the large number of youth prospects in their ranks with the likes of Anthony Elanga, Amad Diallo, Facundo Pellistri and Shola Shoretire already knocking on Ole Gunnar Solskjaer’s door. Bayern Munich could be potential suitors, especially if Leroy Sane and Kingsley Coman’s struggles continue.

The ceiling to Kamaldeen’s potential is very high and it is impossible to predict what the youngster will go on to achieve. If he continues on the path that he is on right now, then his future is very very bright.