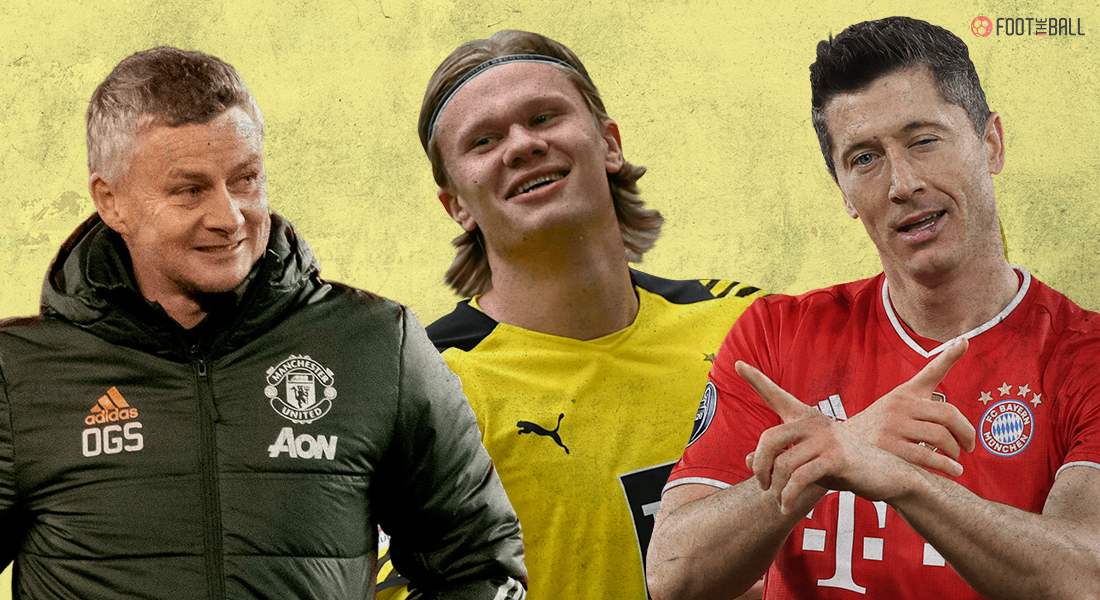 Bayern Munich and their love for signing top talents from the Bundesliga is well-documented. The Bavarians go after the best players from their rivals as evidenced just this summer with the acquisition of Dayot Upamecano from RB Leipzig. However, one club in particular strikes their fancy quite like few others.

With a new boss at the helm in Julian Nagelsmann, the @FCBayernEN players have plenty of reason to impress in pre-season.

Even more so for summer arrivals like Dayot Upamecano, with the new @Bundesliga_EN season starting next weekend! pic.twitter.com/WS0bwDKuGD

Borussia Dortmund have lost quite a few of their stars over the years including of course the record-breaker Robert Lewandowski. The Polish phenom vanquished Gerd Muller’s single season scoring tally last season and has shown no signs of slowing down. Even then, it came as no surprise when Bayern’s sporting director Hasan Salihamidzic said that they are “looking there [the Erling Haaland situation]. Otherwise, we would be full of amateurs.”

🇩🇪 Bayern Munich sporting director Hasan Salihamidzic has confirmed the club are looking at the possibility of signing Erling Haaland.

🗣“He’s a top player, and a great boy too. But he’s a Dortmund player. You have to look, otherwise we would be full amateurs.” pic.twitter.com/nrPvLbYnFB

Slight hyperbole on Salihamidzic’s part, but such is the craze about Haaland nowadays. The race for one of the hottest prospects in Europe has only just started and it will get a lot more intense next year.

The Norweigan attacker, though contracted with Dortmund till 2024, has a release clause of €75 million which becomes active in 2022. Needless to say, this has created quite a stir amongst Europe’s top teams which include all the heavyweights. With Bayern Munich’s interest now public, it provides an interesting overview of what they can do if Haaland does choose them.

The first question will certainly be pertaining to what happens with Lewandowski? The 32-year-old signed a four-year extension in 2019 which would mean at least one season of the pair together. That opens a new can of questions with the foremost being- can the two co-exist and play enough for each one’s liking?

Both Lewandowski and Haaland operate as lone strikers at their respective clubs and both are rarely benched. They are very much the spearhead and if they are to start together, then Julian Nagelsmann will have to figure something ingenious out. Can the coach use both players at once? That will be a totally new style of playing for Lewandowski and Haaland which they are not used to much.

Robert Lewandowski's agent has reportedly offered his player to several major European clubs. The striker has a contract at Bayern Munich until 2023. (Source: Sky Sports) pic.twitter.com/2RXl8h3uFr

The Pole has played a few times for his national team as part of a duo in attack but not at Bayern. In this regard, it will be fascinating to see if the Bavarians move on from their star man. Will Lewandowski get another extension if Haaland arrives? It is too close to call at the moment but anything is possible in this mad world of football.

Bayern Munich posted a loss of €150 million over the past 18 months and that can explain why they have been pretty quiet in the transfer market so far. Except for Upamecano, the only other addition has been teenage wing-back Omar Richards. Though they have a settled squad for the most part and the board has stated that they will not be spending rashly, certain concerns are there.

Salihamidžić on transfers: "With Upamecano and Omar Richards we signed two young players. Then we have to see what's possible. We are currently looking further into the transfer market, there's not much movement. But we're keeping our eyes open & will do what's possible" pic.twitter.com/sgCdsYh9lq

Benjamin Pavard has no proven backup yet with Bouna Sarr needing more time, while dynamic winger Douglas Costa has not been replaced yet. Nagelsmann has said that he is happy with the current numbers but if Haaland does arrive, there might be a few sales. Leroy Sane has blown hot-and-cold since his arrival while Lewandowski’s like-for-like backup is…Eric Choupo-Moting.

Corentin Tolisso is for sale this summer. Juventus and Inter have both shown interest in the Frenchman in recent months [@Koch_AZ, @Abendzeitung] pic.twitter.com/RMDGQCgvga

Correntin Tolisso is another who has found game time hard to come by due to loss of form and injuries. They all can be moved on for the right price. If Haaland does arrive, he will be nobody’s second-choice. The 21-year-old will have a whole host of options to choose from next year and he will definitely seek guarantees regarding his playing time especially if Lewandowski stays.

Chelsea had been heavily linked with Haaland this year but the valuation by Dortmund has thrown them off. Hans-Joachim Watzke, Dortmund CEO, has stated that only a “crazy bid” will assuage them to sell their star before 2022. The Blues swiftly moved on to sign Romelu Lukaku and it does seem that they will not be back for the Norweigan next summer.

"I think this week is the deadline [for Chelsea to bid for Erling Haaland]. I still think an “informal” offer will be the case here, cause nobody wants to lose their face. Only a crazy bid can change the game."

That leaves the two of Manchester United and Real Madrid as the likeliest outcomes. The Red Devils have held a long-drawn interest in Haaland and with Cavani likely to be moved on soon, he will become their starting option. Furthermore, Ole Gunnar Solskjaer has worked with Haaland before at Molde which gives further cause for optimism.

However, a major wrinkle in this deal can crop up in the shape of Mino Raiola. The Italian agent has a thorny relationship with United over his comments regarding the club and his clients there. That leaves Real Madrid with Los Blancos’ pursuit for the next Galactico. The most likely to sign is Kylian Mbappe who becomes a free-agent next year and has been heavily linked with a move.

ℹ️ Erling Haaland really wants to play for Real Madrid. Juni Calafat maintains close contact with the Haaland family, and everything indicates that the Norwegian will sign for Real Madrid in 2022. [@RMadridistaReal] 🇳🇴 pic.twitter.com/tRTws3IAa5

Florentino Perez is a big fan and if Mbappe does not come, then they will definitely go after Haaland. Bayern Munich’s name has thrown a wrench into those clubs’ plans and with the Bavarians’ dominance in the league and Europe, Haaland will be winning trophies if he chooses the Allianz Arena as his next home.