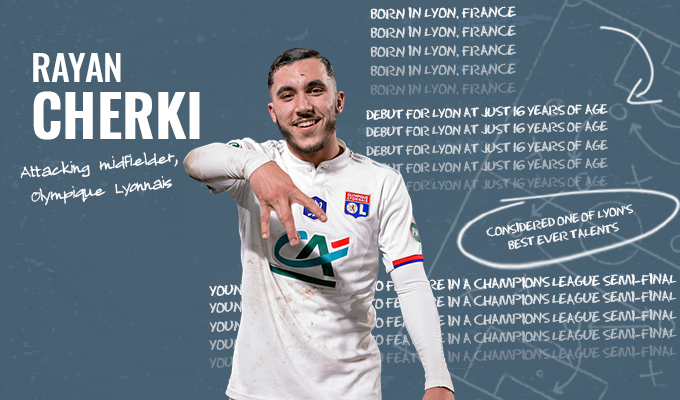 Ligue 1 has become a favourite shopping market for Europe’s elite with the likes of Alexandre Lacazette, Nabil Fekir, Thomas Lemar, Anthony Martial and Tanguy Ndombele making big moves from the French league. The new generation is set to carry on the mantle with Eduardo Camavinga, Jeremy Doku, and Houssem Aouar all being courted by top clubs on the continent.

One name that is set to breakthrough this season, which the casual viewer may not have heard of, is Rayan Cherki. A mercurial attacking player, Cherki has been touted as one of the most precarious talents in France and amongst the best ever to come out of Lyon’s academy.

Recently turned 18, the Lyon youngster has already caught the eye of anyone who watches the French league on a regular basis. Following the departure of Memphis Depay, he is set to become Lyon’s main man this season and he looks all ready to step into his boots with ease.

Cherki had long been earmarked as a prodigy in the Lyon academy. His promotion to the first team was just a matter of when and not if. His senior debut came in a 0-0 draw against Dijon in Ligue 1, coming off the bench to replace Maxwel Cornet.

His breakthrough match announcing himself to the world though came in the Coupe de France against Nantes. Still aged just 16, Cherki had a hand in all four goals that Lyon scored – scoring two and assisting two. He was unplayable on the night, a sign of things to come.

In the 2020/21 season, Cherki was a part of the first team setup throughout, making 30 appearances although his role was largely off the bench. His versatility of playing anywhere across the line behind the striker helped Lyon greatly, giving manager Rudi Garcia greater flexibility. He has also been a part of the French U16 and U19 setups and would have perhaps been called up to the senior team already if it were not for France’s unreal squad depth in attacking positions.

Rayan Cherki had four goals and four assists for Lyon in his 30 appearances last season which does not sound impressive but his actual playing time was just 11.1 90s, which is a decent impact in a bit-part role.

He also had 13.7 progressive carries per 90 last season, completed 5 dribbles per 90 along with 3.72 carries into the final third and 1.28 into the final area per 90. These stats lie well above the 95th percentile (except for goal creating actions which is 89th percentile) for all attacking midfielders and wingers in Europe’s top five leagues.

Cherki may benefit from a small sample but he has shown that he can link attacks as well as play the final ball with great efficiency.

The numbers in the above section are exceptional but they fail to encapsulate what Cherki is truly about – getting fans off their seats. He is just 5ft. 9 inches tall, giving him a low centre of gravity which allows him to change direction quickly. He can turn sharply and beats defenders with ease.

Cherki can play on either wing but his best position may be as the second striker with the freedom to roam and create. He is dominantly left-footed and likes to play in the right side channel often, allowing him to cut in to his favoured foot to an extent.

The Frenchman has exceptional spatial awareness – both while dribbling and in his off-the-ball movements. His decision making is very refined for his age and his game awareness allows him to make things look simple.

Often the case with young attackers is that their incomplete physical development hampers their game as they get bullied by physical defenders at the senior level. Cherki, despite his short stature, does not face this problem. He is stocky and has filled out already. He has signs of considerable strength while maintaining his fleet-footedness in an increasingly physical Ligue 1.

Cherki’s obvious strength is his ball-carrying and this is enabled by a multitude of factors like his build, game IQ and quick turning as discussed. He is effectively a left-footed Memphis Depay regen with some added flair. Cherki also showed signs of being deadly in front of goal for Lyon’s reserve and youth sides and should be developing that aspect into his game at the highest level soon as well.

Peter Bosz has a very exciting young Lyon side on his hands right now. Apart from Cherki, there is Bruno Guimares, Houssem Aouar, Maxence Cauqeret, and Lucas Paqueta in their ranks. They have added some experience in the form of Xherdan Shaqiri’s signing from Liverpool and Moussa Dembele’s return from Atletico Madrid. Despite the talent at his disposal, 18-year-old Cherki should be a first team starter this season for the French side.

Lyon underperformed last season under Rudi Garcia as they finished fourth in a Ligue 1 that was there for the taking. They need to show that they are amongst Europe’s elite if they are to keep Cherki for a decent amount of time. At 18, he should stay at the club for another couple of seasons as well to build on his talent with some serious game time at the top.

Rayan Cherki is the youngest player to make a Champions League semi-final appearance in the competition's history.

It will not be long before the big clubs come calling for the Frenchman but for now there are no links with any club. His game style perhaps suits the Spanish league more than it does the Premier League but with his skill set, there are very few limiting factors. It will not be surprising to see the big clubs lining up soon if Cherki gets the game time he deserves and Lyon could have a battle on their hands next summer.