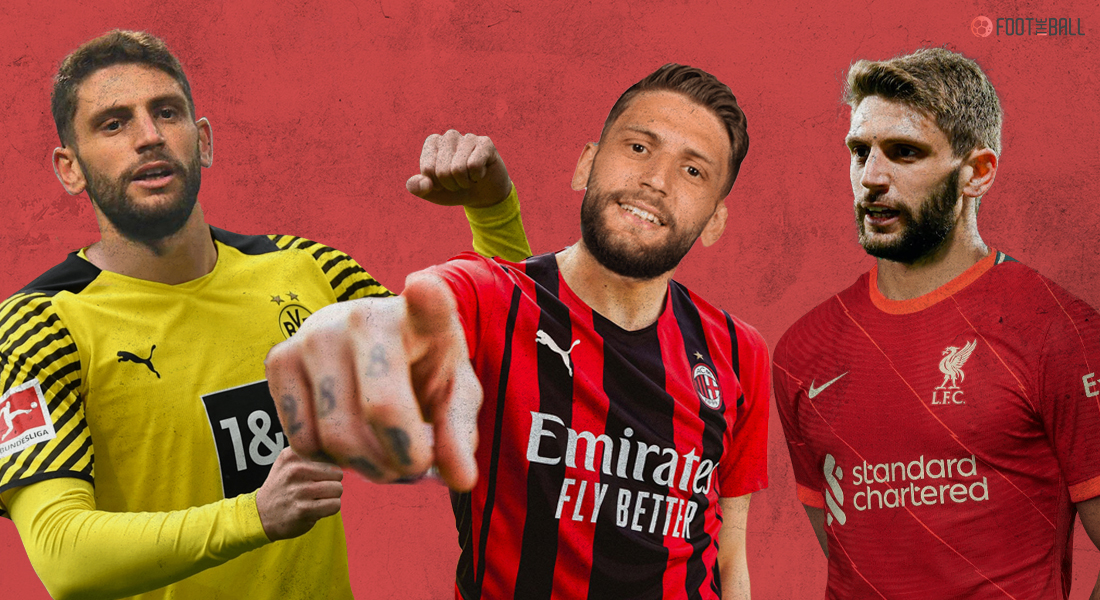 Euro 2020 Champion and a crucial piece in Sassuolo’s puzzle, Domenico Berardi has expressed his desire to depart from the Italian club. Berardi has been a crucial player for Sassuolo racking up 17 goals last summer. If the reports are to be believed, something has broken permanently between Berardi and the club’s directors. And therefore the Italian winner could be seen leaving the club before the transfer window ends. Sassuolo will be happy with any offer that crosses the 30 million euro benchmark.

The electrifying winger turned out to be pivotal for the Azzurri’s success in Europe giving them an extra attacking option. Whenever Ciro Immobile or Lorenzo Insigne had an off-day, Berardi was prepared to take the job of Mancini’s forward. He supported his midfield of Locatelli and Jorginho and was a silent protagonist in Italy’s European triumph.

Berardi could make his big-money move to England if the Reds offer the Italian winger a contract. The devastating trio of Roberto Firmino, Mo Salah, and Sadio Mane have been world-class operating in Klopp’s frontline. But last summer’s dip in form for the triplet resulted in Liverpool dropping points at their fortress Anfield.

What has happened to Liverpool's front three? 😳 pic.twitter.com/3EmFUT7vmd

Jurgen Klopp urgently needs a secondary for either of the three and Berardi could be plotted in any of the roles. Their Swiss star, Xhedran Shaqiri has been linked to Inter and the German’s next option is trusting the Reds’ academy players. Although Klopp might have some exciting options at his exposure, the youngsters have faltered when put under pressure. And Euro 2020 champions, Domenico Berardi knows how to battle an occasion and win a contest. Jota and Berardi could be the attacking bedrocks of the next great Liverpool side.

If the Italian joins hands with Liverpool, their attacking line could take England by storm. During the Azzurri’s glittering campaign, the winger had proved that he could be a deadly asset coming off the bench, something that Klopp could utilize this summer.

The Foxes or the directors of a fairytale, there’s never a dull moment whenever Leicester City are playing. A squad full of banter(Mostly Jamie Vardy), goals, and silverware, Brendan Rodgers and company have a dark blotch to get rid of. The Foxes start the season in flying fashion but falter during the business end of England’s top-flight which has seen them being knocked out of the Champions League spot twice in a row.

🏆🥇All glory to God pic.twitter.com/1aZBLIzNL3

If Rodgers wants to avoid a shambolic hattrick, he needs a backup for Jamie Vardy and Iheanacho. Iheanacho’s rise in form last summer helped Leicester grab crucial victories but if he fails to replicate the heroics of last summer, Rodgers might still be hunting for options. Patson Daka has also been roped in by Leicester but once again his inexperience might bother Rodgers.

Berardi isn’t synonymous with just a single position in a team’s forward battery, and Rodgers could play him alongside one of Iheanacho or Vardy. He could also operate as a right-winger helping the Foxes deliver the perfect crosses and constantly troubling defenders.

Jadon Sancho’s multi-million transfer to the Theatre of Dreams has put Dortmund under immense pressure. The forwards in their roster are quite young and Marco Reus is still looking for a long-term partner at the German club. Berardi could march into BVB’s eleven with his sparkling portfolio. He had 17 goals and 7 assists for Sassuolo last summer which is a staggering feat to achieve considering the defensive pedigree existing in Italy.

With Reyna, Bellingham, and Malen all belonging to the younger side of the scale, Berardi can add a hint of experience into Dortmund’s eleven. Another fact is that the Italian racks up several assists and continuously fabricates opportunities for his teammates. Although during his Italian tenure his striking partners weren’t too great, if he comes to Germany, Berardi will have Erling Haaland waiting for deliveries in the box.

Domenico Berardi’s number could rocket sky-high if he joins Dortmund considering the Italian’s’ quality and the already present quality in their front-line. And Berardi won’t cost the German outfit a fortune as the money earned from Sancho’s departure could be utilized in Berardi’s recruitment.

A more possible option in England for Berardi, the Hammers are under immense pressure to satisfy the needs of their fans, the manager, and the investors. West Ham United have been resurgent for quite a time now with Moyes constantly demanding improvement in standards. But the pandemic has drained West Ham’s finances resulting in the club enjoying a dry summer window.

The three attacking ‘Hammers’- Antonio, Benrahma, and Bowen have proven the Premier League what they are capable of. But they lack a swashbuckling forward constantly supporting them. Anyone remembers Jesse Lingard’s loan stint last summer; the English midfielder was the key in linking the forward line with the midfield weaving a galaxy of opportunities for Antonio and Benrahma.

Straight back to work💪🏾 happy to be back on the pitch 😁 #jlingz pic.twitter.com/4Uobrj8vbT

But now with Lingard departing back to the Red Devils, Berardi could be roped in as Lingard’s replacement. With a passing completion rate of 76.2% combined with 1.09 dribbles per game, the Italian could perfectly solve West Ham United’s conundrum. With the North London team looking to buy a player to showcase in front of the London Stadium, Berardi could be the perfect asset for them.

The front runners to capture Berardi’s signature, AC Milan, might perfectly suit the Italian. Staying in the Serie-A, earning a straight spot in the starting eleven, and partnering up with Zlatan Ibrahimovic, life won’t get better for Domenico Berardi. Milan has smartly spent their funds this summer and could save a few bucks for Berardi if the Italian agrees to join them.

This isn’t the first time that people are hearing Domenico Berardi and AC Milan in the same breath with the European champions being linked to a move away in the winter transfer window as well. And Berardi could add the flamboyance and flair missing in Pioli’s eleven with his electrifying gallops on the flanks combined with his inch-perfect deliveries.

Calahangolu’s departure to arch-rivals Inter has left a void in Milan’s midfield. With Berardi’s signature, they could add the tricks and swiftness they are looking for in the centre of the pitch. He adds versatility to Milan’s forward battery and Serie A is well aware of his goal-scoring capabilities. Berardi is a package and if Milan manages to capture his signature Stefano Pioli would get an attacker, a midfielder, and a dribbler all for the price of one.