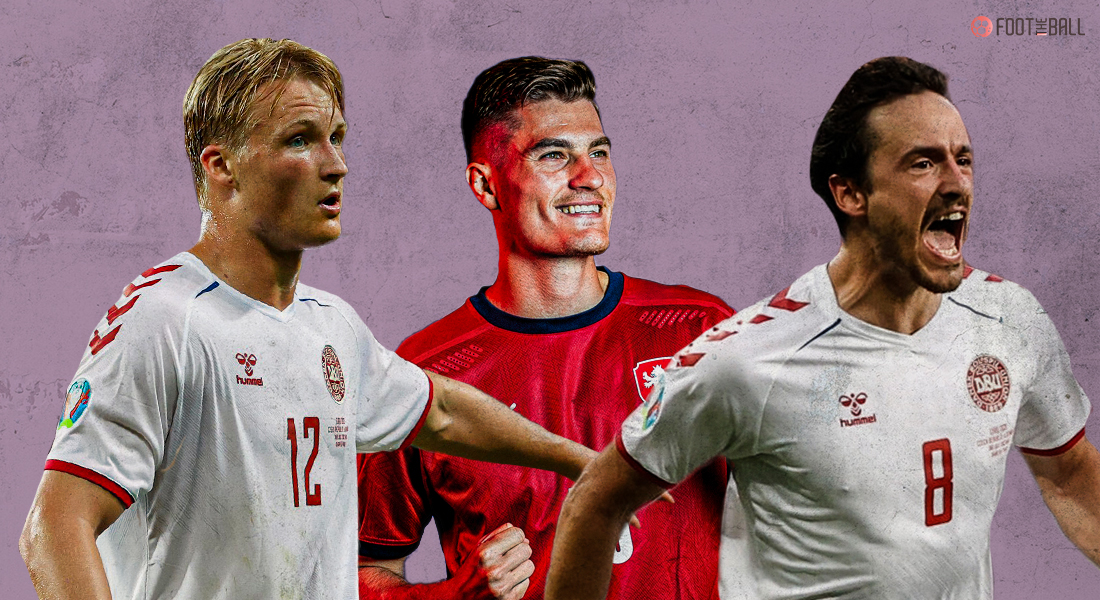 CZECH REPUBLIC VS DENMARK: STAR PLAYER OF THE MATCH AND 5 THINGS WE LEARNT

Denmark defeated Czech Republic 2-1 in the second quarter-final of Euro 2020 to book their semi-final berth at Wembley. The Danes were never overtly troubled by their opponents and two goals were enough to win, despite conceding. They have grown to be everyone’s second favourite team after their travails as they put in another commanding display.

The Czechs will be disappointed by how they ended their competition but can justifiably hold their head high after a superb run. FootTheBall brings to you the 5 things we learnt from this match and who shone as the star player.

DANES DOMINANT RIGHT FROM THE OFF

Kasper Hjulmand’s team were on the front foot for most of the match, covering all bases expertly. Their attacks were fluent and coherent while their defence hardly put a foot wrong. Braithwaite, Damsgaard, Dolberg got forward at every opportunity, running in behind the lackadaisical Czechs.

Their pace was too much to handle as evidenced by the two first-half goals scored by Delaney and Dolberg. Both of those came after sustained spells of pressure where they looked much more energetic.

🇩🇰 Denmark have breathing space and you can see how much that goal means to Kasper Hjulmand!#CZE 0-2 #DEN pic.twitter.com/vM1BDV4Cbc

Apart from the goals, they created numerous chances which further underlined how well they played. Despite going down with the very first Czech attack of the second half, they fashioned a few decent chances through Poulsen to increase their lead. Ultimately, the job was done in the first half itself.

After a dominant, if a little surprising win over the Netherlands last time out, it was expected that the Czechs will be able to put up a strong show once again. However, the final scoreline tonight flattered them given their lack of cutting edge in the final third. A timid first-half showing found them two goals down, with the first one coming inside five minutes.

Players to score 5+ goals at a single European Championship tournament in the 21st century:

Jaroslav Silhavy’s men seemed disjointed as they went in search of a response but found chances hard to come by. It was only after a double change at halftime that they seemed to find their mojo. Schick halved the deficit within five minutes and they seemed much more confident now. They remained on the front foot but Denmark stood firm to repel any danger.

Both Joakim Maehle and Stryger Larsen were superb in the win, running at the Czech defence all night long. They are known to be attack-minded and do look to create chances at every opportunity. Larsen took the corner from which Delaney scored while Maehle’s sumptuous cross was finished by Dolberg. The left wingback has been particularly impressive, using his speed and technical flair to leave the opposing right-backs in a flummox.

Save! Mæhle aims for the near post but Vaclík is there to keep Czech Republic hopes alive 🧤#EURO2020 pic.twitter.com/Z54tZ7CgWH

He was even denied one-on-one as he continued to cause problems. Denmark’s system heavily relies on them to do their duties effectively and the need to drop back is also emphasized. Their three man back-line converts to a back five when defending which makes it hard for opponents to break them down.

Denmark started the match brightly, scoring early as the Czechs looked to get their bearings. Silhavy’s side did try to play it patiently, knocking the ball around for much of the first half. That resulted in very little sight at goal, which maybe indicated their concern was not conceding again. That ultimately proved futile as the Danes eventually doubled their lead.

🇩🇰 Denmark have now scored 10 goals – the first time they have hit double figures at a EURO finals 🔥 #EURO2020 pic.twitter.com/RZte0lRa1s

That is why their attacking double changes produced a reply within minutes of the second half. Czech Republic did try their best throughout that period, trying to find an equalizer which ultimately did not arrive. Teams being too cautious has never helped so far, if a little luck is not with you.

This tournament has been a real rollercoaster ride with the heavyweights often being trumped in favour of the underdogs. These two teams were considered the latter in the beginning, but that was a big error. While the Danes won only one game to qualify from the group stages before blasting Wales, Czech Republic finished third and upset the Dutch.

Czech Republic started the 2nd half strong and got the goal inside the first 4 mins, but they couldn't find the equalizer, while Denmark also didn't convert any of their chances at the other end.#DEN are in their first major SF since 1992!#EURO2020 #CZEDEN pic.twitter.com/ypsDSFBv9a

Their journey so far has been immense for fans and neutrals alike, and the Danes are now in the semi-final. Not since Euro 1992 has such performances been witnessed by the Nordic nation. Euro 2020 had something for all strata of fans across the world. The race to crown the winner is as unpredictable as it can get.

STAR OF THE MATCH: JOAKIM MAEHLE

The Atalanta wingback had himself another fine game in a crunch clash. His assist with an outside-of-the-boot cross for the game winning goal was perfect as was his overall game. Maehle has been a top performer all throughout the tournament, constantly presenting himself as a threat down the left.

His pace and trickery helps in beating defenders to get in good shooting positions too. While defending, he did his duties admirably making four recoveries and two interceptions. However, it was his overall game that earns him the star player of the match from us.