Euro 2004 was a tournament rich in surprises and upsets. Powerhouses Germany, Spain, and Italy were all eliminated in the group stage. The Giant killing Greece knocked defending champions France out in the quarterfinal before eventually defeating Portugal in the final.

Greece’s triumph was seen as a major surprise as prior to this they had only qualified for two tournaments. Euro 1980 and the 1994 FIFA World Cup where they failed to win even a single game. 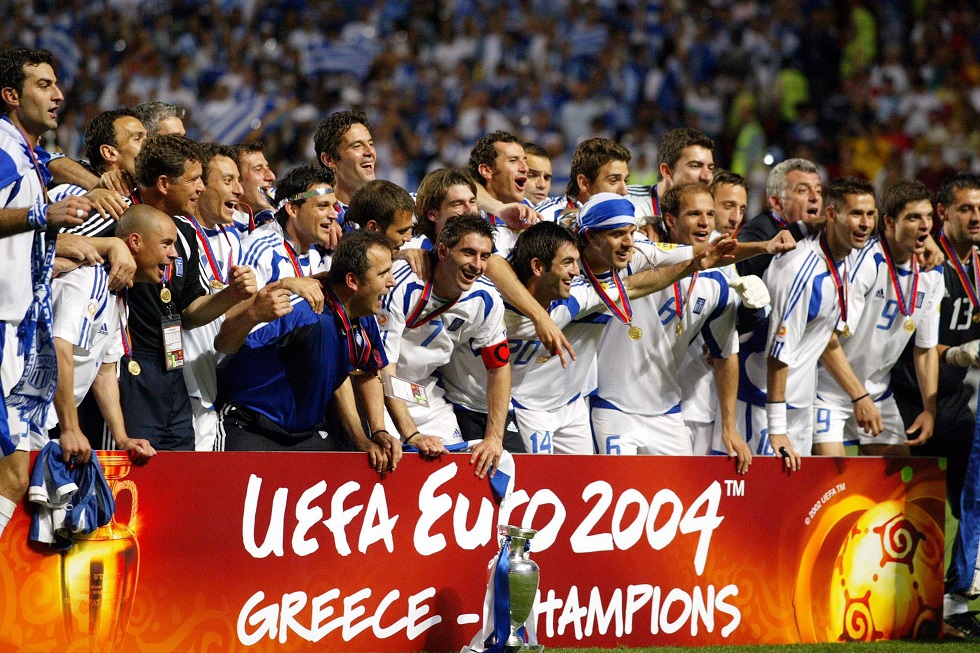 One of Football’s greatest underdog stories as Greece beat Portugal to win Euro 2004.

So how did a country at odds of 250/1,  who weren’t even expected to qualify, riddled by a fiscal black hole following the hosting of the 2004 Olympics, reaching the pinnacle of Europe’s elite?

If there ever was a good omen that helped foresee Greece’s triumph, it was the opening match of the tournament against hosts Portugal.  On a warm June afternoon at the Estadio Do Dragao home of Portuguese Primera Liga club FC Porto, Greece faced hosts Portugal. The optimism to perform at the tournament was rather low considering the poor showing at the last tournament which was a decade back.

At the helm was German manager Otto Rehhagel. He was known to be an iron-clad disciplinarian. Within the squad, there was the belief that under his tutelage, Greece would maybe be able to pull off an upset or two.

The opener got off to an electrifying start. Six minutes into the game, Giorgos Karagounis picked the ball from Paulo Ferreira’s mistake, dribbled past the Portugal half, he then unleashed a low shot past the Portugal shot-stopper, Ricardo. After taking the early, Greece began to push forward and went into the first half 1-0 ahead.

Five minutes into the second half Giorkas Sidaridis was fouled inside the box by a young Cristiano Ronaldo. Angelos Basinas stepped and converted the spot-kick to give the Greeks a reality far from the expectation as they took a 2-0 lead. Portugal were delivered the hammer blow in the opening game. As they pushed to find an opening, Cristiano Ronaldo scored in the 93rd minute but it wasn’t enough as the first surprise of the tournament kickstarted the campaign,

Next up for the Greeks was Spain. Taking in a massive advantage from their win in the first game, the mood in the Greek camp was elated. All of a sudden they had something to fight for. Spain boasting of the likes of Carles Puyol, Raul Gonzalez, Ruben Baraja, Ivan Helgueraa and Champions League finalist Fernando Morientes La Roja were a team to be feared.

Raul and Morientes combined to find an opener in the 28th minute as the latter curved a volley into the goal, past Antonis Nikopolidis. Twenty minutes through the 2nd half, Angelos Charisteas controlled a long pass from the center-half and caught the Spanish defence off guard to score between the legs of Iker Casillas. Greece held on to secure a 1-1 draw.

After gathering four points from two games, Greece’s last group match was against Russia. The Russsian had lost their opening two games against Spain and Portugal but proved to be no pushovers.

Dmitri Kirichenko of Russia scored the fastest goal of Euro 2004. The defence, in complete mayhem, were further punished when Dmitri Bulykin scored a powerful header past Nikopolidis. With the match between Spain and Portugal level, Greece were heading home.

One of the biggest shocks in Euros history?

The fortunes changed in the second half Zisis Vryzas scored for the Greeks to make it 2-1, concurrently in the other game Nuno Gomes put Portugal in front. Greece held a delicate advantage and barring any jarring moments they would qualify by virtue of a number of goals scored. At full time the scores remained the same and despite the loss, the Greece players shared tears of joy as they made it to the quarterfinals.

Greece were facing defending champions France. The Greeks sat back and played on the counter through Demis Nikolaidis, as Thierry Henry was Les Bleus major weapon. The well-coached and disciplined backline of the Greeks held  fort and went into the half time goalless as the French continued to attack.

Fifteen minutes into the 2nd half Greece lead a counter-attack as Bixente Lizarazu passed the ball into the centre for Angelos Charisteas who headed past a perplexed Fabian Barthez. The Greeks held on once again, knocking out the defending champions by the barest of margins.

Greece were up against the Czech Republic in the semifinal, their fairytale run was riveting from the perspective of a fan but many believed their journey would not tread any further. After all the Czech’s boasted of players like Pavel Nedved, Jan Koller, Milan Baros, Tomas Rosicky etc.

Greece capitalised on the situation and began to exert its presence over the Czechs. The Greeks displayed courage and determination that they weren’t going anywhere as they took the game to extra time. The deadlock was broken in the 110th minute after a  Vassilios Tsartas corner found Traianos Dallas who scored the only ‘silver goal’ in history as Greece reached the final.

Portugal had made amends for their opening day loss and had reached the Final on home soil. On paper, they were favourites to win it, but there was the psychological edge that their opponents possessed over them. The attacking arsenal of Deco, Pauleta, Ronaldo, and Luis Figo proved to be a constant menace to the Greek backline a the host began the game in electrifying style.

Despite being bombarded with the early threat the defence held their shape and remained focused. Greece stuck to their plan all game and another classic counter-attack led to a Greek corner. Stelios Giannakopoulos stepped to take the corner as Angelos Charisteas rose to score. Greece was on the verge of winning the European Trophy. Portugal hacked and sawed and brought on on Rui Costa and Nuno Gomes, but the substitution were to no avail, as Greece held on for victory.

Angelos Charisteas scored the only goal in the EURO 2004 final as Greece were crowned champions!#OTD | @EthnikiOmada pic.twitter.com/xhN6BWiCi7

None would have predicted what was to come, you best believe not even Greece did, but that’s part and parcel of the game we call football. Greece were the antithesis of the beautiful game. Well drilled and playing to their quality, the Greeks stifled their opponents of far superior stature and pulled off one of the greatest shocks in football.