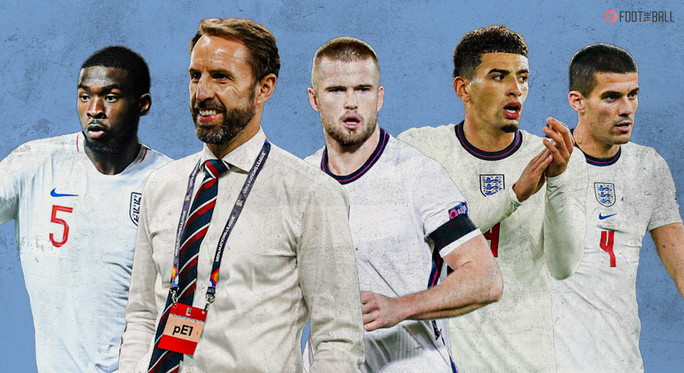 England have belatedly released their selections for this year’s European Championships. Though it is still a provisional squad with 33 players, the number of players who have not been selected have certainly raised eyebrows. With Trent Alexander-Arnold named in the list, there’s still a chance for the Liverpool right-back to miss out. But what about the players who deserved a call-up to this entourage at least?

Ben White, Conor Coady and Ben Godfrey have all been selected in the defence. Two of them may even make the cut for the Euros. Fikayo Tomori and Ezri Konsa should rightfully feel hard done by. In attack, the big talking point has been the exclusion of Patrick Bamford after the Leeds forward’s productive season.

FootTheBall breaks down the baffling choices of the Three Lions regarding these players:

The Chelsea loanee had an excellent second half of the season. Joining AC Milan in January, Tomori has played 17 games. He started in 16 of them and has been a revelation at the back for the Rossoneri. In fact, Tomori’s performances have kept Milan captain Alessandro Romagnoli on the bench as Milan secured Champions League football.

Fikayo Tomori p90 in Serie A this season:

He has kept clean sheets in five consecutive games. 💪 pic.twitter.com/9m0ltivO1D

The 23-year-old closed out the season with six consecutive clean sheets. That took his total shutouts to eight for the season. His most impressive performance was undoubtedly against Juventus. Milan won 3-0 with Tomori getting on the scoresheet as well. He finished the match with four duels won as well as a game-high nine recoveries. He is also averaging a passing accuracy of 89% and racked up 60 clearances in four months.

Away from the numbers, Tomori has been praised as one the quickest centre backs in the game. His ability to catch up with attackers and get his foot to the ball for clearances would have surely helped Southgate’s squad. Given the nature of his strong finish to the season, Tomori will feel hard done with some of the selections that were made ahead of him.

The Aston Villa centre back is another who would have felt quietly confident of making it. Konsa has been an ever-present in the Villa squad alongside his national teammate Tyrone Mings. The 23-year-old is Europe’s premier shot blocker and has matured consistently over the past few seasons. Calls have been getting louder for him to be included in the squad back in March as well but this non-selection is a real puzzler.

⛔ Ezri Konsa has blocked more shots than any other player in Europe's top 5 leagues this season (46) pic.twitter.com/RMO5V02Gkz

Konsa is widely considered even better than Mings, with the latter noted more for his leadership skills. Konsa is a better reader of the game and has better passing accuracy (85%) as well as tackling rate (52%). Even though like Tomori, he has not made a senior appearance yet, neither have White or Godfrey. Konsa has also done his part in helping the Midlands club keep 15 clean sheets this season.

Great to have fans back in the stadium this afternoon! Happy to see out the season with a win! See you villains next season 🙌🏾 #UTV pic.twitter.com/nJaYMBFt7f

Extremely athletic, good in the air and possessing good speed, Konsa would have surely been an upgrade from the choices that Southgate seemed to have focused on. Both he and Tomori have had much better seasons with respective clubs as well.

The Leeds frontman just wrapped up his most fruitful season in front of goal. His 24 goal contributions in the league (17 goals, 7 assists) have firmly established Bamford as one of the most consistent threats. However, Southgate still seems reluctant to give the 27-year-old a well-earned call-up.

Leeds have been one of the most exciting sides to ever play in the top flight this season. Bamford has been a key figure with his hold up play, ability to offload the ball into space and quick movement in the box. Furthermore, he is a stout header of the ball and even has sufficient pace to get by defenders one-on-one. Bamford also finished the season with three goals in his last four games.

🔥 Our number 9! What a season! pic.twitter.com/XAQIWiCAZs

In terms of English scorers, he only trailed Golden Boot winner Harry Kane this term. He is also a regular in terms of clearing the ball on his defensive duties, notching up 37 clearances and 10 recoveries for Marcelo Bielsa’s side.

PLAYERS WHO MADE THE CUT

BEN WHITE: The Brighton centre-back’s selection has caused some consternation amongst its own fanbase, who feel Lewis Dunk could have been a better selection. Indeed, White played his first full season with the Seagulls was nothing spectacular. While Konsa and Tomori were earning rave reviews, White was struggling in dealing with the rigours of the top flight.

🗣 Ben White was caught out a little by his @england call.

"I am really grateful to Gareth Southgate for giving me an opportunity to potentially be a part of his squad at a tournament. I would be thrilled to be part of it and if I am, I won't let him down."#BHAFC 🔵⚪

His clearances (50) and passing accuracy (83%) are less than his Milan counterpart. Also, throw in the fact that Brighton struggled mightily this season finishing 16th. White is also a fresher in the squad and Southgate’s explanation of choosing him because he is a “younger player” than Dunk is mind-boggling. Tomori and Konsa are also of the same age, Gareth!

BEN GODFREY: The Everton man, another 23-year-old, has been used primarily either as a right-back or in the centre of the defence. His unfamiliarity with the top-flight was an undercurrent to his play this season. Godfrey was found out of position on many occasions and has been guilty of poor judgement in dealing with long balls. But he does come with his merits as well.

Ben Godfrey tackles are even better with fans. pic.twitter.com/vY8jdCazIw

Godfrey has the second-highest tackle success rate this season (79.7%) and is very quick. His pace has helped him cover the runs of opposing wingers sufficiently in spite of a late start at times. Though Everton had an up-down season, Godfrey’s role in the side was never under serious threat. However, choosing him over Tomori has still been a head scratcher in the first place.

CONOR COADY: Wolves have had a terrible season, finishing 13th in the table. Their defence seemed to have lost its rigidity and control which has led to Coady enjoying an average season. The club captain has not looked like the towering presence at the back, with frequent ball losses and an alarming downgrade of pace.

Congratulations to the captain, who has been named in Gareth Southgate's provisional 33-man squad ahead of the Euros.

Though he is a likeable character in the national team squad, Coady’s selection has certainly raised eyebrows since Tomori and Konsa were also available. The overlooked duo have markedly better seasons and would have been strong deputies for the likes of Harry Maguire and John Stones. Coady’s adeptness of playing in a three-man defence however may have worked in his favour.

With seven players set to leave by next week, there’s a possibility that all of the ones mentioned above will be left out. Even Watkins looks the most likely casualty in the Three Lions’ front line. However, given that it is Southgate, nobody would be too surprised if he does decide to take a few of them along. But the rejections of the three players discussed here is sure to make for a long and heady debate, especially if England falter at the tournament again.