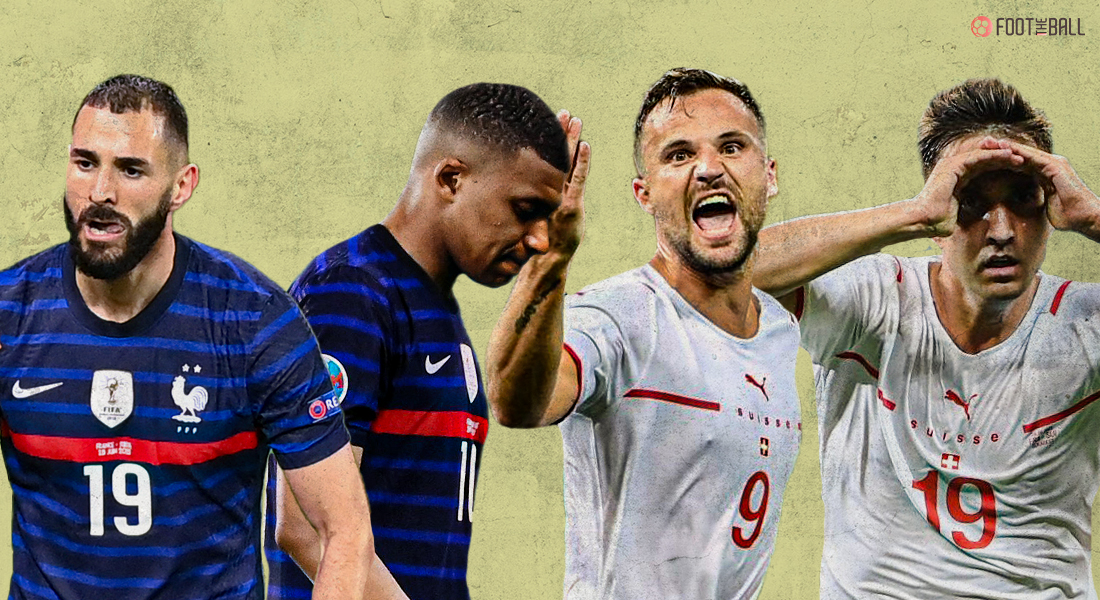 5 Things We Learned from France vs Switzerland in Euro 2020 Round of 16; Kylian Mbappe misses in penalty shootout, Switzerland qualify for Quarter-finals

France were the bookies’ favourites to go through comfortably, but Les Bleus blew their two goal lead deep into the 90 minutes of regulation time as Switzerland came back to take the match into extra time and eventually to penalties.

Kylian Mbappe was the only one to miss from 12 yards from either of the teams as France exited the tournament in the Round of 16 after an unconvincing display in their match with Switzerland.

FootTheBall takes a look at the talking points from the match as France were ousted by a brilliant Switzerland side 5-4 on penalties in Bucharest in Euro 2020.

1) BACK THREE BACKFIRES FOR FRANCE

Didier Deschamps opted to start with a back three as he implemented the 3-4-1-2 formation in their crunch clash with Switzerland in the Round of 16 and Les Bleus had to pay for it dearly.

Clement Lenglet, who has so far struggled for minutes, was the one whose error led to Switzerland’s opening goal.

The Barcelona defender didn’t rise high enough to check Seferovic as the Swiss forward headed the ball home to give Switzerland a precious 1-0 lead in the first half.

Lucas Hernandez and Lucas Digne were both injured and hence Deschamps had to change France’s formation, but it didn’t work out very well for the Frenchmen as they went behind to an inspired and reinvigorated Switzerland.

In the end Clement Lenglet was replaced by Kingsley Coman at half-time as Deschamps reverted to a defensive line of back four.

The Frenchmen possessed perhaps the strongest forward line in Euro 2020 in players of the likes of Antoine Griezmann, Kylian Mbappe and Karim Benzema. But none of them was on target for Les Bleus in the first half.

The French didn’t even record a single shot on target in the first half of the match in Bucharest. In stark contrast, the Swiss were ultra-clinical, converting the only chance they had on target to gain a deserving lead as the players headed down the tunnel at half time.

Les Bleus took full advantage of the change in formation in the second half as finally their fearsome front three started clicking together.

And Karim Benzema scored the equaliser just two minutes after Rodriguez had missed the penalty on the opposite end of the pitch. The Real Madrid forward latched on to a pass by Kylian Mbappe before slotting home

And another couple of minutes later France had taken the lead as Griezmann turned provider for Benzema with the former Lyon forward nodding the ball into the back of the net from close range.

Paul Pogba too capped a brilliant outing for France with one of the goals of the tournament from outside the box that found the top right corner of the goal as it looked game over for Switzerland at that point.

The Swiss were the better team as the second half started in the National Arena in Bucharest, creating chances and troubling the French time and again, but the dream seemingly lasted for them only until the 55th minute.

They won a penalty that made things really difficult for France, but Hugo Lloris saved the Swiss effort from Ricardo Rodriguez. The 28-year old had missed 3 of his previous 6 penalties before he saw his latest effort being saved too.

And from that moment on, Xherdan Shaqiri and company in the Romanian capital were seemingly on the downside as France took the match by the scruff of its neck after reverting to a back four defensive line in front of Lloris.

But Seferovic gave them hope and redeemed himself after his miss five years ago in Euro 2016 in the Swiss’ match with Poland as he scored another header, this time from a cross from the right wing as the score line read 3-2 with almost 10 minutes to go in the match in Bucharest.

4) SWITZERLAND DON’T KNOW WHEN TO GIVE UP

After Paul Pogba’s absolutely outrageous screamer from outside the box, there was little hope for the Swiss as everyone thought that the French would easily win with 15 minutes to go.

But first Seferovic in the the 81st minute and then unlikely hero Mario Gavranovic in the very last minute of regulation time scored for the Swiss as they clawed their way back into the match from a seemingly hopeless situation.

Earlier in the day, Croatia had also achieved the exact same feat as they came back from two goals down to take the match into extra time with Spain.

And Switzerland emulated them with the greatest attention to detail in Bucharest as they themselves came back from two goals down to take the match into extra time.

5) MBAPPE FORGETS SHOOTING BOOTS AT HOME, FRANCE OUT SWITZERLAND THROUGH

Both teams played cautiously as extra time followed through in Bucharest in the National Arena. And the Swiss were able to contain the French attacks as penalties loomed in the offing.

Once the full-time whistle blew, it was down to individual brilliance to determine the collective fate of both the teams.

The Swiss displayed commendable composure and tranquility to slot all five of their penalties beyond Hugo Lloris.

No person missed any chance until it was Kylian Mbappe’s turn to take the very last penalty. The Frenchman has endured a frustrating Euro 2020 campaign in which he didn’t score even a single goal.

And in Bucharest too he missed his effort from 12 yards as Switzerland made it to the quarter-finals where they will play Spain in St. Petersburg and get a chance to book their place in the semi-finals of the tournament.

France go back home after winning just one match in their entire Euro 2020 run, meanwhile Switzerland are, on the other hand enjoying a dream run in the tournament as they live to fight another day